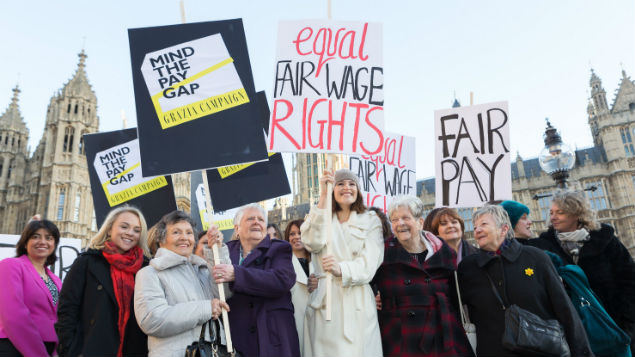 Cast members of "Made in Dagenham" protest with women from the original 1970 strike for equal pay. PHOTO: Vickie Flores/LNP/REX/Shutterstock

Draft regulations to boost equal pay include plans for the Government to publish gender pay gap league tables naming and shaming employment sectors and organisations. John Charlton asks if this will really help close the pay gap, and what employers can do to be ready.

Key to this is the recent announcement by Education and Equalities Minister Nicky Morgan that private- and voluntary-sector employers with more than 250 employees must publish gender pay gap figures, showing percentage differences between the gross hourly pay for male and female employees, annually, from April 2018 onwards.

This data must be published on employers’ websites and will link to a government site where gender pay gap league tables will also be published. Precise details of how the tables must be compiled, and what they will comprise, are not yet available. However, they will probably be compiled on a sector-by-sector basis.

An indicator of what this may look like was January’s publication by the UK Commission for Employment and Skills (UKCES) of gender pay gaps in 19 sectors ranging from financial and insurance, through agriculture, forestry and fishing, to waste management.

Based on gross hourly pay, the UKCES says that the gender pay gap in the financial and insurance sector is almost 40% with men earning, on average, £23 per hour and women £15.

Other sectors where there are large pay gaps include information and communications where the UKCES gives hourly earnings of £21 for men and £15 for women, and energy and air conditioning where men’s hourly pay is given as £18 and women’s as £12.

For most sectors however, the UKCES figures indicate that the gender pay gap in gross hourly pay is relatively small, at around £2.

These figures indicate that financial and insurance companies may be at the greatest risk of reputational damage when the league tables are published. Given the large bonuses paid in that sector, the gender pay gap may be, frankly, huge.

These gaps range from 24% for those classed as skilled tradesmen and women, to 18% for managers, directors, and senior officials, to 4% for those in sales and customer service occupations. Currently, the gender pay gap for full-time workers stands at 9.4%, while for all occupations it is 19.2%, according to the ONS.

Undoubtedly, the last thing employers affected by the obligation to publish gender pay gap data want is to be named and shamed on a government website. This will bring unwanted media attention and pressure to address their pay gap.

Employers’ organisations are concerned. CBI director general Carolyn Fairbairn says: “League tables should not be used to name and shame firms as data will only be able to present a partial picture, particularly given factors such as the mix of full-time and part-time working and sectoral differences.”

Seamus Nevin, head of employment and skills policy at the Institute of Directors, calls gender pay gap reporting “the blunt instrument of a simplistic league table and naming and shaming”.

Nevin adds: “The problem with reducing these complexities to a single number and publishing league tables is they will scapegoat employers for a gap… they have no control over. It will do little to address the underlying problems.”

However, legally, should employers feel aggrieved at being named and shamed, they will just have to take it on the chin.

Linda Stewart, partner at Simpson Millar, says: “It is difficult to see any legal means by which employers could challenge government proposals to ‘name and shame’ those who fail to comply with the law. For employers who may be anxious to protect their good name, the answer is simple: get your house in order now.”

Nor does Stewart think that employers will be able to do much about any negative publicity that may follow their appearance at the wrong end of any league tables.

“There is unlikely to be any legal remedy open to an employer seeking to restore their reputation. Arguably the solution is already in the hands of employers: increased pay transparency in the workplace coupled with a strategy to close the gender pay gap will do more to protect corporate reputation, public confidence and employee loyalty than anything that can be achieved by legal means.”

Employers concerned that publishing gender pay gap figures will place them in an unfavourable light, should start analysing their figures early rather than waiting until “G-Day”.

Daniel Puckey, senior consultant and pay expert at Wills Towers Watson (WTW), says the first challenge for employers will be “making sure they have the data they need”, as the various elements required for the gender pay gap figures may well not be in one system. “The second challenge is the resource required to run a gender pay gap analysis. Many will not have the resource they need and will need… external support. The third challenge is to ensure the leadership is aware of the legislation and the personal responsibility they have in signing off the gender pay gap report.”

WTW recommends that affected companies do a dummy gender pay gap run this year to discover why the gender pay gap exists and to come to terms with what the real review will entail.

Chris Charman, senior principal at Mercer, says: “Organisations are well-advised to review early and extensively to understand the root cause (of gender pay gaps) beyond pay and into workforce analysis.

“With this insight, they should then be ensuring that their senior leaders understand the issue and the positive business case for change. Whole systems change is likely to be the only way an organisation can make inroads on the aspects of the gender pay gap they can influence. Critically, by starting early, they can be proactive in publishing beyond compliance and tell a positive story that is about the real value they place on the talents of all their workforce to deliver organisational success.”

Puckey adds that employers would be well advised to provide a commentary on their gender pay gap figures that addresses key issues. For example, extenuating circumstances such as the timing of bonus payments and instances where men and women are actually paid more or less the same for doing the same jobs.

Charman says “the focused attention will be helpful in reducing the gap, however the fundamental issues driving the gender pay gap really arise from the issues of occupational segregation.”

“Overall,” says Dianah Worman, CIPD diversity adviser, “the CIPD believes the government regulations are on the right track. However we’re not convinced the proposals to publish pay gap league tables across economic sectors will be helpful in levering systematic change.”

Brenda Trenowden, global chair of the 30% Club, which wants FTSE 100 companies’ executive boards to have 30% female representation by 2020, says: “We know that companies that are making the most progress in tackling the gender pay gap have started with metrics measurement and reporting. This would be a significant step in addressing the imbalance in the talent pipeline.”

Jemima Olchawski, head of policy and insight at the Fawcett Society, says some additional measures “would make this a real game changer, such as requiring organisations to publish an action plan to tackle the gender pay gap”.

The Chartered Management Institute says that the focus for employers “has to be on the talent pipeline. It means measures such as ensuring women have access to management and leadership development, and a focus on maternity return-to-work schemes to stop so many new mums from opting out of the workforce.”

Kathryn Nawroc, gender equality director at Business in the Community, says the gender pay gap “is influenced by the concentration of men in high-paid senior roles, and women being stereotyped into low-paid functions. Changing that status requires a significant shift in employers’ mindsets.”

Finally, Jo Broadbent, counsel at Hogan Lovells, comments: “We are unlikely to see very rapid change, because the causes of the gender pay gap are complex and not susceptible to short-term fixes.”