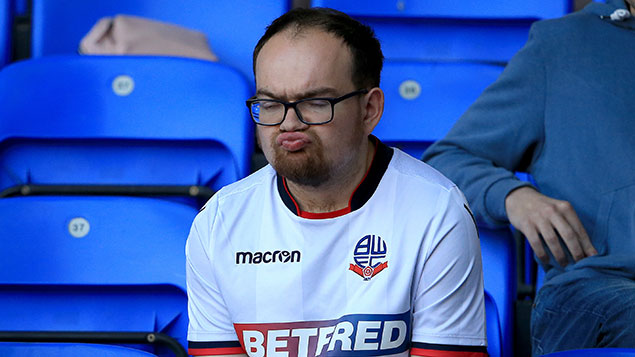 On Saturday Bolton Wanderers became the first club in English football league history to force the postponement of a fixture because of industrial action by players and staff.

The move was fully supported by players’ union, the Professional Footballers’ Association (PFA).

The club has been dogged by financial difficulties going back several years and has survived two winding up orders from HM Revenue & Customs. It is in the midst of a protracted takeover that has still not been ratified by the English Football League.

The players decided not to play Saturday’s fixture with Brentford because they had not been paid for over a month, having also had delays in the payment of salaries earlier in the season.

In a statement they said: “The playing staff have yet to receive our March salaries. Five of our coaching staff are also yet to be paid for March. We have endeavoured to continue our training and playing commitments during this extremely difficult time, with seemingly no resolution in sight.

“We thought that the prospective takeover of the club would provide a solution but difficulties in its completion have left us no further forward. This situation is creating mounting mental, emotional and financial burdens for people through no fault of their own.”

The PFA, which had provided loans to ensure the players were paid in December, stated on Saturday: “The players have shown great patience and loyalty towards the club all season, but today, they have reached a point where action is necessary.”

The club’s current owner and chairman, Ken Anderson, a former footballers’ agent, was last month described as “a rogue chairman, a slippery character” by the Forest Green Rovers chairman, Dale Vince, in a dispute over the unpaid wages of a player taken from Rovers on loan.

However, Anderson puts the blame for the current situation at Bolton firmly on the incoming owner Laurence Bassini, a former chairman of Watford FC. Anderson said at the weekend: “Despite further promises made to both the team manager and senior representatives of the squad no funding has been made available to allow payment to the staff or players.

“Given the broken promise Mr Bassini gave to the players that their wages will be paid by no later than Wednesday, April 24, the squad have informed the club that they will not make themselves available for selection for today’s [Saturday’s, 27 April] game against Brentford. Given this decision the club had no alternative other than to postpone the fixture.

This article was altered on May 24 to reflect the fact that Ken Anderson was never chairman of Reading FC.

“I have decided to give Mr Bassini until close of play on Monday to complete the outstanding matters, or l will have to consider exercising the alternative options available to me. The ball is now firmly in Mr Bassini’s court.”

The EFL said it would charge the club, which has already been relegated to Division One with one two games left to play, with misconduct, adding: “The current ownership difficulties at the club remain a significant concern for the EFL and we will look to work with both parties over the next week to bring all outstanding matters to a speedy conclusion.” It has ordered Bolton to fulfil the two remaining fixtures at the earliest opportunity with under-18 players if necessary.

Previous threats of strike action at British clubs have taken place at Plymouth Argyle FC in 2011 and in 1961 during a dispute over the maximum wage rules then applied to footballers. In both instances strikes were called off a few days before the fixtures targeted.

The takeover deal led by Laurence Bassini was reported to have collapsed on 2 May. A club statement read: “Following the request from Mr Bassini to allow him a further 48 hours to complete his funding package and present this to the EFL, we can now confirm that no subsequent meeting took place and nothing further has been presented for the board of the EFL to consider.”

The EFL announced on 3 May that the postponed match against Brentford would not be replayed and the three points, and a 1-0 win awarded to the west London side.