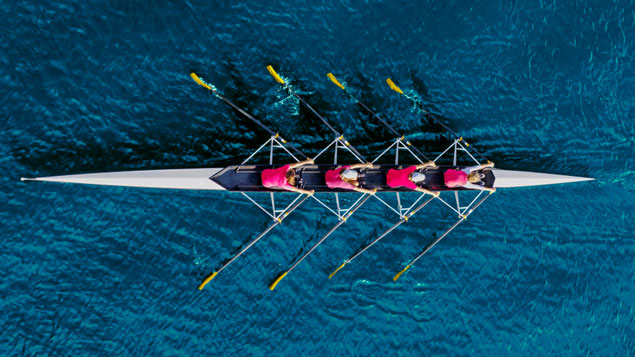 In a volatile environment, organisations need teams that are engaged, productive and know what they’re working towards. How can we inspire team leaders to get the best out of their people?

Few people at work are not part of a team. Organisations need to be agile and innovative when faced with ever more complex business and societal challenges, and increasingly realise that good team leadership can help them to achieve their goals.

The impact of bad team leadership can be severe. In healthcare, research reveals that poor team working is significantly associated with increased clinical errors and patient mortality.

Furthermore, teams need to be authentic to succeed. A study in the NHS found that while 96% of staff reported they worked in teams, only 53% said they worked in “authentic”, well-structured teams.

But what makes an authentic team? We would argue that the three criteria for the latter are:

Organisations are also increasingly looking to bring together multi-disciplinary teams, the assumption being that the variety of knowledge, expertise, information and access to networks contributes to team performance.

However, this can have its downsides, too. The presence of expertise and professional diversity may also lead to the formation of subgroups and cliques within teams, which is likely to affect levels of engagement in the team, and, ultimately, reduce team effectiveness.

Indeed, the relationship between diversity in teams and team performance is not clear-cut. Differences between team members (for example, in gender, cultural background, professional values, length of time in team membership, and the like) can have a dysfunctional effect on effective team working.

Research by software company Sage last year found that many organisations now have five generations working alongside each other. Such differences might lead to what some researchers refer to as “faultlines” appearing in teams. The challenge is, how can you maximise the positive benefits of diversity and reduce the potential negative effects?

Organisational psychologists have identified a range of key principles to increase the engagement and wellbeing of team members, the effective functioning of teams, and their chances of success.

They argue that there are three dimensions of teamwork that constantly interact. Team leaders need to maximise all three if they are to achieve sustained high performance:

So how do these principles work in practice?

Principle 1: ‘Identify what unites us’

A powerful way of increasing a sense of collective identity is to actively engage all members in building a shared vision. Most people have a vision of what they want to achieve in their daily work and of the sort of team in which they would like to work, even if this is rather vague.

After all, when individuals complain about work, they are often just stating that this is not how they envisioned spending their working hours.

Leaders need to find ways of encouraging team members to co-create this vision. This may also include exploring their frustrations, tensions, and anxieties, but should also lead to suggestions as to what can be changed to make team working more satisfying and fulfilling.

Ignoring such emotions may increase stress – which is highly infectious in teams – and will inevitably reduce the potential that resides within the team, including the ability to cope with increased demands.

Spending time on building a shared vision also has the benefit of increasing resilience in teams, so they can better cope with setbacks and emerge stronger, which is critical in a fast-changing world.

Principle 2: Work together on how to achieve the shared vision

A major driver of engagement is a strong sense of meaning and purpose in what we do at work. Humans need to be authors of their own future, so enabling employees to identify their particular role automatically sets them on a path to achieve this shared vision.

By providing opportunities for members to contribute their ideas, suggestions and expertise, team leads engender a sense of respect, empowerment, of being valued, and their individual importance.

Inviting team members to discuss how best they work together in achieving team goals can strengthen a sense of interdependency, collaboration and mutual respect.

By strengthening the above processes, team leaders can produce a strong sense of team potency – the belief and confidence that the team can cope with challenges and setbacks – which is critical in an environment of constant change.

Research has found that this significantly predicts engagement and wellbeing results. Team members are willing to work harder and more innovatively to enable their team to succeed, and this sense of potency can really influence how productive they are.

Principle 4: Be clear on roles and responsibilities

Duplication of effort and confusion as to someone’s roles and responsibilities can increase frustration and stress, and potentially create conflict in teams. In a study of multi-disciplinary teams, it was found that being clear about people’s roles had a positive impact on the quality of team outcomes, team improvement in performance and wellbeing.

Principle 5: Create a culture of learning and psychological safety

To deal with the increasing demands and complexity of challenges facing teams, a degree of adaptation, experimentation, and probably innovation is required, which inevitably means the frequency of mistakes will increase.

But mistakes are like “cognitive catalysts”; they challenge our assumptions and stimulate the generation of new and better ideas.

A leading US researcher was puzzled to find a significant positive correlation between well-led teams and the number of mistakes they made.

On further exploration, she and her co-researcher found that this was likely because the well-led teams were more likely to report their errors, and because there was a culture of openness, support, and of learning from mistakes.

Our UK study of engaging leadership and effective multi-disciplinary teams corroborated these findings, and echoed that a sense of collective experience and supporting a developmental culture could lead to improvements in team performance.

What should team leaders do now?

New notions of leadership have transformed our understanding of the nature of the relationship between leaders and their direct reports, from one in which the leader is regarded as the fount of expertise for their team, to one of creating an environment for leadership to emerge.

Evidence of this relationship was obtained in our three-year investigation. We discovered that team leadership did not directly predict team outcomes, but the impact of the leader on the culture within the team did.

For those who believe undertaking the above is too great a time investment, we offer that oft-quoted maxim: “If you think education is expensive, you should try ignorance.”