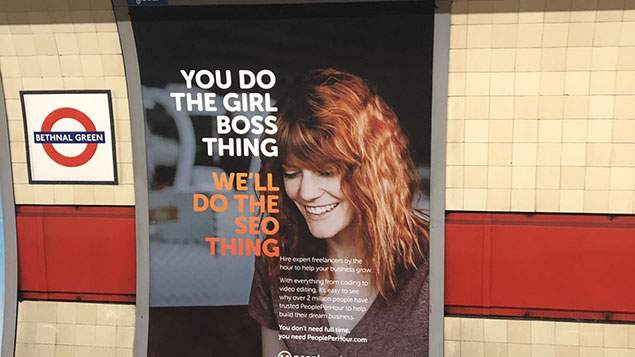 Gig economy company PeoplePerHour has had an advert banned by the Advertising Standards Authority because it promoted “harmful gender stereotypes”.

The company’s advert, which said “You do the girl boss thing. We’ll do the SEO thing” received 19 complaints claiming that it patronised women in business.

PeoplePerHour, which links freelance workers with businesses, issued an apology when the complaints began to emerge, which was posted online.

The company said: “While we agree that the messaging has clearly missed the mark, we would like to clarify that this advert was never intended to be patronising or belittling to women.”

It added that the term ‘Girl Boss’ was coined by Sophia Amorusu, founder of clothing company Nasty Gal and a successful female entrepreneur. “Girl Boss is a well-known buzzword and the intention of using this term was to empower women, not condescend,” it said.

PeoplePerHour said that its mission was to “champion and celebrate the skills of everyone and help business owners to get things done”.

The company added: “We know that women can be both SEO experts and business owners. The idea behind the ad is that busy business owners can hire freelancers to help with tasks they may not have time for. We definitely do not believe or want to imply that women are incapable of doing more than one thing.”

When the campaign was launched last year, it received a barrage of criticism on social media, with many Twitter users calling it “patronising”.

In its judgement, the ASA said: “They acknowledged that the execution might unintentionally come across as sexist and demeaning to women. They had taken steps to rectify that by removing the word ‘girl’ from the ad and issuing a public apology on their website. [Ad agency] Global said that at the point of review, their ad copy team did not feel that the ad was likely to cause offence.

“Having received the complaint, they carried out training with the team to ensure they considered wording, such as that in the ad, which could be misinterpreted or cause offence. They had informed their client that they would not run this particular ad going forward.”

PeoplePerHour said it would now focus on ensuring its brand values were not misconstrued in any future campaigns. The ASA has ruled that the ad can no longer appear in the format that sparked the complaints.