Research suggests we’re becoming increasingly confused about where we should be working this winter as employers and employees do battle over whose heating to use, but as Adam McCulloch finds, actual hot desks may yet save the day .

The cost of living crisis. Power cuts. Energy bills. Strikes. Rain. Matt Hancock Down Under… Should all these contemporary blights mean “knowledge workers” should work from home and pause their hybrid routines this winter?

The answer could depend on who needs the most protection from energy costs – employers or employees? Personnel Today has heard predictions that thermostat terror will lead to thousands of knowledge workers traipsing to their offices; but new research suggests that, no, this won’t happen: instead, businesses will turn off the heating, lock the doors and tell us all to shiver in our residences. (I apologise for the term “knowledge worker”, dear reader. I know it may imply that people who don’t work in offices don’t know as much about stuff as those who do, but it’s better that writing “office” all the time.)

A lighthearted take on HR

Flush away your hybrid work troubles

Quiet quitting? What a lot of nonsense!

How Myers-Briggs personality types can save the office

The conflicting forecasts about where we are to work, bring to mind comedian Matt Lucas’s brilliant Boris Johnson parody from the early days of Covid.

Now, research claims that UK bosses are considering asking workers to stay at home to save on office energy bills this winter. A survey of 1,000 senior leaders at UK companies finds 64% of senior leaders are considering reversing their rhetoric around encouraging employees back into the office. And three-quarters of business owners (74%) feel the same way, as their companies’ bills mount. According to the research from freelance platform Fiverr, this could spark a backlash among UK employees, with the average worker predicting they could save £38 a month on home energy bills by coming into the office over winter.

Productivity and in-person connection at the office is at loggerheads with UK businesses’ urgent need to cut energy costs” – Bukki Adedapo, Fiverr

At Personnel Today we’ve seen so much research involving senior leaders that we are beginning to wonder whether bosses should spend a little less time answering surveys. But then again, as Albert Einstein said: “If we knew what we were doing it would not be called ‘research’, would it?”

Bukki Adedapo, head of UK for Fiverr, said employers and employees’ needs were diverging once again: “We have now reached a point where productivity and in-person connection at the office is at loggerheads with UK businesses’ urgent need to cut energy costs during the winter period.” We think that means bosses want us to stay put. He added that nearly half of the companies surveyed said it was likely their remote work policies would change again in 2023. “For workers, this instability may be a cause for concern,” he said.

Hot-desking. As in temperature

Yes, but Adedapo clearly hasn’t heard about a wonderful technical innovation that may yet save the day for the hybrid knowledge worker. Hot-desking is here. You may roll your eyes, thinking that you know all about hot-desking having been doing it for years. But hang on – this time the desks actually are hot. 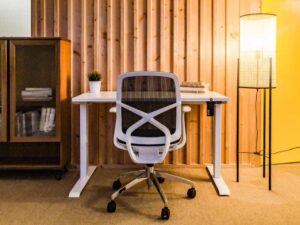 Staples office furniture suppliers are now selling heated desks from British manufacturer Ökoform and claims that sales are up 60% in recent weeks.

These innovative desks (pictured, left) apparently heat up knowledge workers on an individual basis rather than the whole room. Dorset-based Ökoform claims that having one of its desks – which use an electric radiant heating element rather than the surrounding air – is 90% cheaper than having a fan heater in the room, let alone having the heating on.

The company’s founder Peter Waine was on Dragon’s Den earlier in the year. Although he didn’t win any investment from the Dragons, he since then won the Green Hero Award from Channel 4’s Grand Designs.

So go to the office or stay at home? Well at about £400 each, it could well depend on who’s buying the desk. But as a piece of tech kit it would certainly beat the office cardigan.

Working from home may have career benefits for...

Flush away your troubles with hybrid work

Stop banging on about working from home: Neil...

Half of bosses agree with home worker monitoring

Power cuts: what are the HR issues?

Can we monitor remote workers?