A new workspace in south London is aiming to raise the bar for office space that’s attractive to small creative companies hoping to collaborate and network with like-minded firms. Behind it is one of the area’s most forward-looking employers: the Ministry of Sound Group, writes Peter Crush.

By rights, the chairman and (until 2016) former CEO of Ministry Of Sound, Lohan Presencer, should be a bag of nerves. It’s just a few hours to go before the launch party of a £10m venture, and there are still pictures to put up and fixtures to install.

But he’s carefree. “Doesn’t this place just want to make you chilled and want to stay?” he says, sinking back into a bespoke crushed blue velvet sofa. “It’s totally relaxing here, just lovely.”

Instead of sitting in a brand new nightclub though, the type of venue the brand has been synonymous with since first appearing on the London scene 26 years ago, Presencer is enjoying the calming surrounds of somewhere very different: The Ministry, a six-floor 50,000 sq ft building near Elephant & Castle (formerly the Letts Diary factory) in the fast-gentrifying Southwark area of London. It’s the latest addition to the burgeoning co-workspace market and has just opened.

That’s right. The enfant terrible of the 90s rave scene, the man that made a generation of people late for work, now wants to keep them there. He is, to all intents and purposes, an office space provider. 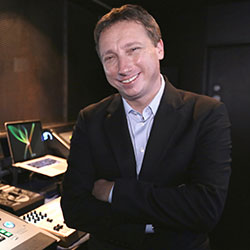 “It’s entirely logical,” he says. “A few years ago, we were looking at a different building, with a view to seeing what we should do with it. At the time, people used to be impressed by our own head office – open plan, music, good fittings, and it was then that we seriously started looking at the shared workspaces concept. We could already see it was growing, but what we saw was terrible; bland buildings, with bland mottos on the walls – it was horrible. We felt employees deserved something better.” To this end, The Ministry incorporates gyms, a bar, a restaurant and events as part of its offering.

Presencer was undoubtedly on to something. Last year, workplace providers took a fifth of all office space – triple the amount they did the year before, and in launching The Ministry, he’s seriously upped the ante. A lot of money has been spent. There are eight “sound zones”, each with its own distinctive background rhythm, specifically designed to relax, inspire, motivate or energise; there is a garden, all the furniture is bespoke from Italy, and the centrepiece is an 70ft-long bar. Interior design is by Squire and Partners with plenty of original brickwork, stripped flooring and industrial-looking doors and fittings on show.

We’re not a private members’ club, or a hotel doing a bit of workspace; we’re not a workplace provider as such; and we’re not a wholly social space. What we are is a place that creates a community”

To an extent, Presencer – who first joined Ministry of Sound in the 1990s to market its compilation albums division – has created his own niche. “We’re not a private members’ club, or a hotel doing a bit of workspace; we’re not a workplace provider as such; and we’re not a wholly social space,” he says. “What we are is a place that creates a community. Other providers claim they are but they’re not. We are an entrepreneurial and creative business, and what we’ve done is design a place where other entrepreneurial and creative businesses can base themselves.” 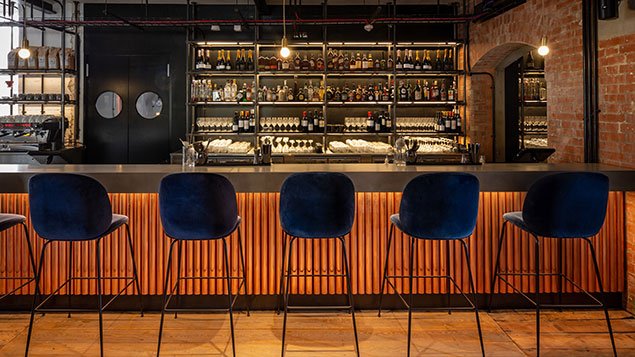 A key part of the model is being selective about who actually moves in – and The Ministry is solely for creative businesses. The idea is that staff from one firm will most likely rub shoulders with another – what Presencer calls creating “accidental serendipity” – so that there’s sharing of ideas. To ensure mingling really does happen, 30% of the building is community-led (with bar and lounges), and even the lunch menu (with products direct from the nearby Borough Market), has been designed so that it takes the perfect time to make – long enough so people can chat, but not so long they might be tempted to go somewhere else.

Ensuring there’s the right level of comfort isn’t just an exercise in superficiality. It’s been carefully calculated. Presencer believes the expensive decor is money well spent: “Creative people notice the finish,” he says. “It has to be the best. We want people to stay in the building, because we believe doing so will make them more successful.

“This only comes from enabling them to mix with others socially, and by creating a mood for playful, productive working.”

Of course, behind the wall art, cinema rooms, nice furniture, there are still rooms with workstations (the cost is per desk, per month – £575 for an open-plan desk and £750 for an enclosed office desk). It costs more than rivals charge, but Presencer says he’s helping businesses be more efficient. “We’re premium, but look at it this way. Too many companies pay to have space – like meeting rooms – that might only be in use 10% of the time. The clear direction of travel is having access to meeting rooms, shared by others.”

He contrasts this idealised work environment with the living accommodation on offer in London for younger people: “What HR folk have to remember, is that most of their younger staff live in low quality, expensive, rented housing, a long way out of town. Give them a place like this to hang out in and work, and it’s a world away from where they live. Firms keep telling me retention is their biggest problem. Retaining talent is easy when staff want to be somewhere that makes them feel great, and feel wanted.” 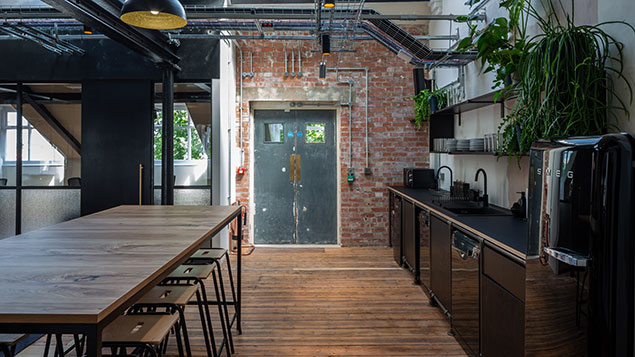 Firms keep telling me retention is their biggest problem. Retaining talent is easy when staff want to be somewhere that makes them feel great, and feel wanted”

It’s far too early to say whether or not the venture has been a roaring success, but already Presencer has good news – 50% has been pre-let, and he expects the whole place to be full by Christmas. “We’re getting 20-30 enquiries a week, and turning away as many businesses as we accept,” he says. “Bosses are buying into the fact they want their talent to be in an environment where they can be the best that they can.”

Already, he says, he’s got plans to open similar new spaces, with each one focusing on its own sector, creating a network of shared communities.

The question as to how the competition may respond is not one that’s taking up too much of Presencer’s time. “I don’t care,” he says. “They can’t match the quality we offer. We’re about creating an experience and community. We don’t pretend to have all the answers, and we’re still learning, but as an entertainment brand, we believe we know how to make an environment suited to a purpose.”

Peter Crush is an award-winning HR journalist who writes for daily newspapers including The Guardian and the Evening Standard, as well as HR and business journals.