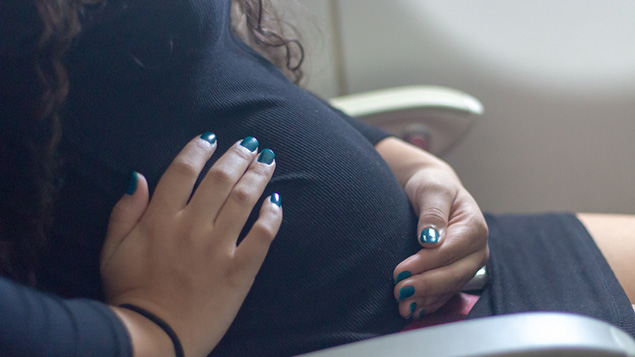 A woman has been awarded almost £28,000 after a tribunal found she had been unfairly dismissed at 20 weeks pregnant.

Laura Gruzdaite worked for plant wholesaler McGrane Nurseries in Tandragee, Northern Ireland. She had told her managers she needed to attend an antenatal scan but was accused of skipping work and told she would be needing “more days off”. She was dismissed two days after the appointment.

The industrial tribunal, which heard her case in July, came to a unanimous decision that she had been dismissed for reasons connected to her pregnancy.

What is direct pregnancy and maternity discrimination?

While she was at her antenatal appointment, the tribunal heard that McGrane Nurseries held a meeting with a group of seasonal workers who were subsequently given a week’s notice. It was at her meeting two days later that she and her husband – who are both Lithuanian – were told they would also lose their jobs.

The company claimed that Gruzdaite and her husband were dismissed because the season had come to an end, but the tribunal argued that “the reason was tainted by discrimination” because they had dismissed her due to her antenatal appointment.

The judgment said: “From an assessment of all the evidence we find that a decision was made to terminate the claimant’s contract by choosing her to leave earlier than the others because she had been on antenatal appointments and would be going on more appointments.”

The Gruzdaites said they had come to Northern Ireland for a permanent job, had not been told the role at the nurseries was seasonal, and had been given a blank contract to sign with no start or end dates. The tribunal also heard how her manager, Peter McGrane, became “less friendly towards her” once she had announced her pregnancy.

She was awarded £20,000 for injury to feelings and £820 for loss of statutory maternity pay, as well as further sums for loss of earnings and future loss of income.

He said: “In spite of the legislation being in place for more than 40 years, some employers still seem to be unaware of the law and the consequences of breaching it.”

The company is now working with an HR consultancy and the Equality Commission to implement “a series of policies and practices to ensure we meet the highest standards in relation to the issues highlighted in the judgment of this case”.

One Response to Pregnant woman wins £28,000 after unfair dismissal at 20 weeks