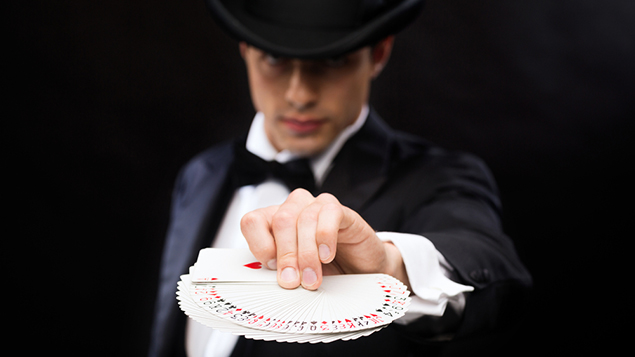 Magicians are often used in corporate entertainment, but does magic have a role in team building? Neuroscientists even claim magic tricks throw light on sales techniques or business negotiations. Dr Nicola Davies looks at how magic can enhance teamwork, patience, focus, risk-taking, and problem-solving.

Within Cuthbertson’s repertoire are team building games, workshops, and conference and awards night performances. He not only presents his own magic, but he also teaches employees how to do tricks.

When a magician comes in to a workplace and gets people involved in solving or performing magic tricks, they can teach skills including team work and good communication. It can also facilitate the development of creative approaches to problem-solving, and how to work within a limited time-frame. These skills are important in creating adaptable teams.

The power of the performer

Introducing magic into the workplace is not always easy, however. People can feel embarrassed when asked to “let their hair down” in front of colleagues whom they might otherwise be very professional around. Encouraging people to participate without being embarrassed requires a special knack. Cuthbertson says the good magician inspires confidence in his abilities through being able to “talk to and not at his audience.”

He makes his audience feel special by bringing them in on the act, something which he accomplishes through charisma. “Eye contact is really important, and so is smiling,” he says. A genuine smile lifts the mood, relaxes people, and gets them in the mood for fun – and learning.

The fun and learning often comes from trying to work out how the magician “does it”’ something which can greatly develop focus and problem-solving skills as full concentration is required in order to try and expose a trick.

During team building games, groups learning a magic trick take responsibility in different ways during a workshop performance. From this, HR managers can identify individual employee’s skills, which can later be harnessed in the workplace. These performances can provide management with insights on personality traits, problem-solving skills and team interaction.

Employees who thrive at performing magic are often the “distractors” in the workplace and might sometimes be seen as not pulling their weight. But the attributes of such employees can be harnessed in a positive manner, such as in customer care, for example.

Neuroscience provides insight into how magic might be useful within the workplace. Magicians have long used observation of human behaviour in order to pull off their tricks. In recent years, however, neuroscientists have been working with magicians to better understand the human perception of reality.

Magicians create visual illusions because they know that the brain’s neural circuits can process visual information through sometimes amplifying, suppressing, converging, or diverging visual information. This is why someone can walk across the stage in plain sight but no one will notice.

So, when the magician throws the ball in the air twice, then on the third throw it disappears into thin air, this is because he palmed the ball but used the visual clue of looking up on the third throw. Our neural circuits predict what is likely to happen and we “see” the ball thrown in the air for the third time because that is what we expected to see. By learning how these tricks work, teams can relate them to problems at work. They learn how not to “track the ball” and become distracted. Magic also teaches employees to expect the unexpected and to think outside the box.

Magicians capitalise on the fact that our brains cannot absorb everything and our brain filters out what is considered unnecessary, in order to create a reality based on what things are supposed to be like. This implies that multi-tasking might not always be the best approach when at work.

In advertising or sales, the neuroscience of magic might be even more useful. Sleights of Mind is a bestselling book by two neuroscientists, Dr Stephen Macknik and Dr Susana Martinez-Conde, who spent years assessing how behaviour can be affected by the principles of magic. Through understanding the brain games of magicians it becomes possible to comprehend the cognitive manipulations used in advertising and business negotiations.

Company executives can gain many tips regarding image and communication from a magic show – not least the way the performer presents themselves. Cuthbertson says: “Be a nice guy in the eyes of the audience. If they like you from the start, they will enjoy whatever you do.”

For companies, communication is key and setting the right tone to suit the company is vital – these are skills which can be practised by groups during the presentation of their magic tricks.