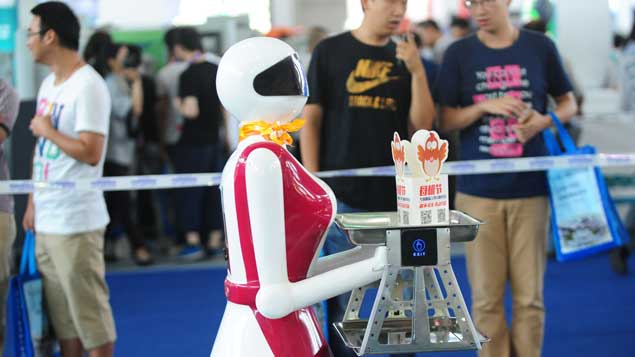 Robots will be able to take on mundane tasks, experts argue/Imaginechina/REXShutterstock

As research predict that as many as one-third of roles could be taken over by technology, how does this change the shape of the workforce, and HR’s role in managing it? Cath Everett reports.

As soon as you mention artificial intelligence, most people immediately think of out-of-control computers such as HAL in the movie 2001: A Space Odyssey or The Matrix, in which sentient machines simulate reality in order to subdue the human race.

While more benign creations such as the robot in Robot & Frank have turned up in other films to balance things up a bit, the portrayal is generally one of a dystopian future in which people are struggling against the rise of machines that, in one way or another, are attempting to either dominate or replace them.

Such ideas, it appears, are deeply entrenched. So when Deloitte and Oxford University came up with a recent study claiming that within two decades, 35% of the work that UK employees currently perform would be replaced by machines, it sent frissons of fear down many people’s spines.

A recent documentary from the BBC, Could a robot do your job?, also sparked debate.

But just how likely is such a scenario to take place and if it does, will HR professionals find themselves part of the cull too? The views of experts are somewhat mixed.

John MacIntyre, Professor of Adaptive Technology and Dean of the Faculty of Applied Sciences at the University of Sunderland, is adamant that there is “zero chance that humans will be replaced by machines”.

The pace of technological change is so rapid now that we’ll see a much greater increase in the speed at which employment change occurs.” Lee Beardmore – Capgemini

Firstly, he points out, AI-based systems are great for specific tasks such as recognising patterns in data. But, unlike humans, they are unable to intelligently interpret that data, combine it with other information and make decisions on that basis.

However, this may still be some way off, he adds: “That is a degree of complexity beyond the current state of AI. We won’t get there in two decades, although we might in two centuries.”

Instead, AI is actually an umbrella term for a number of different techniques and approaches. These include machine learning, which focuses on statistical analysis, and natural language processing, which involves computers inferring context from structured texts.

The technology itself, meanwhile, is today mainly found in embedded software, which includes the automatic focus facility on cameras and controllers in washing machines. It is also included in applications that help individuals to make decisions.

“A lot of what AI does is about providing a mechanism to augment decision-making, rather than threaten and replace what humans do,” MacIntyre explains. “It’ll take a lot of the grunt work out of anything where there are repeating patterns, but the work that humans do will always be necessary – although it’s likely to change over time.”

Unlike some commentators though, he does not believe that AI will spark off a second Industrial Revolution, creating huge upheaval in employment and society as a whole.

“The internet has already brought about some form of revolution and AI will simply enhance that rather than create a new revolution per se,” MacIntyre attests.

But Lee Beardmore, chief technology officer of Capgemini’s business process outsourcing division, is not so sure.

He believes that in the same way computer automation has done away with lots of blue collar jobs over recent decades, AI and robotic process automation will have a similar impact on white-collar roles in areas ranging from HR to finance.

This means that any office worker performing mundane, “mechanistic admin activities” is likely to find their job replaced by a computer, he claims.

“If a six or seven year old could do it, it’s probably something that you could train a computer to do,” says Beardmore. “Anything in excess of that is probably stretching it, but it’ll happen in the next five to 10 years.”

As an example, he cites AI-based machines being used to sift through CVs based on parameters pre-defined by recruitment personnel in order to boost productivity, save time and reduce errors.

Karl Chapman, chief executive of legal firm Riverview Law, which signed a knowledge transfer partnership with the University of Liverpool earlier this year, also foresees a day when such technology will be used to automate similarly labour-intensive tasks in his sector.

For example, if a large global corporate customer decided to review hundreds of thousands of contracts, “technology today allows you to do some of it through automation and linguistic capture”, he says.

“It will go from lots of people reviewing contracts to no people and we, as senior lawyers, will simply review the outputs. It takes out a lot of the grind,” Chapman says.

“So you’ll still have paralegals, but there will be fewer of them, they’ll start at a higher level and will do different jobs.”

Another possible application of AI takes the form of virtual agents such as Amelia, which was created by IPSoft with the aim of optimising organisations’ business and IT processes.

Amelia is an avatar that employs natural language processing techniques to communicate with people. By using specially developed intelligence algorithms, she is also able to analyse intent and even sense emotions to help answer queries and solve problems.

This means that, in a call-centre environment for example, by absorbing a mixture of instruction manuals and guidelines, she can be trained to answer customer emails and answer calls.

So, if Amelia understands the query, she will be able to take all of the necessary steps to solve the problem. If she doesn’t know the answer, she will scan the web or corporate intranet for help.

Only if she is unable to find the right information will she ask a human for assistance, before observing the response and learning from it for next time.

Amelia was first revealed in autumn 2014, and is currently being trialled at a handful of corporates such as Shell Oil, Accenture and NTT Group.

Applications include supporting financial operations, looking after technology helpdesks and advising remote workers in the field.

“The work that humans do will always be necessary – although it’s likely to change over time.” – John MacIntyre, University of Sunderland

Martijn Gribnau, IPSoft’s chief change officer says: “She’s remarkable, but she’s only as good as you teach her to be and as good as the body of knowledge that you give her.

“She’s the next step in a form of digitisation that’s been going on since the 1980s – the digitisation of interaction.”

But as these kinds of innovations grow in number and scope, Capgemini’s Beardmore believes they will have a dramatic impact on the workforce, resulting in staff having to be trained and up-skilled to work in higher value areas.

If this is not possible, the inevitable consequence is that they will lose their jobs.

As a result, while AI systems won’t replace people entirely, they could supplant particular roles and tasks that are common today.

But previously unthought-of jobs will also inevitably emerge to counterbalance the situation, at least in fields that require relatively high levels of skill anyway.

This means it is likely to be the lower-skilled who suffer most during the transition.

“It’ll be a similar situation to the Industrial Revolution, but the pace of technological change is so rapid now that we’ll see a much greater increase in the speed at which employment change occurs,” Beardmore says. “The only limiting factor as far as I can see is the speed that companies can adapt.”

This, of course, is where HR comes in. Although many mundane tasks here will likewise be automated out of existence, the function will continue to play a strategic role in understanding and dealing with the implications of ongoing technological change in key areas such as skills, learning and development, resource planning and reward.

As MacIntyre concludes: “AI will most likely be deployed in the HR field to analyse large bodies of data to provide people with additional information and knowledge.

“But don’t forget that the H in HR stands for ‘human’. It’s about dealing with the vagaries of people, and AI systems will never be able to do that.”