Responding to an employment tribunal claim: five tips for employers 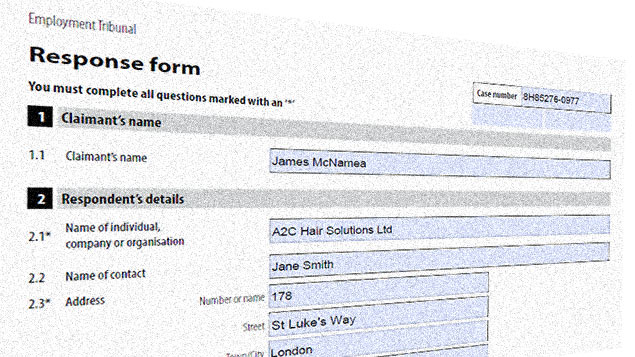 Practical guidance on responding to an employment tribunal claim

1. Deal with the claim promptly

A tribunal claim is not something to be put to one side to deal with later. There should be procedures in place within an organisation to make sure that, when an ET1 (the tribunal claim form) is received, it is immediately brought to the attention of the relevant people.

The employer should decide who will have main responsibility for dealing with the claim and putting together a response, for example someone in HR or a senior manager.

The employer’s response to the claim must arrive at the tribunal office, on the prescribed form (the ET3), within 28 days of the date on which it was sent out.

Whoever is responsible for the response should ensure that the deadline, and a timetable for responding in time, is diarised. If the employer intends to seek legal advice, it should do so as soon as possible after receiving the claim.

2. Assess the merits of the claim

Claimants cannot submit a tribunal claim without first having contacted the Acas early conciliation service. However, it is not compulsory for the parties to agree to take part in conciliation.

If the parties have gone through the conciliation process, the employer may already have received details of the claimant’s case and had a chance to assess its merits.

In any event, the employer should carry out a careful assessment of the strengths and weaknesses of the claimant’s case and of its own defence, and decide whether or not it is worth fighting the claim.

Even if the employer thinks that it is in the right, settlement may be the more economic option, taking into account the cost and time involved in defending a claim.

3. Focus on the relevant issues

When responding to an employment tribunal claim, the employer should focus on the claimant’s specific allegations, and on the legal issues involved. It should respond to the claimant’s case in detail as it may not be possible to introduce further information at a later stage.

It is important that there are no inconsistencies between the ET3 (the form on which the employer submits its response) and any evidence that it, or the claimant, will rely on.

Whoever drafts the ET3 must pay attention to details and ensure that all factual statements (such as who said what and when) are correct and supported by the evidence.

The rules on time limits at the employment tribunal are strictly applied. There are a number of options for how to submit the ET3, including using the online submission tool or completing and returning a paper form.

The important thing is to remember that the form must be received at the tribunal office within the deadline, not just sent, so employers should try not to leave it until the last minute. An employer can apply for an extension to the 28-day deadline, but this is granted only at the judge’s discretion.