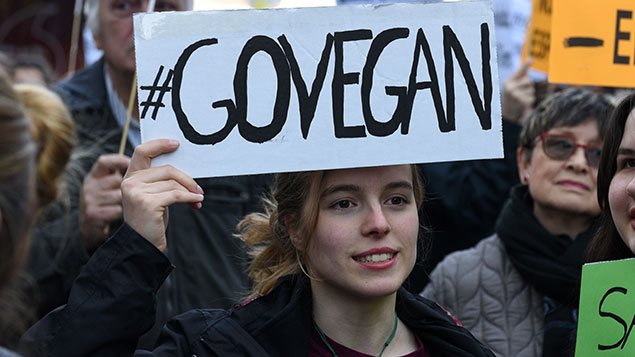 An employment tribunal has ruled that ethical veganism should be protected under discrimination law, a ruling that may have major implications for organisations.

This morning (3 January), Norwich employment court agreed with Jordi Casamitjana, who was formerly employed by the League Against Cruel Sports, that ethical veganism is a philosophical belief and should be protected under the Equality Act 2010.

Tribunal to decide whether ethical veganism is a ‘philosophical belief’

Judge Robin Postle, in a short summary judgment, ruled that London resident Casamitjana, 55, adhered to the belief. For a belief to be protected under the Act, it must meet several tests including being worthy of respect in a democratic society, being compatible with human dignity and not conflicting with the rights of others.

Casamitjana’s employment claim against his former employer will be heard next month.

Peter Daly, the employment lawyer from Slater and Gordon representing Casamitjana, said: “I’m pleased with how the hearing today has gone and we look forward to receiving the full judgment in due course. This was the first of a two-part employment tribunal. Now the question of ethical veganism has been determined by the judge, the litigation will move on to determine the lawfulness of Jordi’s treatment by the League Against Cruel Sports.

“The recognition of ethical veganism as a protected characteristic under the Equality Act 2010 will have potentially significant effects on employment and the workplace, education, transport and the provision of goods and services.

“The legal team including my colleagues at Slater and Gordon and Jordi’s counsel, Chris Milsom at Cloisters, are very pleased with the result.”

Casamitjana said: “I’m extremely happy with the outcome of this hearing and for the words of the judge who clearly understood what ethical veganism is. I didn’t expect to have a judgment today but the overwhelming weight of the evidence we have provided seems to have been sufficient for the judge to conclude that I’m the ethical vegan I say I am, and that ethical veganism is a protected ‘non-religious philosophical belief’.

Although a first instance decision that could still be appealed, this long-awaited ruling provides useful commentary on the level of legal protection that ethical veganism should receive in the workplace.

In light of this ruling, employers may want to consider reviewing how they support ethical vegans in their company, and if any changes are required. It should be remembered that no employee should feel mistreated at work.

As vegans abstain from the consumption of animal products employers should pay close attention to the food on offer in any staff canteen or pre-arranged business lunches, ensuring there are always vegan options available.

“Better protection means more vegans will be able to be open about their beliefs. This can only be a good thing for the billions of animals still exploited by humans, an environment under duress and stressed public health.”

The zoologist said prior to the hearing that he had been sacked as head of policy and research because he had raised concerns that its pension fund invested in companies that tested on animals. As a result of his disclosures, he claimed he was unfairly disciplined and that the decision to dismiss him was reached because of his belief in ethical veganism.

The animal rights campaign group, which claims to be one of the most vegan-friendly employers, said Casamitjana was dismissed for gross misconduct.

Rhys Wyborn, employment partner at law firm, Shakespeare Martineau, who acted for the League Against Cruel Sports, said: “Although an interesting point of law, this hearing was preparation for the real crux of the matter: why Jordi Casamitjana was dismissed. In view of its animal welfare value, the League did not contest the issue of whether ethical veganism itself should be a protected belief, with the League maintaining that it’s irrelevant to the core reason for the dismissal.

“The League is now looking ahead to the substantive hearing in this case and to addressing the reason for Mr. Casamitjana’s dismissal, which it maintains was due to his misconduct and not the belief he holds.

“It may be the first decision of its kind, but being a first instance decision, it is not enough to have a binding effect on other tribunals and each case will depend on its own facts moving forwards. Nevertheless, it could act as an initial gateway for more action of this type and one wonders what will be next in seeking protection as an asserted belief.”

Casamitjana added, after today’s ruling: “I am not alone. Many people have supported me because they, or their friends, have experienced discrimination for being ethical vegans. Hopefully, from my dismissal, something positive will come by ensuring other ethical vegans are better protected in the future. I really want to thank those who have supported me so far through crowdjustice.com and I hope others may join them as I haven’t achieved my final target yet.”