Tribunal to decide whether ethical veganism is a ‘philosophical belief’ 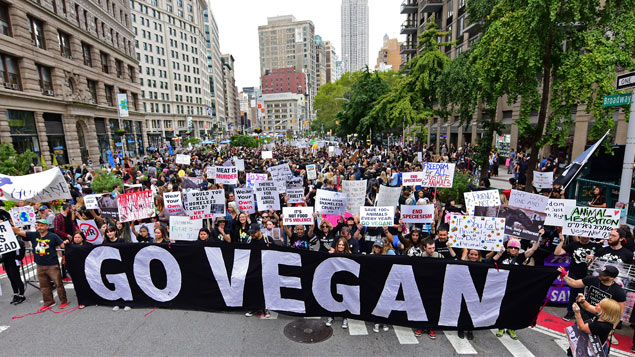 Animal rights activists take part in a march in Manhattan in 2017. Shutterstock

A hearing has begun at an employment tribunal that will decide whether ethical veganism should be protected under discrimination law – the result of which could have major ramifications for organisations.

Jordi Casamitjana, a vegan activist and animal rights campaigner, will argue that his former employer’s decision to dismiss him amounted to discrimination. He claimed that he lost his job, at animal welfare charity the League Against Cruel Sports, after he informed other employees that its pension fund invested in firms involved in animal testing.

At a hearing at the Norwich Employment Tribunal on 2 and 3 January, he will argue that ethical veganism is a philosophical belief and should be protected under the Equality Act 2010. A subsequent hearing in February will consider his employment dispute.

Casamitjana said: “I am an ethical vegan. This involves much more than just not eating food with animal ingredients, it’s a philosophy and a belief system which encompasses most aspects of my life.”

Casamitjana adheres to a 100% vegan diet, participates in animal protection marches and demonstrations and buys only clothes and products he can be sure are free from animal-derived products or tested on animals.

Slater and Gordon employment lawyer Peter Daly, who is representing Casamitjana, said: “Ethical veganism is a philosophical belief held by a significant and growing portion of the population in the UK and around the world. This case, if successful, will establish that the belief entitles ethical vegans protection from discrimination. The case we have prepared sets out how the belief in principle, and how Jordi’s particular interpretations of it, comprehensively meet the required legal test.”

A spokesperson for the Casamitjana’s former employer said: “The League Against Cruel Sports is an inclusive employer and because this is a hearing to decide whether veganism should be a protected status, something which the League does not contest, it would be inappropriate for us to comment further.”

Earlier this year, research by Crossland Employment Solicitors found that 24% of employers showed a lack of understanding of veganism, with many believing it was a lifestyle or dietary choice rather than a genuine belief in animal welfare or the protection of the environment.

The research also considered the experiences of vegan employees in the workplace; 45% believed they had been discriminated against because they were vegans, 96% had to sit on leather furniture at work and 86% had to use soap in workplace toilets that had been tested on animals.