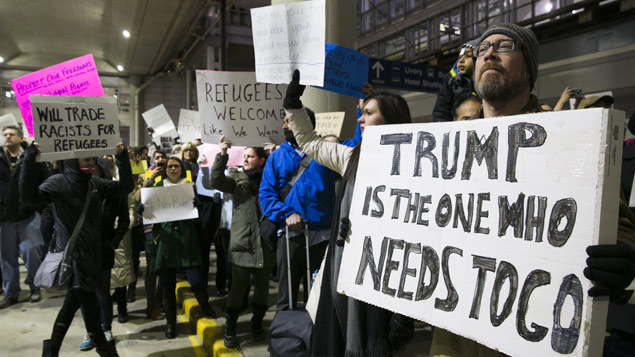 The US Embassy has revised its advice to travellers after President Donald Trump’s executive order on immigration led to confusion.

The order, signed on Friday, has halted the US refugee programme for 120 days, put an indefinite ban on Syrian refugees coming into the country, and suspended entry for all nationals from seven countries: Libya, Sudan, Somalia, Yemen, Syria, Iraq and Iran.

Anyone arriving in the US from one of these countries faces a 90-day visa suspension.

In a statement at the weekend, foreign secretary Boris Johnson explained that the order would only apply to individuals travelling from one of the seven countries, and that those with dual nationality would not be affected, unless they were travelling directly from that named country.

The US Embassy has now confirmed this to be the case, but only after a seemingly contradictory statement issued yesterday, which said:

“If you are a national, or dual national, of one of these countries, please do not schedule a visa appointment or pay any visa fees at this time.

“If you already have an appointment scheduled, please DO NOT ATTEND your appointment as we will not be able to proceed with your visa interview.”

It has now revised this advice to highlight a special exemption for dual nationality travellers from the UK. Its statement today reads:

“Dual nationals of the United Kingdom and one of these countries are exempt from the Executive Order when travelling on a valid United Kingdom passport and U.S. visa.”

Prime Minister Theresa May was criticised over the weekend for not condemning the order more strongly after she said she “did not agree” with the restrictions but refused to elaborate further.

Numerous US employers have criticised the policy, including Apple CEO Tim Cook, who wrote in a memo to employees: “We have reached out to the White House to explain the negative effect on our coworkers and our company.”

He added: “Apple would not exist without immigration, let alone thrive and innovate the way we do”.