The introduction of gender pay gap reporting has shifted the onus of responsibility for solving the gender pay gap to employers. As the Women and Equality Committee publishes its report on fathers and the workplace, Duncan Fisher examines the issue of fathers looking after children and says it’s up to employers to push for a level playing field.

Research published in Denmark this year shows that the gender pay gaps in different countries – UK, USA, Denmark and Sweden – are all converging to roughly the same level, 15-25%, and stubbornly sitting there.

The researchers focused on what happens at the moment men and women have their first baby. Parenting influences women’s earnings, not men’s. A 30% gender pay gap opens up immediately, after which things improve slightly, but it stays at roughly 20% for the next 10 years. 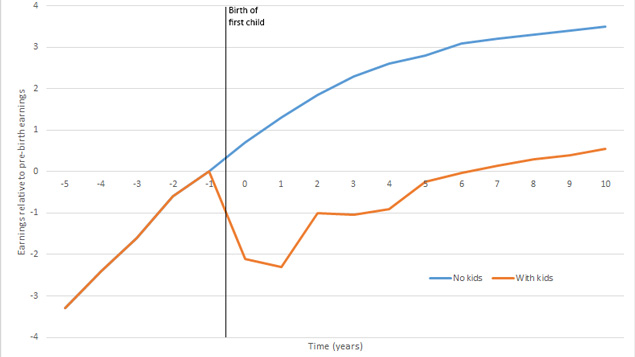 Earnings impact: Women who have children vs those who do not
Graphic by Personnel Today based on data from Kleven, Landais and Søgaard

A recent report by the Institute of Fiscal Studies identified part-time work for mothers as another key driver. People don’t progress as fast in their career if they work part-time. Recent ONS figures show that, at the age of 21, women and men are working pretty similarly, but by the time they reach their 30s, 90% of men are working full time and only 60% of women are.

Harvard economist Claudia Goldin argues that in many industries, flexible working – a necessary requirement for anyone with caring responsibilities – has an “amenity cost”. If women prioritise “family amenity over pecuniary awards” more than men do, then there will be a gender pay gap.

But employers are not only landed with having to deal with parenting choices, they have to do so in the face of Government heavily incentivising mothers to do more caring than fathers.

Last year in Ali vs Capita Customer Management the employment tribunal upheld the case of a father who claimed that 14 weeks’ paid leave for mothers and only two weeks for fathers is sex discrimination, although an appeal is pending.

Employers who top up statutory maternity pay are making things even more unequal. A 2017 survey of 341 companies found 95% enhanced maternity pay, often to a significant extent, but only 4.4% enhanced paternity pay for even part of the two weeks.

Aviva has taken a lead in the UK by declaring that mothers and fathers will be treated exactly the same, following the likes of Facebook and Google in US. But Government policy makes supplying such equality an expensive business in the UK: £7,200 per family on average.

Shared parental leave has proved spectacularly unpopular with parents and difficult for employers to implement. Of the 37% of parents who are actually eligible for it in the first place, only about 2% have used it; that’s less than 1% of the total.

The recent £1.5m ‘share the joy’ campaign announced by the Government won’t make any significant difference. The problem is the shared parental leave policy, not parents being in need of Government education”

For a sense of perspective, this can be compared with the rates of use by fathers of parental leave in other jurisdictions, for example, 91% in Iceland, 86% in Quebec and 63% in Portugal.

In the UK, the shared parental leave entitlement is given to mothers, for them to donate some to their partners. This is a design fault widely regarded by those who study leave systems globally to be fatal.

The recent £1.5m “share the joy” campaign announced by the Government won’t make any significant difference. The problem is the shared parental leave policy, not parents being in need of Government education.

What employers can do

The good news for employers is that mothers and fathers do want to do things differently and would if the playing field were level.

Research in the US funded by non-partisan think tank Pew in 2015 found that fathers were just as likely as mothers to say that parenting is extremely important to their identity (57% and 58% respectively).

The same research found that 48% of fathers felt they were not doing enough caring. BabyCentre research in the same year found 1 in 3 fathers feeling overwhelmed by the challenge of meeting unchanged work expectations and radically expanding caring expectations.

Earlier Pew research in 2013 found that working fathers were as likely as working mothers to say they prefer to be at home with their children but cannot because they have to earn instead (48% of fathers vs 52% of mothers). According to Google in 2017, millennial fathers were watching more parenting-related videos on YouTube than mothers.

This is not to say parents would make equal choices and share everything 50/50 on average. That won’t happen any time soon and that means a gender pay gap will remain. But if Government and employers offer a level playing field, then they have done their job. The ultimate aim is free choice for parents, not social engineering.

Employers need to promote flexible working proactively to men. I regularly run workshops for fathers for big employers. I ask each time who is using the firm’s official flexible working policies and who is doing it “under the radar”.

Invariably, only a tiny minority are using the official policies and everyone else is boxing and coxing, often showing remarkable creativity to sustain productivity and a relationship with their children at the same time.

A level playing field means fathers knowing as much about flexible working opportunities as do mothers and feeling just as able to use them. That means proactive communication in-house, with meetings, networks and regular communications specifically for fathers. All this has proved popular in other workplaces and, if advertised well, the announcements alone help to communicate a new message.

Employers and millennial parents can do much together to bring about more equality and to tackle the gender pay gap.

Disability: Access to Work grant rises by a third

Why parental leave policies should be used to...

How to support staff with perinatal mental illness

Six in 10 would change jobs for better...