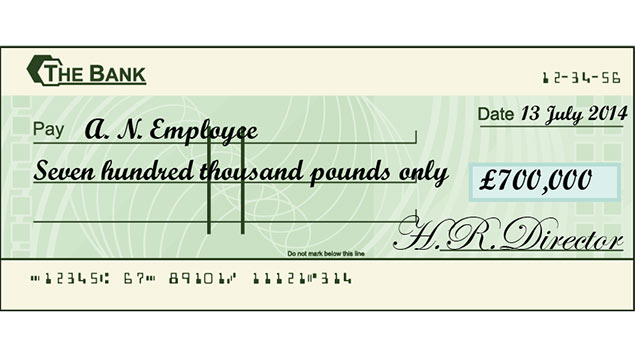 Since the introduction of fees, the employment tribunal has, thankfully, become a less common destination for the HR professional. However, although the number of tribunal claims may have fallen by between 70 and 80%, when a case does come to court, the amount of the award can cost the employer dearly.

Police forces, local authorities, hospitals and banks were among the organisations that had to pay some of the more expensive awards in 2014; Stephen Simpson rounds up 10 of the largest amounts paid to claimants.

In Richman v Knowsley Metropolitan Borough Council, a disabled support worker with a bipolar disorder was awarded £101,183 for the way in which disciplinary allegations over an altercation with a member of the public were handled.

2. Disciplinary procedure not adapted for NHS worker with learning difficulties

In Benedetto v Guys’ and St Thomas’ NHS Foundation Trust, the disciplinary process was not adapted for a kitchen assistant with a “very significant” learning disability who was accused of spitting in a colleague’s coffee. The kitchen assistant was awarded £121,863 for unfair dismissal and disability discrimination.

3. Disciplining of RBS employee should have been delayed because of depression

In Bahra v Chief Constable of Bedfordshire Police, a long-serving police officer of Sikh origin successfully claimed that Bedfordshire Police committed race discrimination against him after he was passed over for promotion. He was awarded £209,188.

In Horler v Chief Constable of South Wales Police, the employment tribunal ordered South Wales Police to pay £230,215 for disability discrimination to a police officer who was required to retire because his knee injury meant that he was unable to carry out front-line duties. The tribunal found that the police force had not met its duty to make reasonable adjustments because it had failed to consider alternative posts for him.

In Harris v Monmouthshire County Council, a senior education welfare officer was awarded £238,216 for unfair dismissal and discrimination arising from disability. The award was made following an employment tribunal finding that the council mishandled her ill-health dismissal.

7. Executive made redundant after blowing the whistle

In Gill v Sweett (UK) Ltd, an executive who was made redundant after he made disclosures in a grievance about accounting irregularities was awarded £254,611 for unfair dismissal.

In Wright and others v Purple Parking Ltd, an employer that dismissed drivers over 67 years of age after claiming that its insurance provider would not insure them has admitted liability for age discrimination and unfair dismissal midway through the drivers’ case, and has been ordered to pay more than £700,000 to 20 drivers.