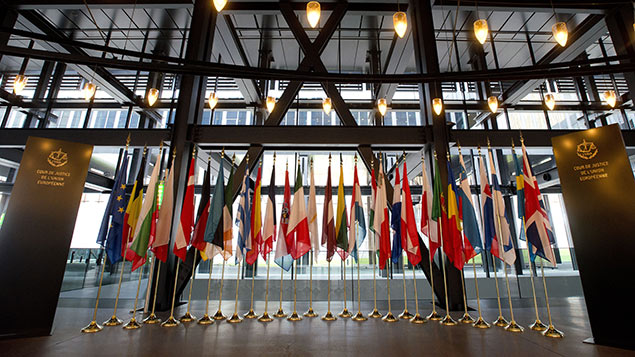 Inside the European Court of Justice, Luxembourg. REX/Geoff Pugh

In DLA Piper’s latest case report, the European Court of Justice (ECJ) held that a pay scheme for civil servants that determined their level of pay by reference to their age at the time of recruitment was in breach of EU discrimination law.

The Equal Treatment Framework Directive lays down a structure for combating discrimination on a number of grounds, including age, and prescribes rules on employment and working conditions, such as pay.

Direct and indirect discrimination is prohibited under the Directive. However, member states are permitted to allow differences in treatment on the ground of age when the differences can be objectively and reasonably justified by a legitimate aim, and the means of achieving that aim are appropriate and necessary.

The claimant and others were employed as civil servants by the German Government. Their pay stage within a particular pay grade was calculated under federal law by “seniority”, a measure primarily calculated by reference to the individual’s age at the time of recruitment.

A new pay scheme was introduced in 2011 that removed the reference to age and, for those working in Berlin, transitional provisions were introduced that used the previous pay scheme as a starting reference for pay under the new scheme.

Their claims were initially unsuccessful and, on appeal, the court stayed the proceedings and referred the matter to the ECJ.

The ECJ had to determine whether the “seniority” measure could be maintained in the German law on civil servant remuneration or whether it constituted age discrimination that could not be legitimately justified. The ECJ held that determining the pay grade with reference to seniority on the basis of the individual’s age was direct discrimination, violating the provisions of the Directive.

The ECJ found that, while the law discriminating on the ground of age could not be justified, the transitional provisions pursued the legitimate aim of protecting the Berlin civil servants from the likely loss of salary that would have resulted had there been no such provisions.

In considering whether or not the provisions went beyond what was necessary to achieve this, the ECJ confirmed that financial burdens and administrative difficulties cannot justify a failure to comply with the Directive.

However, it commented that the management of the scheme must also remain technically and economically viable. It would not have been realistic to calculate, on a case-by-case basis, the difference between the pay each individual actually received and what they would have received had age been removed from the calculation. The ECJ found that the transitional scheme did not go beyond what was necessary and was not a breach.

Although the existence of comparable laws in the UK is unlikely, the comments of the ECJ regarding the potential justification of the transitional provisions are noteworthy. The ECJ accepted that transitional arrangements that involve some degree of discriminatory treatment could be justified if there is no technically and economically viable alternative.