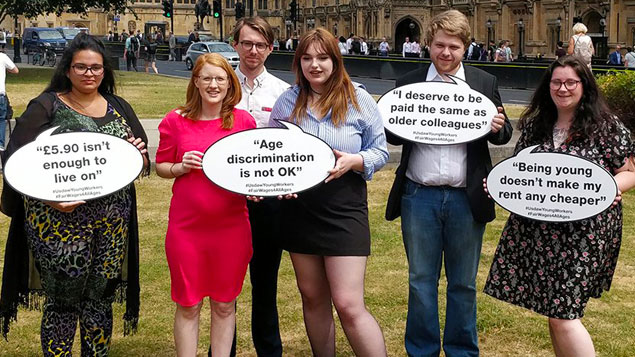 A Labour MP is urging the government to end the exclusion of under 25s from the national living wage after it was revealed younger workers are paid a third less than their older colleagues.

Holly Lynch is to put a private members’ bill before parliament that seeks to ensure all workers over the age of 18 receive the same minimum wage entitlement.

Currently, only those aged 25 or older are eligible for the higher national living wage, which Lynch believes amounts to age discrimination.

The national living wage was introduced in April 2016, but only for those aged 25 or older.

Analysis by the House of Commons Library shows that a worker aged 25 working 37.5 hours a week at the minimum wage will earn £3,774 a year more than an 18-year-old colleague working the same hours – 33% more.

Lynch is backing the National Living Wage (Extension to Young People) Bill, which comes before MPs tomorrow and is “a chance for MPs to reverse one of this government’s most divisive policies”.

“It’s appalling that this government has continued with a policy to keep pay low for younger workers, leaving them thousands of pounds a year worse off than older colleagues,” she said.

“Rent is so costly for many young people, food and utilities are no cheaper and many are falling into debt. Yet the government are happy for them to receive a wage which will barely cover the essentials.”

Four out of five (79%) employers believed the national living wage should be extended to those under 25, according to a survey by the Young Women’s Trust.

Its report – Paid less, worth less? – said 21% of employers thought being entitled to the same rate of pay as older colleagues was “the single most important thing for young workers” and 44% said it was a top priority.

Dr Carole Easton OBE, chief executive of the Young Women’s Trust, said: “We all need a basic amount of money to get by, no matter how old we are. The bus to work costs the same, whether you’re 24 or 26. Gas and electricity costs the same. Rent doesn’t cost any less in your early 20s.

“Politicians should support young people seeking to be financially independent by significantly increasing the apprentice minimum wage and changing the law to ensure under-25s are entitled to the same national living wage as everyone else. This would benefit businesses and the economy too.”