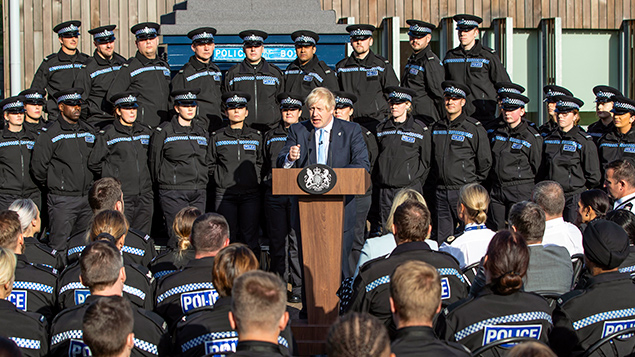 The chief constable of West Yorkshire Police has criticised the prime minister for making a political speech about Brexit while the force’s student officers stood in the background.

Boris Johnson has faced condemnation for failing to respect the impartiality of the police during the event which was supposed to publicise government plans to recruit 20,000 additional officers.

Police officers and trainees are overstretched and need to be able to get on with their job, not have to waste time listening to Boris Johnson’s political press conference. This is an abuse of power by Boris Johnson, making so many police stop their training and work to be part of his political stunt” – Yvette Cooper

Chief constable John Robbins said: “I am pleased that we were chosen as the focal point of the national recruitment campaign launch, but the good news of extra officers was overshadowed by the media coverage of other events.

“It was the understanding of West Yorkshire Police that any involvement of our officers was solely about police officer recruitment. We had no prior knowledge that the speech would be broadened to other issues until it was delivered.”

The prime minister’s visit to the Carr Gate police training facility near Wakefield was scheduled to include a five-minute speech by the prime minister followed by media questions to launch the recruitment campaign, followed by a visit to the National Police Air Service (NPAS) where Johnson was to deliver a 10-minute speech to the media, without police officers present.

Robbins said: “Minutes before the speech, we were told that the NPAS visit and subsequent brief to a small media pool had been cancelled. I was therefore disappointed to see my police officers as a backdrop to the part of the speech that was not related to recruitment.”

John Apter, chair of the Police Federation, said: “I am surprised that police officers were used as a backdrop for a political speech in this way.

“I am sure that on reflection all concerned will agree that this was the wrong decision and it is disappointing that the focus has been taken away from the recruitment of 20,000 officers. This is what we should be talking about – this is what is important.”

Around 30 officers stood behind Johnson as he said he would rather be “dead in a ditch” than agree to a no-deal Brexit. The speech started late and one trainee officer was taken ill after standing in the sun for over an hour.

The West Yorkshire police and crime commissioner, Mark Burns-Williamson, called on Johnson to apologise. “To use police officers as the backdrop to what became a political speech was inappropriate and they shouldn’t have been put in that position. It clearly turned into a rant about Brexit, the opposition and a potential general election. There’s no way that police officers should have formed the backdrop to a speech of that nature.”

Shadow policing minister Louise Haigh has written to the Cabinet Office asking why the police were used for a highly political speech: “Not only was the precious time of these officers wasted, either by diverting them from their duties or depriving them of much-needed rest, but through no fault of their own they were put in an intolerable position by the nakedly party-political direction the event took.”

She added: “Police regulations are clear that they are strictly non-party political and cannot give the perception of such.”

Yvette Cooper, chair of the home affairs select committee, tweeted: “Here in Wakefield district we’ve lost half our neighbourhood police and violent crime has just gone up by 33%. Police officers and trainees are overstretched and need to be able to get on with their job, not have to waste time listening to Boris Johnson’s political press conference.

“This is an abuse of power by Boris Johnson, making so many police stop their training and work to be part of his political stunt. They have a job to do here in West Yorks, and they train and work hard for the whole community – completely unacceptable to use them in this way.”