Apprenticeship starts continue to fall a year after levy introduced 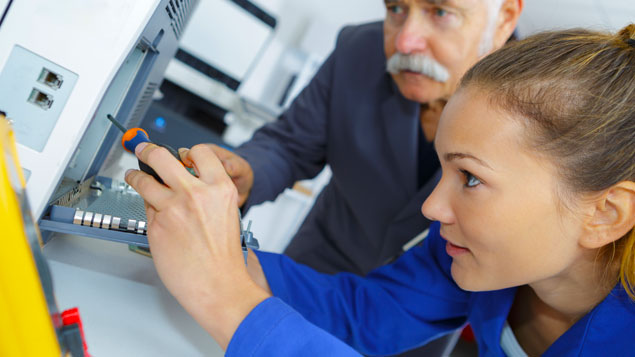 There has been a steady decline in the number of apprenticeships begun after the apprenticeship levy was introduced last year. But why has a scheme that intended to encourage apprenticeship take-up had such a poor response? Ashleigh Wight looks at some of the reasons behind the downward trend.

The number of people starting an apprenticeship this academic year so far has plummeted 28% compared with the year before, prompting calls for an urgent review into the way the apprenticeship levy is working.

How can an employer access funding from the apprenticeship levy?

Many have blamed the apprenticeship levy, which came into effect in April 2017, for the downturn in apprenticeship starts. The levy has been criticised as being complicated or too time-consuming to draw-down apprenticeship funding, while the requirement for 20% of training to be completed “off-the-job” has been a barrier for some employers.

Employers with a payroll of £3m or more are required to pay 0.5% of their total pay bill towards funding for apprenticeship programmes. They are able to recover £15,000 to put towards hiring and training an apprentice, but so far take-up has been limited; only £108m of the £1.39bn funding available at the beginning of April had been used..

The Government attempted to defend the controversial levy in an open letter this week, claiming there are “diverse and high-quality” opportunities on offer, with “world leading” companies like Google and Facebook offering new apprenticeships.

The letter, written by skills minister Anne Milton and signed by MPs, management schools and companies, reads: “University should not continue to be viewed as the only route to a successful career. Giving people choice is essential, whether they pursue a technical route or an academic one. That’s why we should support employers in making use of the levy, and in providing opportunities for people to learn, earn and get on in life.”

The DfE suggested that there was an “unusually large” increase in the number of apprenticeships began in March and April 2017, ahead of the introduction of the levy, and an unusually large decline in starts in May 2017, which might exaggerate the size of the downturn. But there is still a long way to go before the government can get close to achieving its target of three million apprenticeship starts by 2020.

With the Government showing no intention of abandoning its three million target, start numbers are now so far behind the curve, action has to be take now to reverse the falls. They are damaging to productivity, social mobility and the labour market response to Brexit” – Mike Dawe, AELP

Organisations claim the figures show the need for reform is obvious. But what do employers dislike about the levy?

The CMI has urged the DfE to listen to businesses and reform the levy, including redrawing the funding bands to reflect the true cost of apprenticeship provision, and support the development of quality apprenticeship programmes rather than focusing on achieving a numerical target.

Brian Berry, chief executive at construction sector trade association the Federation of Master Builders, believes that the construction industry would have a better chance to tackle its skills crisis if the training funds could be used in a more flexible manner.

“The Government should allow large companies to pass more of their levy vouchers down through their supply chains if the company itself is not in a position to train apprentices,” Berry urges. “Currently large firms are only permitted to pass 10% of their levy funds down to their sub-contractors and others in their supply chain. There needs to be much greater flexibility than this.

“In the construction sector, larger firms often do not directly employ on-site tradespeople or directly train apprentices and so there is a real danger this industry and others will continue to fail to take advantage of the apprenticeship levy if we can’t change this.”

We know that employers and providers have been cautious about embarking on these programmes, partly because of the negative publicity around concerns about the apprenticeship levy and its efficacy” – Ben Rowland, Arch Apprentices

Look beyond the levy

“We know that employers and providers have been cautious about embarking on these programmes, partly because of the negative publicity around concerns about the apprenticeship levy and its efficacy. We also know from our own experience – where we engaged with the levy and employers very early, from 2016 onwards – that significant growth is possible,” he explains.

Rowland predicted that apprenticeship starts will plateau over the summer but surge in the Autumn when people traditionally begin training programmes. Indeed, DfE figures show that more than 60,000 apprenticeships began in September 2017 and more than 40,000 in October.

But critics are pessimistic about the Government achieving its target of three million apprenticeship starts by 2020. Mike Dawe, chief executive at the Association of Employment and Learning Providers (AELP), believes it should stop charging SMEs for levels 2 and 3 apprenticeships for 16-24 year olds if it is to boost apprenticeship numbers.

“With the Government showing no intention of abandoning its three million target, start numbers are now so far behind the curve, action has to be take now to reverse the falls. They are damaging to productivity, social mobility and the labour market response to Brexit,” he adds.