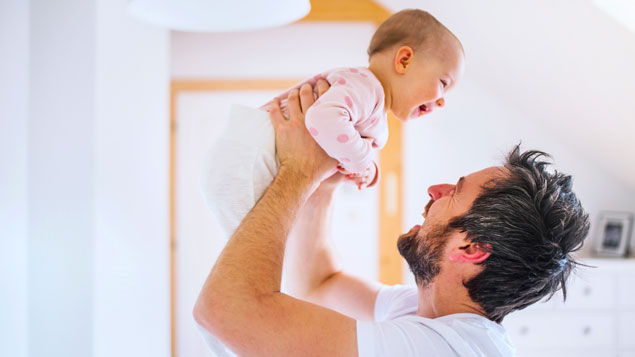 One in four (23%) men who became a father last year were not eligible to receive statutory paternity pay.

More than 140,000 new fathers were not able to claim their up to two weeks’ statutory paternity pay between April 2017 and March 2018, according to analysis of labour force statistics by trade union representative body TUC.

How to manage statutory paternity leave and pay (birth)

Around 41,000 could not claim the benefit as they had not been with their employer for a minimum of six months by the 15th week before their baby was due, as required by law.

Self-employed new fathers, of which there were almost 100,000 in the 12-month period, also did not qualify for paternity pay.

The TUC claimed that many new dads forfeited the chance to take time out of work after the birth of their child because they could not afford to take time off work. It said the statutory pay rate of £145.18 a week is less than half of what someone earning the living wage would earn while working a 40-hour week (£313.12).

Frances O’Grady, TUC general secretary, said the government needed to radically overhaul paternity and maternity pay rules: “The current system is too complicated, pays too little, and excludes too many workers. All dads should be entitled to paternity pay from day one in their job – regardless of what kind of contract they have.”

Despite moves by the government to encourage parents to share time out of work following their child’s birth, take up of shared parental leave was estimated to be as low as 2%.

The TUC called for all workers to be entitled to statutory paternity, maternity and shared parental pay as soon as they begin their role.

The government has rejected several recommendations by the Women and Equalities Committee to improve the rights of working fathers. These included increasing statutory paternity pay to 90% of fathers’ pay, exploring the viability of a new policy of 12 weeks standalone paternity leave as an alternative to shared parental leave, and harmonising workplace rights for agency workers or self-employed dads with those for employed fathers.

“We know that many men, particularly younger fathers, want a better work-life balance and resent work interfering with family life, but they are not getting these opportunities. For example, fathers are twice as likely to have flexible working requests turned down as mothers,” explained Chloe Chambraud, gender equality director at Business in the Community.

“This represents a significant risk to businesses and may result in their best talent – both male and female – leaving for employers who are adapting to these changes and are better equipped to balance the needs of individuals and the organisation.”

According to separate survey from Monster.co.uk, half of workers did not know if their employer offered shared parental leave. A quarter said they were only told about their organisation’s policy when they asked directly, and 47% of HR professionals did not actively promote shared parental leave to their staff.

To improve take-up of shared parental leave, Monster.co.uk’s VP of marketing for Europe Sinead Bunting suggested organisations should “champion” fathers who take time off with their baby.

“A lot more needs to be done by business to see real positive effects and a shift in attitudes, as we believe this is the single most important initiative needed to deliver true equality to the workforce,” she said. “To remove the associated stigma for men with shared parental leave and become more common it must become ingrained in the culture of the business.”