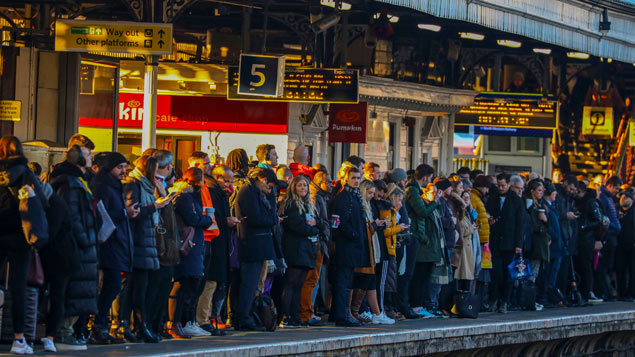 Commuters waiting for a train on the first day of SWR's strike. Image: Alex Lentati/LNP/Shutterstock

Commuters will be given a “basic right” to get to work each day under a new law set to be unveiled this week.

Transport secretary Grant Shapps said a Bill will enshrine in law minimum service levels on key transport services, such as buses and trains. This will mean employees will still be able to travel to work on public transport during industrial action.

Impact of strikes on commuters

Travel disruption: how to deal with staff who are late for work

He said the legislation, which will be outlined in the Queen’s Speech on Thursday, will prevent trade unions from holding passengers “to ransom” during disputes.

Shapps told the Evening Standard: “It is a basic right for workers to be able to get to work.

“The ability of a few people to prevent everyone from being able to earn a living has to come to an end.

“The new law will prevent London being brought to a standstill, with all the additional environmental damage done by people reverting to cars.

“There will be a bare-bones service provided, preventing ordinary workers being effectively held to ransom.”

Meanwhile, members of the RMT union have started a third week of strike action on South Western Railway in a dispute over the role of guards on trains and “driver only” operation. The strike is set to continue until January as attempts to resolve the issue have so far been unsuccessful.

The RMT said any law that bans transport workers from striking would deny staff a “basic human right”.

General secretary Mick Cash said: “Instead of attacking rail workers fighting to defend safety and disabled access any responsible government would be tackling the scandal of private profiteering on Britain’s railways which has reduced services to chaos.”

The Department for Transport has been contacted for comment.