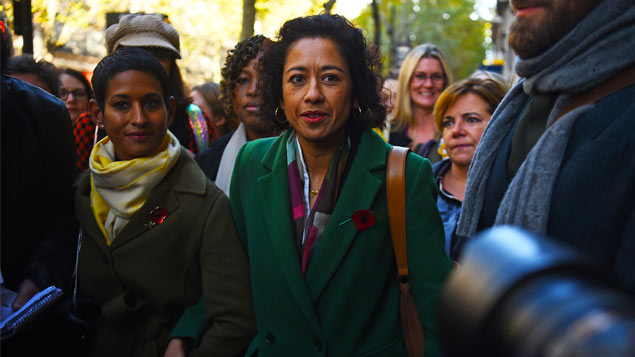 BBC journalist Samira Ahmed is taking an equal pay case against the broadcaster to an employment tribunal, claiming she was paid 85% less than a man doing equal work.

Ahmed, who has presented Newswatch since 2012, is seeking hundreds of thousands of pounds in back pay because she claims she was paid significantly less than Jeremy Vine, who she considers her male comparator for his work on BBC’s Points of View.

Although her pay increased to £465 per episode in 2015, she said it was reduced again when the BBC moved presenters onto employment contracts.

The National Union of Journalists, which is supporting Ahmed with her claim, said both presenters were doing work of equal value as both worked on presenter-led programmes just under 15 minutes in length.

Ahmed said: “I have a sense of pride working for a public service broadcaster which seeks to represent the diversity of Britain and its licence fee payers.

“On the back of my BBC ID card are written the BBC values which include ‘we respect each other and celebrate our diversity’ and ‘we take pride in delivering quality and value for money’. I just ask why the BBC thinks I am worth only a sixth of the value of the work of a man for doing a very similar job.”

Points of View is an entertainment programme with a long history and is a household name with the public. Newswatch – while an important programme – isn’t” – BBC spokesperson

Michelle Stanistreet, NUJ general secretary, said: “The scourge of unequal pay has no place in our public service broadcaster and that’s why the NUJ is backing Samira’s case and many others.

“Unfortunately, despite Samira going through a lengthy and frustrating internal process in the hope that a sensible solution could be achieved, the BBC has not resolved this case and it will now be for the tribunal to determine whether this monumental pay gap is appropriate and defensible.

“Samira is to be congratulated for her persistence and determination to secure fair and equal treatment by her employer.”

The BBC said in a statement: “The BBC is committed to equal pay. Points of View is an entertainment programme with a long history and is a household name with the public. Newswatch – while an important programme – isn’t.

“Samira was paid the same as her male predecessor when she began presenting Newswatch. Gender has not been a factor in levels of pay for Points of View. News and entertainment are very different markets and pay across the media industry reflects this.”

While Newswatch and Points of View are similar in format – both relay readers’ opinions on BBC content – the latter is focused solely on news and appears on the BBC News Channel, not on BBC One.

Ahmed took over Newswatch from Ray Snoddy, who presented the programme since its launch in 2004. Points of View began in 1961 and has been presented by numerous celebrities including Anne Robinson, Carol Vorderman and Sir Terry Wogan.