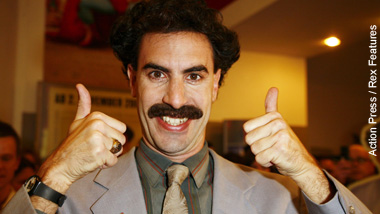 An employment tribunal has ruled that using the name “Borat” to refer to someone from Eastern Europe amounted to direct race discrimination.

In July 2007, Mr Ruda, who is Polish, began work as a quality assurance engineer for Tei, an engineering company in Wakefield, West Yorkshire. In 2010, he brought a number of claims against the company, including race and sexual orientation discrimination.

Mr Ruda, a welder, claimed that, in the autumn of 2007, he had been given the nickname “Borat”, the name of the film and television character created by by Sacha Baron Cohen. The allegation was one of more than a dozen, the vast majority of which the tribunal rejected, describing Mr Ruda’s evidence as “less than persuasive and less than honest”.

However, the tribunal held that Mr Ruda had been harassed on the grounds of race by a colleague calling him “Borat” and that the use of the nickname created a degrading and humiliating working environment for him. The nickname also constituted direct race discrimination. The judgment explained that someone who had all the characteristics of Mr Ruda but was neither from Poland nor perceived to be of Eastern European origin would not have had the nickname applied to him.

The tribunal also held that Mr Ruda had been subjected to sexual orientation discrimination by a colleague’s use of the words “gay” and “wanking” towards him.

Stephen Simpson, senior employment law editor at XpertHR, said that the case should act as a warning for employers: “Employees and managers may need to be reminded that it can be race discrimination to harass or treat less favourably someone on the basis of nationality, which is given the same protection under legislation as the colour of someone’s skin.

“Giving a worker a nickname based on his or her country of origin, or stereotypes from that part of the world, risks a finding of harassment and direct discrimination. Other similar examples that have been found by the tribunals to be discrimination include calling an Irishman ‘thick Paddy’ and references to Hitler and the making of Nazi salutes to a German worker.”

XpertHR’s In the employment tribunals section provides in-depth commentary on the case, including practical tips for employers on this topic. A full transcript of the case ruling is available for XpertHR subscribers.