Employment tribunals have no jurisdiction over US bases in UK 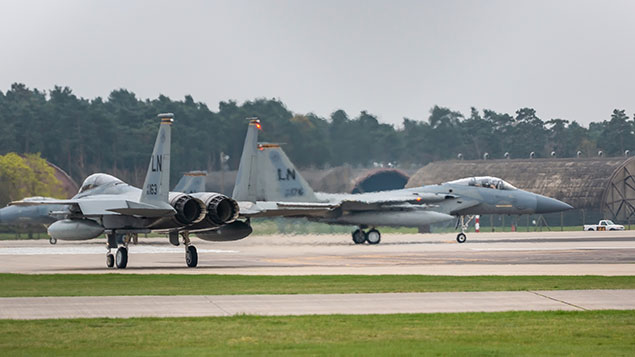 An employment tribunal has accepted that the US government can’t be investigated for breaches of UK employment law in facilities operated in the UK by the US military, even if those who work there are UK citizens.

The employment judge came to this verdict last month after two women who lost their jobs at US air force bases in the UK were told they had no right to pursue discrimination claims.

The women’s legal case was thrown out after Washington argued successfully that UK employment tribunal rulings had no legal force at such places.

Firefighter Caroline Wright said she had been wrongly removed from her job in 2017 after she had been diagnosed with epilepsy and had been left in “absolute legal limbo”. She had been employed at RAF Croughton, a highly important US Air Force Europe (USAFE) communications base, which coincidentally was also the home to Anne Sacoolas, the US citizen who claimed diplomatic immunity following the death of teenage Harry Dunn in a road accident outside the base.

Miss Wright told the tribunal that the US air force had eventually offered her a clerical role that paid £13,000 less a year than her firefighting role. She resigned in January 2018 and filed a claim of disability and sex discrimination.

The second claimant, Anthea Webster, had worked as a records officer at F-15 fighter base RAF Lakenheath in Suffolk for seven years but, in 2017, despite being rated as outstanding for each year of her employment, had been dismissed after a period off work because of the effects of complex regional pain syndrome. Her claim was for unlawful sex, race, age and disability discrimination.

Both women claimed constructive dismissal and had been through ACAS early conciliation procedures before presenting their claims.

Tribunal judge George Foxwell said he had sympathy for the women and acknowledged it would “undoubtedly appear unjust” to them that they had been barred from exercising a right available to other Britons.

Both women had been directly employed by the US government as civilian workers, the Cambridge employment tribunal heard over five days. The judge was told that a US military presentation for its British staff had stated that “employees are entitled to all rights and entitlements afforded under UK law”.

However, despite such assurances of the protection of UK law, when Mrs Webster and Miss Wright brought separate compensation claims following their dismissals, the US authorities moved to end the proceedings by invoking “state immunity” rules.

The two women represented themselves at the hearing but were up against an expert US legal team led by international law expert Professor Dan Sarooshi QC who argued that the US was entitled to state immunity whereby its sovereign acts cannot be ruled upon by the courts of another state even if they take place in that state’s territory.

Significantly until 2010 many civilian personnel at such bases were employed by the Ministry of Defence but that year USAFE decided to hire more people directly, to increase control and save money. Both Miss Wright and Mrs Webster were, then, “local national direct hires”.

Mrs Webster was unable to attend certain days of the hearing in person because of pain but contributed to proceedings by telephone.

Judge Foxwell said both women were effectively employed by a sovereign state, the US, despite them believing they had been working for the US Air Force. He said America had not submitted to the jurisdiction of the tribunal – by means of a waiver – and therefore their claims had been dismissed.

Article 6 of the European Convention on Human Rights would appear to conflict with the principle of state immunity but, Judge Foxwell observed, the US is not a party to the Convention and state immunity “is a limitation imposed from without upon the sovereignty of the United Kingdom itself”.

He said they had not been told during their employment that “they might not be able to seek a judicial determination in this country of their employment rights and it will undoubtedly appear unjust to them that they are excluded from rights most other employees and workers in the UK are entitled to exercise.”

Judge Foxwell also praised the women for conducting themselves with great dignity in the hearing “and that none of the reasons for rejecting their claims relates to the underlying merits which have not been considered”.

After the verdict Mrs Webster said: “I’m British, I worked on British soil but it seems like the Americans can act how they want – there is no accountability.”

Miss Wright, 36,  said the ruling “beggars belief”. She added that the US government had spent thousands of dollars on its legal representation simply to deny her her basic human right “not to be discriminated against in the workplace”.

The women said they wanted to appeal but were unable to afford expert lawyers so representation would need to be on a pro bono basis.

Ross Meadows, partner at Oury Clark Solicitors, said the two claimants deserved a lot of sympathy, but “state immunity is a rule of customary international law, which defines the limits of a domestic court’s jurisdiction. It means the UK does not have the right to determine claims which should be decided in the US.

“If the US had also submitted a defence to the proceedings, it would have waived state immunity allowing the employment tribunal to hear the claims.

Meadows said the key points were: