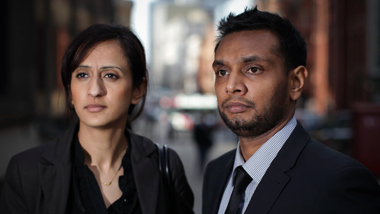 A landmark employment tribunal case, and now a recommendation from the United Nations, is increasing pressure on the Government to make “casteism” a form of race discrimination in the UK. Beth Holmes reports.

There are few more sensitive employment issues than workplace discrimination, whether based on gender, age, race or religion, and many thousands of cases go to tribunal each year.

But there is one situation that is still something of a grey area and, say organisations lobbying for it to be addressed, is becoming an increasing problem in the UK: that of caste discrimination or casteism.

A recent case brought by Indian husband and wife, Vijay and Amardeep Begraj, is the first to cite caste discrimination in the UK.

The couple say that Mr Begraj – from the Dalit caste, deemed to be a “lower” caste than his wife’s Jat caste – was mistreated for that reason by Heer Manak Solicitors, for which they both worked.

This mistreatment is alleged to have included: discouraging the couple from marrying; hurtful remarks when they married and giving her more work and less support. The law firm involved has described the allegations as “outrageous”.

A 10-day hearing ended last month with the tribunal judge re-listing the case for a further 15 days next March.

The legal position is currently this: The Equality Act 2010, following lobbying for several years before by pressure groups, includes a provision (s9(5)) to add caste to the current definition of race. The Act gave power to the Government to activate this clause, something it has so far not done. The Government did commission independent research by the National Institute of Social and Economic Research and a report was published in December 2010 concluding that caste discrimination does exist in the UK.

However, a decision as to whether or not to activate section 9(5) of Equality Act 2010, making caste-based discrimination unlawful in UK has yet to be made even though it was expected earlier in 2011.

“We have brought our findings to the Government and they seem now to have kicked it into the long grass,” Ravi Kumar from the Anti Caste Discrimination Alliance (ACDA) told Personnel Today. “It has baffled us and we wonder whether there may be outside influences at play. It’s been over nine months now.”

Davinder Prasad, general secretary of CasteWatchUK, expressed his frustration at the Government’s failure to activate clause 9(5) of the Equality Act 2010. He said: “They know that the caste problem is global and they do not have the guts to challenge this evil monster of caste because of its international implications.”

While the Begraj tribunal case has now been adjourned until next year, extra pressure has been placed on the Government after the issue was taken to the United Nations, with ACDA having made a formal submission to the UN’s Committee on the Elimination of Racial Discrimination (CERD) last month.

“We lobbied in August to the UN’s CERD; they have included in their recommendations that the minister invokes section 9(5). Still the Government hasn’t responded,” says Kumar.

Christopher Syder, employment lawyer with Davies Arnold Cooper believes the case of Begraj v Heer Manak Solicitors shows that the Act must be amended to clarify whether or not it protects individuals against caste discrimination. “Given the Act’s overriding intention of preventing discrimination, it should address this live issue,” he says.

The caste system and related prejudice is a socio-cultural phenomenon that originated in South Asia. Although its origins are found in Hindu religious scriptures it has crossed religious boundaries and affects people from all faiths.

Social interaction in all walks of life among South Asians, including work, can be significantly determined by caste identities. People who happen to be from “low” caste have suffered the worst forms of social deprivation, oppression, marginalisation and denial of equal opportunities, and campaigners believe that this has now taken roots in UK life and workplaces.

Such grey areas in the law are an HR headache as far as potential litigation is concerned. Prasad says he knows of at least two more cases of caste discrimination that will be taken to tribunal in the next few months. Meanwhile, Syder says: “An amendment to the Act is far more desirable than years of case law development.”

A Government Equalities Office spokesperson told Personnel Today that it is committed to stamping out unfair discrimination wherever it occurs: “The Equality Act 2010 created a power to give legal protection against discrimination or harassment because of caste if there was clear evidence that such a ban was needed.

“We are currently considering independent research into caste discrimination, carried out by National Institute of Economic and Social Research, together with comments made on equality regulations from the Red Tape Challenge website before deciding on what steps to take next.”