By Laura Chamberlain on 24 Nov 2011 in The HR profession 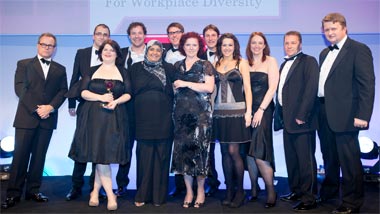 The Co-operative Group was named overall winner at the Personnel Today Awards last night for its attempts to get more people with learning disabilities into the workplace. The company scooped the top prize at the ceremony at the Park Lane Hilton in London after winning the Award for Workplace Diversity.

Nearly 900 HR professionals from some of the UK’s top employers were entertained by host Jack Dee. They also heard from employment minister Edward Davey, who presented the brand new Award for Innovation in Dispute Resolution, sponsored by TCM.

In deciding the overall winner, the judges praised the Co-operative Group for its “very strong” plan of action to bring more people with learning disabilities into the workplace and added that the initiative could be replicated by many other employers.

The Co-operative also landed the Award for Managing Change following two company mergers and the integration of more than 70,000 employees.

For the first time, the overall winner of the Occupational Health Awards was presented alongside those for Personnel Today. East Lothian Council picked up the big prize, after winning Occupational Health’s previously announced Award for Health Promotion and Wellbeing.

Meanwhile, the InterContinental Hotels Group (IHG) won the Award for HR Team of the Year, sponsored by HR Peformance, and the brand new Award for Excellence in Global HR, sponsored by Deloitte. IHG won both awards for increasing the global reach of its HR team across its franchise hotels. Judges commended IHG for the scale and comprehensive nature of its solution.

David Cooper from the Royal College of Nursing (RCN) was named HR Director of the Year, which was sponsored by Pinsent Masons. Cooper was the first HR director to be appointed to the executive board at the RCN and led a transformation project across the business which re-positioned HR within the organisation.

Last year’s HR Director of the Year and judge for this year’s awards, Tracy Robbins of IHG, commented: “This entry showed a sound repositioning of the HR function, with strong metrics. David Cooper achieved results in a challenging environment and gained external recognition.”

Personnel Today’s HR Rising Star Award, in its second year, was won by Lillian Pyburn at Tesco Retailing Services. She was praised for her work centralising the organisation’s recruitment process, which reduced costs and increased the acceptance ratio of new hires.

Photos from the evening are available to view in our gallery on HR Space.

Award for Managing Change: The Co-operative

Award for Excellence in Learning and Development, sponsored by City & Guilds: Rentokil Initial

Award for Innovation in Recruitment, sponsored by TMP: Amey

Award for Excellence in HR through Technology or Social Media, sponsored by XpertHR: Unilever

A full list of the winners with photos and judges’ comments is available here.