Could your office temperature land you in legal hot water? 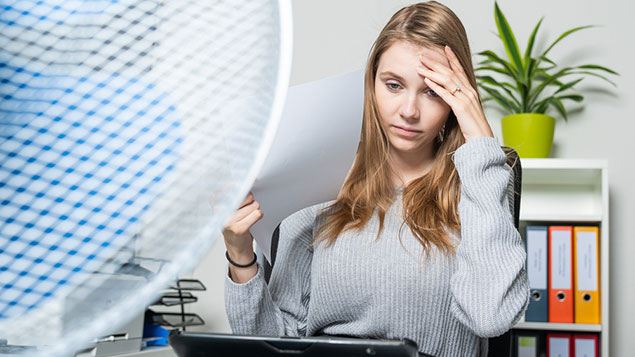 With the heat set to rise into the high thirties this week, could there be legal issues as employers aim to find optimal office temperatures? Kevin Charles explains why managers should pause for thought before turning up the air-con.

As the mercury rises and studies show that women are more comfortable working at 24 to 25°C, which is 2.5°C higher than men, employers could face a battle of the sexes over a hot versus cold office, which could leave them hot under the collar with the law if they fail to take appropriate action.

A recent study by the University of Southern California found that women generally prefer higher indoor temperatures than men, and at higher temperatures perform better in maths and verbal reasoning tests. The study found that women perform significantly worse than men when temperatures fall to 16°C, and do not catch up in verbal tasks until conditions reach at least 22°C.

The findings suggest that gender mixed workplaces may be able to improve productivity by setting the thermostat higher than current standards.

However, in most modern offices, with climate-controlled systems, temperatures are set based on the resting metabolic rate of a 40-year old man which runs up to 30% faster than a woman’s, and as such, female office workers may be placed at a disadvantage in terms of performance.

What the law says

Under the Health and Safety at Work Act 1974, employers must provide a working environment which is, so far as reasonably practicable, safe, without risks to health and safety and which has adequate welfare facilities.

With regard to office temperatures the Workplace (Health, Safety and Welfare) Regulations 1992 place a legal obligation on employers to provide a ‘reasonable’ temperature in the workplace.

This is supplemented by the Approved Code of Practice, which suggests that the minimum temperature in a workplace should normally be at least 16°C.

However, this is considerably below the 20°C, as recommended by the Chartered Institute of Building Services Engineers as an acceptable indoor temperature for offices, and far below the 22°C at which women catch up in performance with men.

The Health and Safety at Work legislation provides employers with considerable room for manoeuver when it comes to setting minimum temperatures for the office and a fairly low hurdle to overcome to comply with the law, which would leave many female office workers out in the cold.

Nevertheless, there are other employment regulations that increase the responsibility on employers to pay more attention to office temperatures, otherwise they may find themselves on the other side of a legal claim.

There is a possibility that setting the office temperature at a level that is detrimental and has a disproportionate effect on women could give rise to a claim of indirect discrimination under the Equality Act 2010.

Although there have been no reported cases, a female employee might argue that the setting of the office temperature amounts to a ‘provision, criterion or practice’, which although applying to all staff, places those within a ‘protected characteristic’ i.e. women at a particular disadvantage, compared to men, as supported by various scientific studies.

While a full discussion around the merits of such a claim is beyond the scope of this article, it is something that employers need to be aware of and may wish to take some steps to minimise the risk.

It is well known that employers are under a duty to make reasonable adjustments for an employee who has a disability, and this may extend to adjustments which militate the effects of the office temperature where an employee’s ‘disability’ is affected by the cold/heat.

For example, a reasonable adjustment might be the provision of a heater/fan, allowing more frequent rest breaks or a review of the office temperature, balancing the needs of other employees.

There is an implied term in every contract of employment that an employer will, so far as reasonably practicable, provide a working environment that is reasonably suitable for employees to perform their contractual duties.

If an employer fundamentally breaches this implied term, for example, by providing an office environment that is too hot or too cold, they could find themselves on the receiving end of a constructive dismissal claim.

However, such a claim would be unlikely to succeed unless it could be shown that the employee was being expected to work in unreasonably hot or cold temperatures, taking into account the particular environment and nature of the work.

There are a few steps which employers can take to avoid employee conflict over the office temperature and meet their legal obligations:

While these basic steps will not guarantee to keep any employer out of hot water they should at least help to ensure that employers remain on the right side of the law.

One Response to Could your office temperature land you in legal hot water?