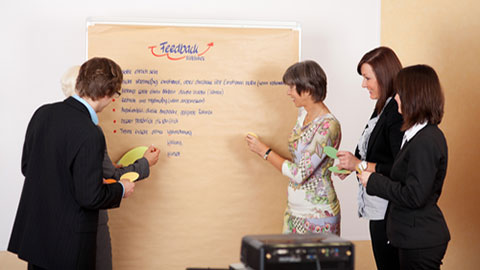 Staff can be cynical about engagement programmes, but suggestion schemes can produce high levels of employee participation and real commercial results. Jo Faragher looks at how to introduce a successful scheme.

Sometimes the smallest ideas make a significant difference. At Sainsbury’s, someone on the shop floor worked out that while the popularity of mangoes went up after a “two for £2.50” deal, the packaging they came in accommodated five mangoes, so there tended to be a lot of wastage because of the odd number. Repackaging the fruit so it came in boxes of six has saved the company around £60,000 – all thanks to a suggestion made to the company’s “Tell Justin” ideas scheme, which has been running since 2004 and has so far generated around 57,000 ideas.

Staff suggestion schemes are nothing new. The concept of a tatty wooden box in the rest area, probably more used to sweet wrappers than ingenious ideas, is part of workplace folklore. More recently, however, employers such as Sainsbury’s ensure their schemes drive real business value, as well as raise employee engagement and participation. Software enables managers to track participation, which means it is possible to demonstrate tangible evidence of how involved staff are with the business, proving the scheme goes beyond a mere show of being interested in what staff think.

Listening to your employees

“It’s a good indicator that people are trying to make the business better,” says Jacki Connor, head of HR for retail and logistics at Sainsbury’s. “Some suggestions don’t work, but we always respond, reply and explain why we haven’t taken them up on the idea. The key thing is you have to listen. The worst thing you can do is ask for suggestions, but not listen. That actively disengages people.”

The company employs a dedicated team internally to manage the flow of suggestions between staff and the individual departments and directors who decide whether or not they are worth pursuing. This team sits within the colleague engagement team, which reports into Connor.

At the Siemens Automation and Drives manufacturing facility in Congelton, Cheshire, the suggestion scheme is so embedded into working life that Finnbar Dowling, the facility’s managing director, says it is “part of our DNA”. Every employee at the factory works towards a common goal of achieving a 5.5% improvement in productivity each year – driven by the fact that the factory, which produces automation, process control and electrical distribution products, is up against competitors in countries where labour and production costs are far lower. The suggestion scheme, called Ideas Unlimited, is part of a range of initiatives designed to achieve that goal.

Dowling said: “We tell staff their idea has to be authentic, measurable and that there has to be a ‘burning platform’ – that is, a reason for its implementation. Over the years we’ve come to look more towards higher participation and better value suggestions, rather than volume overall.”

So while there were fewer overall suggestions last year, more than 90% of staff had a suggestion validated and the facility achieved the highest savings per head. Staff engagement is high; Siemens measures this as part of Towers Watson’s index, and at this facility it is currently at 93 out of 100 – the highest of any engineering company. Ideas Unlimited is also contributing towards an impressive lift in productivity – this year so far it is up 7.8% year on year.

“Lots of things have contributed to this improvement, not just the suggestion scheme, but it is a staple part of it,” adds Dowling.

Both Siemens and Sainsbury’s manage their schemes online and track how many staff participate, although staff can still submit suggestions via postcards or paper forms from the shop floor.

According to Anthony Denatale, operations manager of ideasUK – an association that promotes employee involvement programmes – a growing trend is for greater collaboration on suggestions: “This may be a system where staff put in ideas, and other staff can vote, comment or expand on them.”

He adds that communicating the status of an idea to staff is key – it maintains momentum in the scheme and reassures staff that their idea has not disappeared into a black hole: “What you’re trying to do is encourage behaviours, so don’t be afraid to say no to an idea. You’re trying to encourage innovation, so it’s important to say ‘you’ve taken time out to provide this idea, here’s the feedback, here’s a model of a good idea’.”

One producer of online suggestion management software is Vetter. With this system, staff can log in and submit suggestions, which are then given star ratings by their peers. If the suggestion averages two stars or more, it means it has been “vetted” (hence the name) and is passed on to a manager. The initial submission is anonymous, so staff can be unbiased about the idea, and the suggester is credited once the idea has been approved.

“Cost saving is a motivation, but most of our customers are attracted to the employee engagement angle,” says Duncan Murtagh, Vetter’s co-founder. “Staff can be sceptical about employee engagement initiatives, but this is tangible and shows that management are interested in what they have to say.”

Who “owns” the employee suggestion scheme differs from one organisation to another – it often rests comfortably within internal communications, but can be a valuable part of HR’s remit because it is so measurable. “Something like this gives more power to HR,” says Murtagh.

Unless there is a circle of continuous communication and feedback, however, a suggestion scheme can fall flat. Many software systems allow both staff and management to track and update the status of an idea. Public recognition of ideas that have worked well can also go much further than a financial reward, says Denatale. “It’s pointless having [an ideas scheme] unless you celebrate success. Staff see another person receiving recognition for an idea and want to emulate that.”

A nominal financial reward for all ideas, not just the good ones, will also go down well.

Often, what drives the success of suggestion schemes is quite simple. Staff who are distributed around the business and interacting directly with customers can often see things that managers can’t.

“Sometimes it’s hard to quantify the sales uplift associated with one idea. But colleagues can see where money isn’t being spent wisely,” says Connor. “One of our values is ‘treat every pound as your own’, and this drives a lot of our ideas.”

It can be hard to demonstrate return on investment on some employee engagement initiatives, but the savings made or revenue generated by suggestion schemes can make a real commercial difference.