Should discrimination laws be scrapped? Nigel Farage’s beliefs vs the legal facts 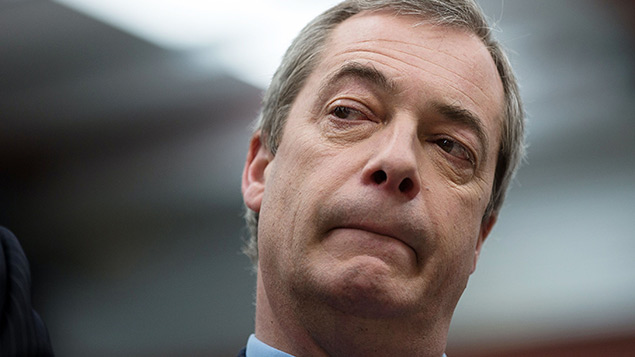 UKIP leader Nigel Farage would scrap "much of" the discrimination law in the UK. Photo: Joel Goodman/LNP/REX

Last week, Nigel Farage, leader of the UK Independence Party (Ukip), said that employers should be allowed to discriminate on the basis of nationality when selecting people for jobs. Employment lawyer Tina Wisener looks what he said versus employment law.

Nigel Farage’s comments on discrimination laws came in an interview with Trevor Phillips for Channel 4’s Things We Won’t Say About Race That Are True, a documentary exploring the possibility that people are too scared to say what they really think when it comes to racial issues.

The situation that we now have, where an employer is not allowed to choose between a British-born person and somebody from Poland, is a ludicrous state of affairs” – Nigel Farage

Farage said he believes that there is too much discrimination law and he would get rid of much of it if he had his way. He told Phillips, former chair of the Equality and Human Rights Commission, that it was ludicrous that employers are not allowed to select between someone born in Britain and someone born in Poland.

Farage said employers should be able to choose on the basis of nationality. When Phillips pressed him if “in ‘Ukip-land’ there would be a law against discrimination on the grounds of race or colour”, he replied, “No, we are colour-blind”.

Nigel Farage’s comments are ignorant and misplaced. An employer is entitled to choose a British-born person over a Polish person, if they are the most suitable person for the job. The equality legislation in the UK is aimed at preventing less favourable treatment. Discrimination laws do not provide for positive treatment.

The UK’s equality legislation has been carefully developed over the past 40 years and plays a vital role in ensuring that those with protected characteristics do not suffer discrimination. Farage is misguided in believing that we no longer need laws to prevent racial and other forms of discrimination, and that all employers would act fairly and reasonably without legislation in place.

The majority of employers do, but it is still the case that some employers would not employ someone from a different racial or ethnic background because of preconceived notions on race.

There is a lot of evidence out there of discrimination against jobseekers with foreign names. One survey found that an applicant who appeared to be white would send nine applications before receiving a positive response. Minority candidates with the same qualifications and experience had to send 16 applications before receiving a similar response.

The same applies to discrimination on other grounds, such as sex, age and disability. The progress that has been made towards achieving equality for women and older people in the workplace could be wiped out if discrimination laws were axed.

The consequences are obvious. If selection is on the basis of race or sex and not merit, standards drop and prejudices are reinforced.

Of course, the Equality Act 2010 does not just outlaw direct discrimination, the focus of Nigel Farage’s attack. It also provides protection against a less obvious form of discrimination – indirect discrimination – aimed at ensuring that apparently neutral requirements or workplace practices do not disproportionately disadvantage one race or sex, for example, unless they can be justified.

An employer is entitled to choose a British-born person over a Polish person, if they are the most suitable person for the job” – Tina Wisener

For example, employers can require that their employees speak a certain amount of English (as they will need to be able to understand instructions) but the level of fluency they will be allowed to insist on will depend on the nature of the role. For instance, a cleaner will not need to be as fluent as a customer service assistant, whose job it is to communicate with customers.

Without equality laws, the workplace would be a very one dimensional place and employers would miss out on the many benefits of working in a diverse environment.

Tina Wisener is a partner at workplace law specialist Doyle Clayton and head of the firm’s Thames Valley office in Reading.
View all posts by Tina Wisener →
Previous Article
Next Article

3 Responses to Should discrimination laws be scrapped? Nigel Farage’s beliefs vs the legal facts