Ethnicity facts and figures must be “explained or changed” 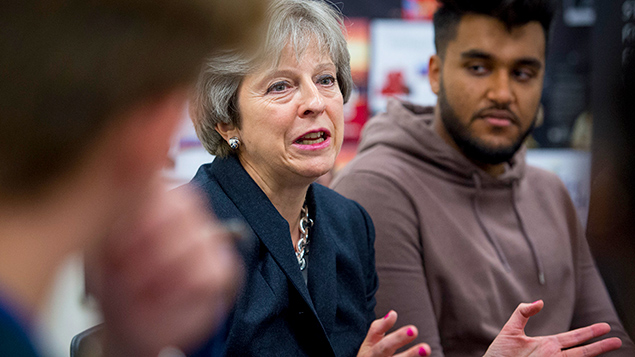 Theresa May at a school in Streatham, south London, ahead of the publication the Government's race disparity audit
Geoff Pugh/Daily Telegraph/PA Wire/PA Images

Theresa May will challenge society to “explain or change” disparities in how people from different ethnic backgrounds are treated, as the Government publishes the results of a wide-ranging audit of public services.

Launching a new website – Ethnicity Facts and Figures – today, the Prime Minister will describe the audit as an “essential resource in the battle to defeat ethnic injustice”.

One of the key findings is that employment rates are higher for white people than for ethnic minorities across the country, with a larger gap in the north (13.6%) than in the south (9%).

The audit has also highlighted that: ethnic minorities are under-represented at senior levels across the public sector; unemployment among black, Asian and other ethnic minorities is almost double that of white British adults;

The website will be a permanent resource, with new data being added over time. A specialist unit, run from the Cabinet Office, will co-ordinate the Government’s work.

May is expected to say: “People who have lived with discrimination don’t need a Government audit to make them aware of the scale of the challenge.

“But this audit means that for society as a whole – for Government, for our public services – there is nowhere to hide. These issues are now out in the open. And the message is very simple: if these disparities cannot be explained then they must be changed.”

In employment, the Department for Work and Pensions will take action in 20 targeted “hotspots”. Measures in these areas could include mentoring schemes to help those in ethnic minorities in to work, and traineeships for 16-24 year-olds, offering English, maths and vocational training alongside work placements.

And in the criminal justice system, the Ministry of Justice will take forward a number of recommendations made in last month’s Lammy Review. This includes working to ensure that our prison workforce is more representative, holding leaders to account for improving the recruitment, retention and progress of ethnic minority staff.

No mention however is made today of David Lammy’s recommendation to “seal” prospective employees’ criminal records from employers, nor the Conservative manifesto pledge of ethnicity pay gap reporting.

The Prime Minister’s recent rhetoric around race has attracted criticism, however. In a letter to the Times signed by, among others, Munira Mirza, the former deputy mayor of London, May is accused of painting an overly pessimistic picture of modern Britain.

“All too often statistics are misused in a way that casts minorities as victims of racism and ‘white privilege’,” the letter says.

“There are disparities: in crime rates, health, employment and education. Historically these differences were exacerbated by racism but it is also true that ethnic minorities tend to be younger, live in urban areas, come from low-income backgrounds and make certain lifestyle choices. In many areas the gap is closing and in some areas ethnic groups outperform.”