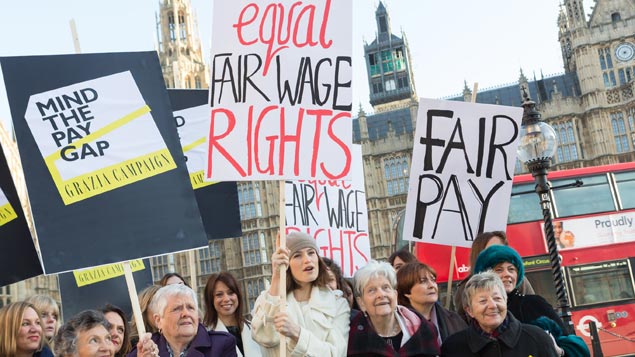 Stars from the musical "Made in Dagenham" show their support for an equal pay campaign. REX

From next year, more than four decades after the 1970 Equal Pay Act became law, all employers with more than 250 employees must report on their gender pay gap. However, Genesis Housing is one of a handful that has already been transparent on pay for some time, discovers Virginia Matthews.

The 1970 Equal Pay Act might have been passed among a barrage of positive headlines, but with close to six years given to implement it, employers of the time had ample time to redefine and re-grade jobs, in many cases effectively perpetuating the inequality.

But what can we expect (likely from March) next year, when mandatory gender pay gap reporting is introduced for firms with 250 employees or more as part of an amendment to the Small Business Bill?

As Britain’s larger firms gear up for unprecedented scrutiny over how they reward their women and men, it is understandable that some employers might be dreading the prospect of publishing and being damned.

For some, there are fears that shining a searchlight on the difference between average basic pay and total average earnings for men and women may lead to an outbreak of hostile headlines and historic equal pay claims.

But for social landlord Genesis Housing, implementation of s.78 of the Equality Act 2010 – which makes gender pay gap reporting enforceable – holds no such fears.

With 60% of the firm’s 1,346 headcount female, a similar proportion to that of its customer base, transparency around the nuts and bolts of gender equality is both a central tenet of its corporate strategy and a surefire way to win brownie points.

As a recruitment and retention tool, its stance on equal pay has proved a particular winner, says the company, which has undergone a radical staff restructuring programme in recent years.

The company claims that many of its recruits – particularly women – “are attracted to us precisely because they can see we take gender equality so seriously”.

As one of more than 200 firms to sign up to the Government’s voluntary “Think, Act, Report” scheme, Genesis is one of only five to have fully reported on its gender pay gap thus far.

With two equal pay audits already under its belt and a third now semi-completed, the firm’s decision to be ahead of both the law and public opinion has proved sound, says Clement Arendse, head of management information and HR systems.

“Our first audit was in 2009, a time when diversity was already a burgeoning corporate issue externally and when internally, we were particularly keen to drive our diversity and inclusion strategy and gain some hard evidence for policy in that area,” he explains.

“Equal pay was one of the elements we believed we could prove our diversity with and we did this by following the requirements of the Gender Equality Duty, considered to be best practice at the time.”

The fact that our gender pay gap was negligible made it easier to be confident when talking about the issue in a way that everyone could understand.” – Clement Arendse, Genesis Housing

Although the results of the first audit – which showed that the overall pay gap was fairly insignificant – were not generally shared with staff, key extracts were published on the company’s website and attracted a modest amount of publicity.

Had the pay gap proved to have been cavernous, Arendse agrees that Genesis would have been rather less keen to trumpet its findings, particularly not in such a lucid form.

“The fact that our gender pay gap was negligible made it far easier to be confident when it came to talking about the issue in a way that everyone could understand and to undertake further work in this area,” he says.

“Given there was nothing too frightening lurking in the heart of the organisation, we felt confident enough to undertake a second audit fairly soon after.”

Today, the range of equal pay and workforce-composition-by-gender metrics available via the firm’s website is extensive.

Female pay levels across different areas of the organisation are reported in full, including those in management and leadership positions. The maternity return rate is included in the statistics and will soon be joined by data on flexible working by gender.

Crucially, the figures are accompanied by a full narrative on gender equality activities, including the organisation’s overall targets for female representation at the top.

The website not only includes data on the male/female split in various job types, but since the end of last year has also included pay levels, starting salaries and appraisal outcomes by gender, much of which goes well beyond the requirements of s.78.

According to Opportunity Now, the decision to publish, voluntarily, such detailed information about its gender profile has helped position Genesis as “an employer of choice for talented women… an inclusive organisation where women can thrive”.

To Arendse, the fear that mandatory full disclosure will prove burdensome and complex for businesses in general is misplaced.

“I wouldn’t agree that gathering relevant information on your gender pay gap is insurmountable or difficult just as long as you have the will and determination to do it,” he says.

“If you have proper data controls in place and a good grasp of your people management structures, you should be able to glean the data reasonably easily and keep up to date with any significant changes.”

Although he recognises that more complicated pay structures than those deployed by Genesis may take time to analyse, he argues that getting back to basics is essential, however complex an organisation’s remuneration arrangements.

“When, as is the case with Genesis, your guiding principle is equal pay for equal work, then it is vital that you trace this right back to your overall salary band structure.

“If your banding structure isn’t right – and we have worked hard to make sure that ours is now built on solid foundations – then you may struggle to get a clear indication of whether or not women and men really are getting an equal deal in your organisation.”

For Genesis, the anomaly that sees the average woman earn 81 pence for every £1 pocketed by the man sitting next to her is a simple matter of unfairness.

“Fairness is the overriding principle that underpins our quest for more and more detailed information on gender metrics and, in practice, means that where we do find any hint of injustice in our treatment of staff, we address it immediately rather than let it continue and cause more resentment,” says Arendse.

“Understanding the historic reasons for any unfairness towards women in your organisation is of course important; just as long as you then go on to sort it out as quickly as possible.”

What Genesis calls its “pioneering spirit” over equal pay led to a second gender pay gap audit in 2011 – again, nothing too substantial came to light. Its third audit will be published later this year.

[Genesis is] an employer of choice for talented women… an inclusive organisation where women can thrive.” – Opportunity Now

Unlike the first two audits, which required help from an external consultancy, number three is being managed in-house by a research department of four. Genesis believes that the data capture and number-crunching phase, followed by the production of an explanatory narrative, will involve around a fortnight of solid work.

“Now that we are more au fait with what the numbers can show us, we are looking at the data from all angles to learn more about what’s going on behind the headline figures,” Arendse argues.

“We accept that bank, contract or temporary workers can be an issue when it comes to drawing up a clear picture of how your people are paid, so we have taken the decision to collate their earnings on a full-time equivalent salary to ensure that everyone is measured from the same baseline.”

With the hourly rate paid to permanent staff mirroring the hourly rate paid to all bank workers – whose numbers fluctuate from month to month – Genesis believes it is now able to provide a more comprehensive picture of salary trends, saying that: “We don’t find that analysing this sort of data is a mammoth task, particularly not given that we invariably have a monthly get-together to see what the numbers are telling us.”

Fear of the unknown

While other firms faced with the prospect of mandatory reporting may fear they will uncover an unacceptably large gap in how men and women are remunerated – perhaps for historic reasons – it all comes down to “what sort of organisation you want to be now”, Arendse believes.

“My own view is that there is no need for firms to panic unless they suspect that something nasty will come out of the woodwork, but even if a large pay gap does come to light, the important thing is what they choose to do next rather than what has gone before.”

For Genesis too, there is more work to be done.

While current data has helped the firm “confirm that there is no structural or systematic discrimination taking place”, Arendse agrees that there may be areas where the data mining needs to go deeper.

He said: “Our organisation has changed dramatically in the past two to three years and there may have been recruitment pressures, particularly for senior roles, which have resulted in random gender pay anomalies which would need to be rectified as soon as possible.

“When it comes to the fight for equal pay, all organisations will find historic distortions and it is important that they address them, but in my view, employers need to start moving forwards, not back, on the issue of equal pay.”