‘Household, we have a problem’: Learning to work at home 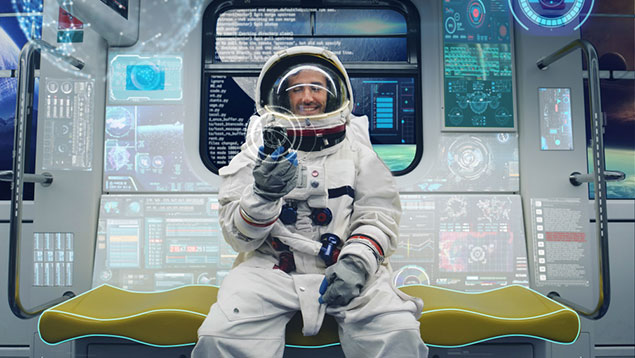 People working from home have much to learn from astronauts
Photo: Shutterstock

In the second in a series of posts about living and working at home, dealing with the challenges and conflicts that may occur, Professor Binna Kandola draws on the experience of astronauts to suggest how we can minimise the irritations of the “capsule environment”.

“Can you keep that racket down? I’m trying to work here.”

“Do you have to do that here? I’m trying to have my dinner.”

“Who left that there? Can you tidy your stuff away after you finished please?”

Just a sample of the daily irritations that I’m sure are occurring in many households around the country at this very moment. Mundane as they sound, these are the very same issues faced by astronauts living and working in the International Space Station. The situation in which many of us now find ourselves in while working from home, has many similarities with the capsule environments extensively researched by NASA.

Let’s take the positives of our capsule environment

Do I have the right equipment?

The physical environment in which people are living and working is recognised as an important determinant factor in performance. These include levels of noise, co-location of facilities, movement through different areas, storage and light.

Levels of noise are a particular distraction to people in capsule environments. A certain level of background noise is almost expected by us; it feels appropriate and comfortable. Too much noise, of course, is both distracting and annoying, but total silence is unnerving also.

It is possible to work in situations where there is considerable background noise – you only have to look at the number of people who are working in busy coffee shops. But here, the noises can be shut out as we have anonymity and little interest in the conversations and activity around us.

Working at home though, we are not anonymous, and so we can’t help but pay attention to what other family members are doing. Putting in headphones and playing music is one way of shutting out the distractions but this will hinder communication with the family members. Another method to adopt is to identify those tasks which particularly require background noise to be much lower and to request others to respect the fact that you will require intense concentration for a short period of time.

Alternatively, pick a time where there are fewer people around so you can concentrate on that particular task.

As in the space station, different activities will be going on right next to one another. You may be working in an area where someone else is trying to cook; someone is trying to study while another one is playing with their Xbox; one person may be doing a Joe Wicks workout while another is on a video conference. The same space will have a variety of different functions, for example, a table will be an office desk, a recreational space and a dining area at different points during the day. This is very similar to capsule environments.

The situation in which many of us now find ourselves in while working from home, has many similarities with the capsule environments extensively researched by NASA”

At least in our homes, we are not expected to also carry out scientific experiments while other people are having a meal next to us. This can obviously be a source of conflict as people feel their activities are not being respected by others in the household.

However, one solution to this is to mark distinctions between different activities at different times of the day. So if the kitchen table is being used as a workplace for the majority of the day, all of the equipment should be moved off the table when it returns to its use as a dining area.

Storage in capsule environments is another important issue. Each astronaut going to the International Space Station is allowed to bring a certain amount of personal items with them, however on leaving, unused items tended to be left behind. Over a period of time, this meant there was a surprisingly high amount of clutter and this started to fill the place up. Sound familiar? This will be an important time to have a good clear out and discard those items which have little use for us.

One of the key issues which contributed to the mental health of people working in these extreme environments is access to windows and natural light. It isn’t just about sitting next to a window, but actually being able to see natural light. This also has a considerable impact on the judgment of the habitability of a particular environment. Sitting next to a window, or just spending time looking out of the window during the course of the day, is something that will be extremely beneficial to us.

Movement from one space and area to another is also important. The key passageways should be kept clear of obstacles so that people can move as freely as possible.

Noise, ease of movement, co-location of activities, clutter and light are some of the key factors which have an impact on performance and relationships in capsule environments. With a degree of forethought and planning, we can make our living and working environments just that little bit more comfortable and habitable.

The highly influential architect Le Corbusier famously said that a house is a machine for living. Nearly 100 years after he made this statement, it is something that it still very relevant.

One Response to ‘Household, we have a problem’: Learning to work at home