By Adam McCulloch on 15 May 2018 in Modern slavery, Latest News, Ethics, Immigration 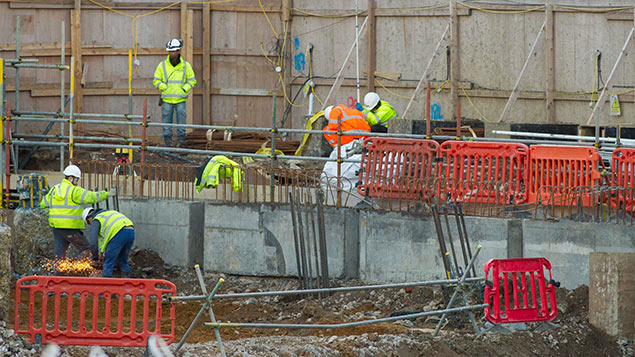 Hundreds and perhaps thousands of workers are at risk of exploitation on many of the UK’s most important infrastructure projects, such as new hospitals, roads, railways and housing developments, a new report by the Chartered Institute of Building (CIOB) has claimed.

The Construction and the Modern Slavery Act report, consisting of evidence from police, lawyers, campaigners and experts in the field, found that business models based on aggressive costing created an environment in which unethical procurement and recruitment practices could occur.

Large publicly known organisations with a high turnover… are being very slack – that’s the most positive spin I can put on it – in human resources recruitment” – Caroline Haughey, barrister

It said there was a tendency for ethical practice to be priced out, leading to supply chains becoming open to exploitation.

Many of the workers had slipped through the net, it said, because employers were mistakenly conflating immigration checks with modern slavery checks. Since the workers were perfectly entitled to work in the UK, this approach was destined to fail.

Writing in the report, CIOB chief executive Chris Blythe, said: “Our business models are normalising hardship, both for individuals and companies. And, whilst these models do not always lead directly to modern slavery, they are creating an environment in which it is easier for exploitation to thrive and criminality to infiltrate
supply chains undetected.”

Which employers are required to publish a slavery and human trafficking statement?

A high number of published statements did not meet minimum legal requirements, such as being visible on the company homepages and being signed off by a board director. It was also alleged that companies often watered down their modern slavery statements to remove mention of risk, something the CIOB said was against the spirit of 2015’s Modern Slavery Act.

A further issue was that major companies were defaulting to legal compliance exercises that transferred responsibility onto less well-resourced suppliers.

Criminal barrister Caroline Haughey has advised on or prosecuted more than 40 defendants in modern slavery cases in England and Wales and is a member of the Government’s modern slavery taskforce. She told the CIOB that there were “large publicly known organisations with a high turnover that are being very slack – that’s the most positive spin I can put on it – in human resources recruitment”.

She added that law enforcement meant taking a more flexible approach than was currently the case: “At the moment the approach is to prosecute the traffickers – the people that are clearly culpable. But, the more we’re doing that, the more we’re discovering industry collaboration with organised crime. It could come from the top of organisation – or from individuals lower down in the company that are collaborating with the slave market.”

Companies needed to change their behaviour to prevent exploitation from occurring. “I want them to show me that they have educated all their staff from top to bottom. Not just to look for trafficking or exploitation issues within their own company, but from the suppliers that they are using. To be aware.”

Haughey acknowledged that construction sites had a high turnover of people, which made them more vulnerable to modern slavery. But she said: “They have a health and safety obligation to know who is on site and when. Basic things like clocking in and clocking out, following where the money is going and checking ID.”

On the subject of modern slavery statements Haughey was certain that more needed to be done. She said: “Public-facing companies are more anxious to do this right. Some large organisations are showing root and branch reform – John Lewis, Marks and Spencer and H&M. But many companies are paying lip service to it.”

Companies that faced up to the problem would be less vulnerable to prosecution, she said: “The law is not prescriptive and nobody’s supply chain is going to be perfect. If you can show that you are proactively working to improve worker protection in your supply chain, you’re less likely to be prosecuted, unless there is direct criminality.”

In 2017, victims of modern slavery and human trafficking in the UK were identified from 116 countries. British citizens were the largest recorded nationality, up from 326 in 2016 to 819 in 2017, according to the Modern Slavery Human Trafficking Unit, although this was largely because of drug and sex trafficking cases involving minors.

Within the adult labour exploitation category, Vietnam, Romania, China and the UK were leading source countries, but several eastern European nations – a major source of recruitment for the UK construction sector – were also high on the list, although data is still developing. Many of those exploited were Commonwealth citizens with full UK working rights, the report states.

Professional networking sites such as LinkedIn, the report noted, inadvertantly provided commonly used methods for luring victims under the guise of headhunting. There have been several cases of British citizens being scammed, Keith Rosser, chair of SAFERjobs, told the report.

He added: “Scammers often pose as genuine recruitment companies or labour agencies. We hear of individuals, often from eastern Europe that have gone through what they thought was a legitimate recruitment company, only to find themselves in a situation where their living and accommodation costs are higher than their wages. So they become stuck, and already owe money to their employer. It’s a common form of entrapment into modern slavery.”