Human capital: How to stop productivity going at a snail’s pace

By Sarah Sweetman on 14 Dec 2017 in Employee engagement, Productivity 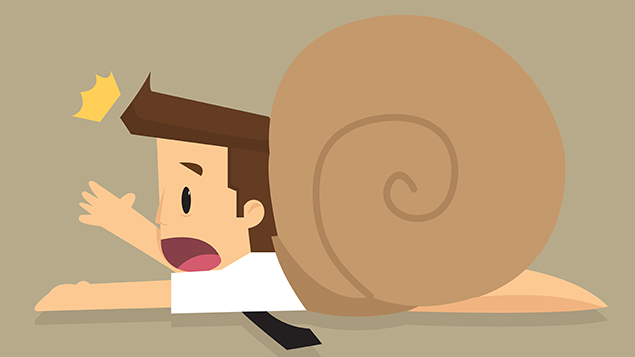 The ONS reports that UK productivity levels lag behind our international partners. How can employers make the most of their human capital to move this forward? Executive coach Sarah Sweetman offers some pointers.

It’s no secret that the UK is suffering from a productivity problem. We are working longer hours than ever, but failing to meet the levels of our European counterparts.

The Office for National Statistics recently reported that labour productivity lagged behind our international partners in 2016. This lower level of productivity was evident across all industries, although the size of the gap varies considerably depending on sector.

Last month’s budget also predicted that the UK economy will only grow by 1.5% this year, compared to earlier predictions of 2%.

Productivity is measured to help determine a country’s long-term performance by measuring the output per person.

Shockingly, our measured output per hour is 18 points lower than the other G7 nations, leaving us far behind our global competition.

While some pundits were quick to blame our membership in the EU, this does not seem to be the case. A recent report from the Centre for European Reform (CER) shows that we are “sluggish and unproductive” – something that is predicted to worsen with Brexit.

The current government focus has been on the need for investment into wide-scale infrastructure in order to narrow this productivity gap, but some experts worry that this is actually masking the real problem.

The real issue? It is clear that UK firms have not been focusing on the true needs of their human capital and how to effectively develop it for the future.

Many UK businesses are currently facing the same set of problems. They are struggling to engage and motivate a “passive jobseeker” workforce that is suffering from spiralling mental health issues and record dissatisfaction levels.

While prioritising workplace systems and overall infrastructure is important, there is something much simpler any firm can do – pay attention to its people.

People in the UK work longer hours than most – according the CMI, three-quarters work 29 extra days a year and one in 10 work the equivalent of an additional three months per year.

Compare this to ultra-productive Germany where average work hours are among the world’s lowest, at 35 per week, and it’s clear that the always-on culture is harming our productivity – not to mention our mental health.

If we are to get out of the quagmire that we find ourselves in, we need to fundamentally re-frame the culture of the modern workplace.

The UK workplace has become mechanistic, dehumanised and uninspiring for so many workers. The command and control model of leadership is not fit for purpose in many organisations.

While the link between leadership and the human element of organisational performance and productivity is so strong it so rarely makes the headlines, eclipsed by the appetite for more technology.

Ironically, we also know that digitisation is threatening many of the human elements of organisational life – reducing dialogue, connection and compassion.

Human capital is one of the most valuable assets in any business – the team of talent that has been put together, trained and worked with is arguably worth far more than any other aspect of the business.

By encouraging employees to build on their own inner leadership qualities and contribute to the wider end goal, then the human capital itself will overcome the productivity gap.

A workplace culture that liberates leaders, empowers and motivates staff to increase productivity is ideal. So, if you’re to be the initiator of change then consider these points:

Understand your employees: There is a shift away from the old ‘job for life’ mantra as digital native employees become the norm. Your employees are more likely to be driven by discovering their own leadership path rather than waiting for a promotion. Help them on this journey.

Walk the talk: Sure, you can tell your employees what you want them to do, but they look to you to model the behaviour. When you lead, your team will follow.

Establish a culture you can all believe in: Efficient employees have a deep emotional connection that goes way beyond a set of strategic values. Finding ways for your employees to establish their own purpose and helping them to align it to that of the organisation is key to fostering a belonging as job satisfaction directly influences productivity.