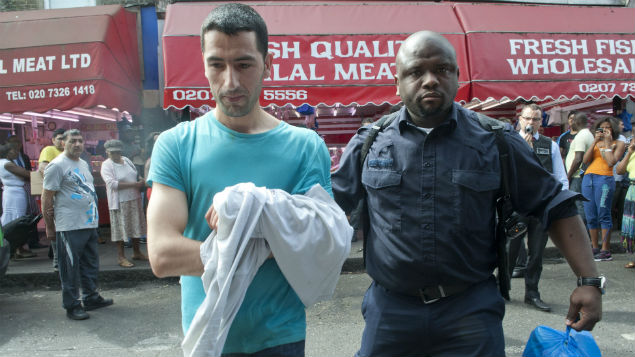 An Iranian man working in London is detained apparently without the right to do so. Photo: Jamie Wiseman/Daily Mail/REX/Shutterstock

In the second half of 2015 alone, the Home Office issued 1,217 illegal working civil penalties to businesses, equating to £21.6 million in fines. Civil penalties have now become a prized revenue stream for the Home Office and, as immigration solicitor Anne Morris explains, it seems as though it is large employers that are increasingly footing the bill.

Corporate HR under the spotlight

When the points-based system for immigration was introduced in 2008, the Home Office initially focused its enforcement efforts on low-hanging fruit, such as restaurants and takeaways.

In recent months, however, we have noticed a growing trend in our caseload of large, respected corporate organisations being targeted by the Home Office for breaches of their immigration duties.

Larger employers may feel confident that their HR systems are fully compliant and that they are not employing anybody illegally. However, these firms are being sought out, and caught out, by the Home Office, and they face fines of up to £20,000 per illegal employee.

Carry out checks on immigration status of TUPE-transferred employees

In addition to the fine, these companies are experiencing other adverse effects, including revoked or downgraded sponsor licences and reputation damage.

The civil penalty regime was created to ensure employers of migrant workers are compliant with immigration rules and that all their personnel have the relevant permissions to work in the UK.

Now, however, it seems civil penalties are not just being issued where somebody is employed illegally.

We are seeing an unprecedented number of civil penalties where employers do not have the relevant paperwork to satisfy their duties under section 15 of the Immigration, Asylum and Nationality Act 2006.

If you hold a sponsor licence to employ workers from outside the European Economic Area (EEA), there are a number of steps you need to take to ensure compliance with your duties and avoid Home Office scrutiny.

If you can prove you have followed the steps for compliance, the statutory defence to challenge or reduce a fine becomes open to you in the event of a civil penalty being issued.

Below is a summary of the main areas of procedural weakness the Home Office is honing in on with larger employers.

You are under a statutory duty to check the correct documentation from your employees to establish their right to work in the UK.

Employees on your payroll can be part time, casual (or any other type), note that this does not include sub-contractors.

The Home Office signalled its willingness to crack down on employers using illegal workers in August 2015. James Brokenshire, the immigration minister, told The Times that illegal migrants working on building sites and in care homes were to be targeted in a wave of raids by immigration officers in the autumn.

The Government focused on three sectors of the economy: construction, care and cleaning.

“Rogue employers who give jobs to illegal migrants are denying work to UK citizens and legal migrants and helping drive down wages,” said Brokenshire.

One of the most public cases of a large employer being penalized for employing illegal workers was when supermarket chain Tesco was fined £115,000 for breaches involving 23 workers in November 2012.

The Daily Telegraph reported that immigration officials swooped on the Tesco.com building in Croydon, south London, and found students of almost a dozen nationalities working longer hours than their visas allowed in the warehouse.

UK Border Agency officials arrested more than 30 of the students for alleged breaches of visa terms that restricted the amount of hours they could work.

The document list has changed over the years, and will continue to to do so. To minimise the risk of non-compliance you must ensure you are working to the most recent requirements, including which documentation to check and what specifically needs to be captured and saved.

For example, a company we recently worked with had a copy of all necessary documentation for one employee, except for the back of the biometric card (which only confirms the person’s gender).

The company was issued a £10,000 fine. We mitigated it down to £7,000, but this was still a notable figure requiring explanation to the board.

Complete copies must be taken of all relevant documents, and the date of inspection recorded.

If, for example, an employee’s passport has been copied but neither signed nor dated, you could be looking at a fine of £10,000.

To mitigate, we recommend carrying out another check of the document and recording the date of the check on file.

Do not backdate – this will cause issues with the Home Office who will say that you should have dated it in the first instance.

Retention of records is another common area of risk. You must keep the copy documents for the duration of the employment and for two years post-termination. Again, the Home Office is penalising employers for failure to retain past records.

You have to take steps to ensure the validity of the documentation and ensure it has been properly examined.

For example, if an employee presents a residence card, and it later transpires there is a spelling mistake on it, the Home Office could allege that adequate checks were not undertaken because you failed to spot that mistake.

Under the legislation you are also required to check and prove that the person is properly employed by you. The risk here is that a person’s visa status can and is likely to change over time.

While an employee may be legal at the beginning of their employment, their leave may at a later stage become invalid, and this is where penalties are being triggered for employers.
Your HR systems and processes should ensure you keep up to date with employees’ visa status during the course of their employment to avoid fines.

The importance of compliant HR processes

Procedural flaws are an easy means by which the Home Office can impose fines for employing individuals, even if an employer did not knowingly employ that person on the basis that they did not have leave to work in the UK.

Non-compliant processes are, however, generally preventable, given the right remedies are put in place and followed across the board. This is where HR should take the lead. Mock audits are also extremely useful in identifying risks and areas for improvement.

Beware, however, internal operational inconsistencies. We see many companies that have one department following a set process to the letter, but other parts that are not. This puts you at risk. You have to ensure that within your business your housekeeping applies right across the board.

The Home Office clearly understands the way to impact business is through financial means. By putting big businesses under the spotlight, the Home Office is capitalising on a substantial source of revenue, as well as supporting its wider aim of reducing the number of sponsor licence holders in the UK by scrutinising employers as par for the course.

If you have effective HR systems in place, there are defences open to you to challenge a civil penalty. But if you have been caught out, it is a financial decision for your company to make as to whether to appeal and mitigate the fine, or accept and pay.

Fundamentally, you want to avoid being issued a civil penalty in the first place. HR teams can do this by identifying where the risks are in your business, and taking steps to manage and resolve them, putting you in the strongest position should the Home Office come calling.