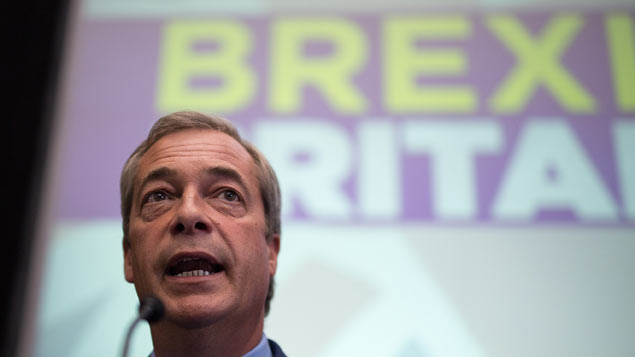 Nigel Farage, who just stepped down as UKIP leader, lobbied against the free movement of people/Joel Goodman/LNP/REX/Shutterstock

As the debate about the free movement of labour post-Brexit rumbles on, Kerry Garcia and Jackie Penlington consider how the UK’s exit from the EU might affect workers from the wider European Economic Area (EEA).

Concerns about increasing migration to the UK seem to have been one of the main reasons why many people voted to leave the EU.

What is the European Economic Area?

However, the extent to which immigration and the free movement of people will be affected by Brexit remains unclear, and largely depends upon the model which the UK Government decides to pursue when negotiating the UK’s exit from the EU.

What is the current position?

EEA nationals (which covers those from the other 27 EU member states as well as from Norway, Iceland and Lichtenstein), together with Swiss nationals, are able to move to the UK for an initial period of three months.

In order to remain beyond that time, EEA nationals must be working, undertaking self-employed activities, be self-sufficient in the UK, or – in certain circumstances – they may be jobseekers or students.

Other than Croatian nationals, they have full access to the UK labour market without restriction and can take any job, whether skilled or unskilled.

After five years in the UK, EEA nationals may automatically qualify for permanent residence and 12 months later they may be able to apply to naturalise as a British citizen.

Those who are already in the UK, or enter in the near future, will continue to have the right of free movement and the right to work until we leave the EU.

What happens in relation to EEA immigration post-Brexit largely depends on the model of trade relationships which the UK decides to adopt and how exit negotiations with the EU proceed.

One possibility could be that the UK negotiates close trade deals with EEA member states without agreeing to freedom of movement or by negotiating reduced free movement, for example by agreeing a cap on the number of EEA migrants who can come to the UK or by only allowing those with confirmed job offers to work here.

At this stage this seems relatively unlikely, as EU leaders have emphasised that freedom of movement is a fundamental principle.

If, however, the UK Government decides to opt for a looser trade relationship with Europe, the UK would have the freedom to make its own immigration laws in relation to EEA nationals.

At present, a points-based system applies to non-EEA nationals. Only skilled workers with a job offer from a licensed sponsor, fulfilling a professional or managerial role, are able to come to the UK to work under the Tier 2 category. There is virtually no scope for non-EEA migrants to come to the UK to undertake low-skilled roles.

In the post-Brexit landscape, if EEA nationals no longer enjoy free movement rights and the Government does not provide any specific provisions for them (for example, allowing them to work in the UK if they have a confirmed job offer) they would then need to qualify under such a points-based system.

This would be bad news for employers relying on talent from the EEA since it would mean a substantial increase in hiring costs.

Currently, the costs of hiring an EEA national are the same as those for a British citizen, but under a points system, employers would pay upfront costs of at least £2,000 to sponsor an individual for a five-year work visa.

These costs are due to rise to at least £7,000 with the introduction of the Immigration Skills Charge in April 2017.

Further, if EEA nationals have to qualify under Tier 2 of the points-based system, it is likely that in many cases employers will only be able to employ them if there is no British national suitable for the role, and will often have to advertise the position first in accordance with strict requirements.

Employers will also need to be registered sponsors and comply with onerous record-keeping and reporting duties.

UK employers will inevitably be concerned that, post-Brexit, there may be insufficient people to undertake the unskilled roles currently fulfilled by EEA nationals, especially in the agricultural, hospitality, catering and healthcare sectors.

In the past, UK employers have been able to recruit in low-skilled occupations, but these schemes were closed due to the availability of EEA workers.

We could see these types of schemes being re-introduced to fill the need for unskilled labour post-Brexit, or alternatively the points-based system could be extended.

How can employers safeguard their workforce?

Employers should encourage any EEA national workers and their families who have been in the UK for at least five years to consider applying for permanent residence.

This will ensure that they have the right to remain here in the event that freedom of movement for EEA citizens ceases when the UK leaves the EU.

We also recommend that EEA nationals seek advice to ensure that they are in the best position to be able to remain here. For example, self-employed individuals must have held comprehensive health insurance in order to qualify for permanent residence.

EEA workers who have been in the UK for less than five years may wish to apply for an EEA Registration Certificate now, to show that they are in the UK exercising the right of freedom of movement.

This may be useful if transitional rules are implemented to allow EEA nationals and their family members who are already in the UK to remain here post-Brexit.

The uncertainty that surrounds Brexit is making it difficult for employers to act decisively. Employers should be thinking ahead as far as possible and reviewing their recruitment needs now, as well as the number of EEA nationals they employ, so they are as prepared as possible for the post-Brexit era.

It is also worth ensuring compliance with sponsor licence obligations, as employers may need a sponsor licence in order to employ EEA, as well as non-EEA nationals, in the future.