Produced by the government-affiliated Behavioural Insights Team, the research examined how 2,325 adults interpreted GPG figures during a randomised, controlled trial.

It looked at how four different ways of presenting gender pay gap figures influenced people’s understanding of them and their perception of three hypothetical retail companies as a result.

Since April 2017, employers with more than 250 staff have been required to publish figures illustrating their gender pay gap on a government website.

Although it was not an official requirement to publish any narrative alongside their figures, many companies opted to offer explanations of the reasons behind their statistics, such as having more men in senior positions or a drop-off in female promotions after women took time out to have a family.

Many also used the narrative as an opportunity to highlight actions they were taking to promote more women and close the differences in average pay.

But it was the way companies presented the figures themselves that occupied this research. The four key methods tested in the trial were:

The GEC found that using coins, in other words showing people a material value rather than a percentage, was the most useful in terms of both influencing their attitude towards companies with high or low GPGs and in their comprehension of the GPG itself.

So an example of this might be: “At Gover Ltd, women make 63p for every £1 that men make, when comparing average wages” (which could be reinforced through coin imagery, as pictured below). When presented in this way, companies with low gaps were rated more positively than those with high ones, the GEC found.

The coin method also delivered the greatest understanding of what the figures represented – participants answered more questions correctly about the hypothetical companies’ GPG reports when the information was presented this way.

“These results mean that, where possible, the GPG should be visually represented as and described to the public in terms of money rather than percentages,” the GEC explains in its report, and this way of representing the figures has already been changed on the government’s GPG viewing site.

The least effective method was the “energy efficiency” style method, which performed less well than simply showing the data as a percentage.

And while it helped to show viewers a benchmark or comparison to enhance their understanding, the report also cautions employers against the risk of “information overload – in which participants disengage with materials because it is too much for them to process”. 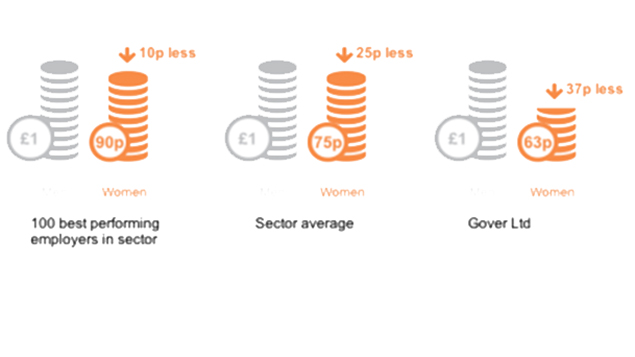 According to Kaammini Chanrai, gender research and policy manager at Business in the Community, getting the communication of gender pay gap information right is crucial for employers trying to attract talent. The charity’s research has shown that 92% of people would use gender pay gap information when looking for a job, while half of female employees would prefer an organisation with a smaller gap.

She says: “If employers cannot communicate their gender pay gap clearly and current or prospective employees cannot understand it, this significantly damages transparency – counteracting what gender pay gap reporting aims to do – and risks a potential loss of female talent.”

“We welcome the report’s recommendations on how to communicate gender pay gaps more clearly, but these also need to be backed up with contextual narratives and clear action plans on how organisations are addressing these gaps and promoting these plans internally and externally.

“This could include regular and transparent performance review and appraisal processes, ensuring opportunities for promotion and training are available to everyone, and making pay and rewards systems equitable and fair. Only then will we create inclusive workplaces that work for everyone.”

What is clear from the report is that making the figures more readable has a strong influence on people’s reaction to them, enhancing the positive and potentially reinforcing the negative. And this has a knock-on effect on  prospective employees’ and customers’ behaviour.

It continues: “Transparency only helps change employer behaviour if people can hold employers to account. This means that the public has to correctly interpret the information they’re given and use it to drive decisions such as what to purchase and where to work.

“The big question we wanted to answer in this research was ‘How should gender pay gap information be presented to drive change effectively?’ We wanted to find a way to present the information in a way that helps the public identify which companies are doing better than others, understand what the figures mean, and hold the right companies to account.”

Stuart Branch, group people and IT director at Weetabix, which presented a 5.4% mean gender pay gap when it published last autumn, agrees that clarity is key if employers expect staff to engage with the issues. Its 2017 report was illustrated through percentages but also included details of how much the gap had reduced, as the company had piloted pay-gap reporting in previous years.

Branch says: “When we presented the results, we didn’t try and hide it amongst lots of detail and we were open with the findings. We’re proud of this and are keen to get our message out about how important it is for us as a business to do the right thing, even when no one is looking.

“We’ve closed it by 3.7% over the past year and in the past five years we’ve been working to make sure gender is not a factor in any decision, including what our colleagues are paid. Ensuring we encourage career progression for all colleagues in our business, regardless of gender, has been and remains at the heart of our leadership team’s agenda.”

A recurring issue when publishing gender pay gap figures was confusion among employees between differences in gender pay and equal pay issues. And this has not gone away, according to Sarah Ashcroft, a solicitor in the employment law team at PwC.

“There remains widespread misunderstanding about what a company’s gender pay gap represents. A gender pay gap does not necessarily indicate an equal pay issue and, in our experience, the publishable figures can be misleading as an employer’s gender pay position is often driven by its demographics rather than pay inequality,” she explains.

“It is therefore crucial for organisations to identify the underlying drivers of any gender pay gap, to enable it to both explain and remedy that gap. Through carrying out additional analysis over and above that required by law, employers will be able to shine a light on the factors contributing to any gender pay disparities and explain to stakeholders the ways in which these will be addressed.”

Ashcroft adds that disclosing as much as is feasible can really benefit employers in terms of conveying their message and setting out how they plan to tackle any inequality. She says: “Simply calculating the mandatory disclosures will not provide organisations with insight or clarity as to underlying issues.

“Only by digging deeper and understanding the root causes of a gender pay gap, which range from gender representation challenges to possible equal pay issues, will employers be able to design and implement an informed action plan to reduce the gap.”

The supporting information is almost more important than the figure itself, as it tells the story of what is being done for the long term” – Mark Goodyer, head of reward, Sodexo

Services company Sodexo used a whole page of its 2017 report to demonstrate the difference between equal pay and the gender pay gap, which attracted positive feedback from both internal and external stakeholders.

Mark Goodyer, director of reward, explains: “Our simple explanation on the variances between gender pay and equal pay were well received both internally and externally. Our whole report places a spotlight on everything we’re focusing on in terms of improving gender pay equality and our broader commitment to gender balance.”

The Sodexo report also includes detail of the gender pay gap across its different entities in the UK, as well as a graphical illustration of gender balance at different levels of the company, and figures on employee engagement.

“We’ve always felt very passionately that the number is just the starting point,” adds Goodyer. “The supporting information is almost more important than the figure itself, as it tells the story of what is being done to reduce the number for the long term.”

As employers review their strategies for this year’s round of pay gap reporting and begin to prepare for next April’s deadline, the GEC’s research will make for interesting reading.

Employment regs: what happened to the ones that got away?

CIPD Festival of Work: ‘Businesses will fail if...