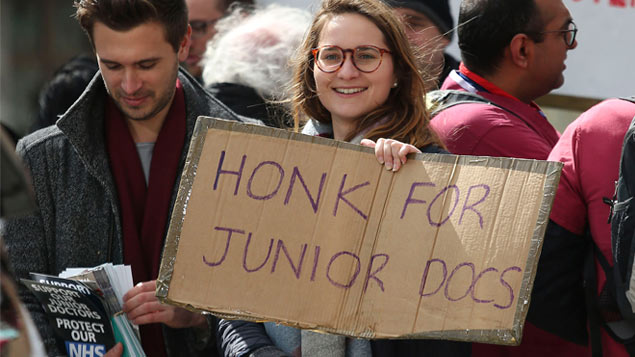 NHS junior doctors have accepted a deal which will see annual pay increases of 2% for four years, ending the four-year long dispute that saw mass walkouts.

Four in five (82%) of the British Medical Association (BMA) members who voted in a referendum on the changes to contracts for junior doctors in England supported the new agreement.

The new contract includes increases to rates of pay for weekend and shifts ending after midnight; an additional £1,000 a year for trainees not on full-time contracts; new and increased penalties for employers when trainees work beyond safety limits; and an 8.2% pay rise over four years.

About 39,000 junior doctors in England will benefit from the deal, which covers the period from April 2019 to March 2023.

Dr Jeeves Wijesuriya, chairman of the BMA junior doctors committee, said: “This vote indicates that junior doctors recognise not only the major victories the BMA has secured – for example, enhanced shared parental leave for trainees and extra funding for rest and fatigue facilities around the country; but that through a new collaborative, constructive negotiation process that has learned from the mistakes of the past, we have made major strides towards a better future for all junior doctors.”

“I am delighted that we have successfully brought to an end the junior doctors dispute with this landmark agreement. Junior doctors overwhelmingly backed our multi-year deal which recognises their dedication to patients and our nation’s health,” he said.

However campaign group The Doctors’ Association UK said junior doctors were “worth far more than this deal”.

“This contract offers nothing to redress the loss of more than 20% in pay over the last 10 years and it will do little to improve the failing morale of the junior doctor workforce,” it said in a statement.

A fresh pay offer for health workers in Northern Ireland, who have been on strike for almost two weeks, has been rejected by unions.