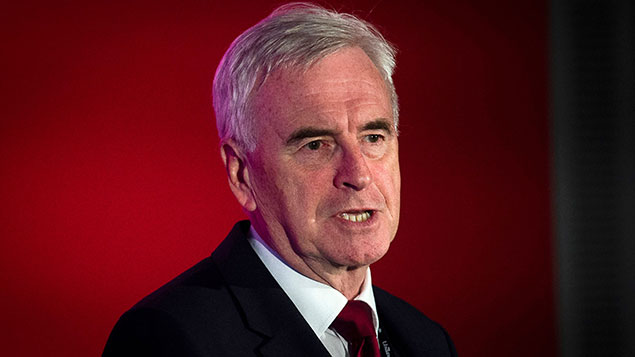 A future Labour government would require all companies with 250 or more employees to give shares to their workers worth up to £500 a year each, shadow chancellor John McDonnell will confirm in a speech at the party’s conference today.

The creation of “inclusive ownership funds” would represent an “irreversible shift in wealth power in favour of working people,” he will say. The system would help reverse the effects of stagnant pay and inequality between senior employees and other staff, McDonnell will add.

Under the plan, firms would have to put at least 1% of their shares into the fund every year up to a maximum of 10%. Employees would receive the first £500 of any rise in share prices with the remainder being used as a “social dividend” to be spent on public services by the government. The latter will be used to help the public sector, whose staff will not benefit directly from the scheme.

McDonnell will tell delegates in Liverpool today: “Workers, who create the wealth of a company should share in its ownership and, yes, in the returns that it makes.

“The dividend payments workers will receive will be up to £500 a year. That’s 11 million workers each with a greater say, and a greater stake, in the rewards of their labour.”

McDonnell’s aides, fleshing out the plans, said that the payouts would only be made as the stock market rose.

The shadow chancellor will say that the shares should be “managed collectively by the workers” and deliver the “same rights to have a say over the direction of their company”.

The estimate of reaching and exceeding the £500 cap for workers’ dividends was tied to companies’ past and expected performance, the aides revealed.

It is thought that the funds would be held and managed collectively, with the selling or trading of shareholdings being prohibited.

The system would some similarities to that operated by employee-owned retailer John Lewis and various other UK firms. Under the John Lewis Partnership‘s employee ownership model, employees are partners and profits flow to them in the form of the annual bonus.

According to the Employee Ownership Association there are more than 100 UK companies with significant employee ownership with other examples including jam-maker Wilkin & Sons, polymers manufacturer Scott Bader and Blackwell bookshops.

Under the plans, workers’ fund representatives would have voting rights in companies’ decision-making processes in the same way as other shareholders.

Labour believes that 40% of the UK’s private sector workforce, about 11 million people, would be covered by the inclusive share scheme.

The scheme was among those recommended by think-tank the New Economics Foundation (NEF), which recommends an inclusive share fund in its document Co-Ops Unleashed. It points out that the system may not appear as unfamiliar to it critics in the Conservative Party as might be presumed: “In a world that presumes companies are owned privately or by distant shareholders, this [inclusive ownership fund] may sound far-fetched. And yet even in the US (and for a while under Thatcherite privatisation in the UK), through Employee Stock Ownership Plans (ESOPs) workers can be rewarded in the form of shares which are transferable and held in an ESOP trust until the worker retires.”

Andrew Pendleton, principal director, policy & advocacy at NEF, said: “The key difference between our plan and ESOPs is that the inclusive ownership fund would be collective as opposed to individual. The importance of collective is you lock those assets in for the long term and workers gain a statutory say.”

He added: “This is a mild way of addressing some of that concern that’s bubbled up against globalisation in the UK. This isn’t anti-capitalist, it’s just trying to spread the benefits of ownership to wider group of people… all politicians need to get to grips with this.” He cited the John Lewis model and said that it was important to give employees a closer relationship with the fortunes of their firm. “Mutual fate is key … these proposals give workers more control but also a greater sense of responsibility. Evidence suggests productivity and profit have better outcomes with these sort of schemes in place.”

The conference has already signalled that a Labour government would seek to ensure company boards had worker representation and that firms would have a responsibility to provide 10 days’ leave for victims of domestic violence.

Reaction to Labour’s plans from employers’ bodies has been negative with the CBI telling the BBC that Labour’s “diktat” would “encourage investors to pack their bags”.

Liz Truss, chief secretary to the Treasury, said: “It would make it harder for local businesses to take on staff and pay them a good wage.”

In 2013, the coalition government introduced “employee-shareholder” employment status, whereby the company must give shares with a minimum value of £2,000 in the employer’s company. From December 2016, the tax benefits associated with the employee shareholder status were closed to new entrants, and the government has said it would abolish the employment status to new entrants at the “next legislative opportunity”.