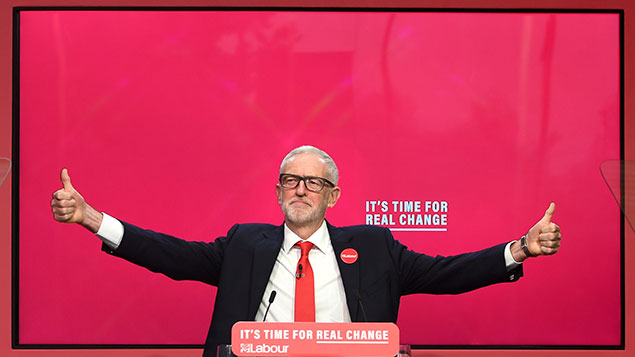 Jeremy Corbyn this morning promised to “unleash a record investment blitz, getting the economy moving in every corner of our country” as he launched Labour’s 2019 general election manifesto, which he told journalists provided the “radical answers” needed for the UK.

The document includes a raft a measures designed to eradicate in-work poverty, promote equality in the workplace and encourage businesses to take a more long-term approach by amending the Companies Act.

It accuses the Conservative government of inflicting “injustice after injustice on women, [BAME] and LGBT+ communities and disabled people” noting that more than “85% of the burden of Tory/Lib Dem cuts has fallen on the shoulders of women”. It pledges to create a Department of Women and Equalities with a full-time secretary of state responsible for implementing new laws to deliver a “fairer society for women and all under-represented groups”.

It says it will make the state responsible for enforcing equal pay legislation through a new Workers’ Protection Agency, working closely with the HMRC. “Women will no longer be left to take enforcement action by themselves through the courts,” it says.

All employers with more than 250 employees will have to “obtain government certification on gender equality or face further auditing and fines”.

On migration Labour says it will scrap the 2014 Immigration Act and restore the overseas domestic workers’ visa. Freedom of movement will continue if the result of a further referendum see the UK remain in the EU.

The manifesto includes a pledge to extend the powers of employment tribunals and to introduce labour courts with a “stronger role for people with industrial experience on panels”.

Short-termism and corporate greed is identified as a particular threat in the manifesto with Labour vowing to make sure good businesses are rewarded, not undercut. It says: “We will amend the Companies Act, requiring companies to prioritise long-term growth while strengthening protections for stakeholders, including smaller suppliers and pension funds.”

Interestingly it advocates action to increase social justice, not social mobility. The latter, it states, is not for everyone and promotes the idea that “poverty and inequality are acceptable provided some people can climb the social ladder” whereas social justice is for all.

Another body the party wants to set up is a Working Time Commission to advise on raising minimum holiday entitlements and reducing maximum weekly working time. It will end the opt-out provision for the EU Working Time Directive and will enforce working time regulations.

On income tax the party pledges to “ask those who earn more than £80,000 a year to pay a little more income tax, while freezing National Insurance and income tax rates for everyone else”.

In an initial response the Institute of Directors told Personnel Today that Labour’s approach risked “too much stick and not enough carrot for business”.

Edwin Morgan, director of Policy at the Institute, said: “The vast majority of business leaders are on board with Labour’s ambitions of tackling climate change and injecting dynamism to all parts of the country. The next government must tap this resource, not alienate it. While new investment in infrastructure and the green economy is welcome, taken as a whole Labour’s measures on business risk being too much stick and not enough carrot.

“Labour’s plans to boost prosperity nationwide by improving local support for growing enterprises, expanding the Apprenticeship Levy, and removing quarterly reporting requirements for small firms will sit well with business leaders. But many directors will have reservations that Labour’s state-first plans for the economy could crowd out rather than crowd in private enterprise.

“Labour’s approach on corporate governance is frequently insightful but almost always one-sided. It’s absolutely right for Labour to seek improvement to how British businesses are run, and to look abroad for new policy ideas. But attempts to reform UK corporate governance must start from the recognition that our present system is an asset to the economy, and is admired and imitated throughout the world. They can’t continue to ignore the clear potential downsides of headline policies such as Inclusive Ownership Funds.”