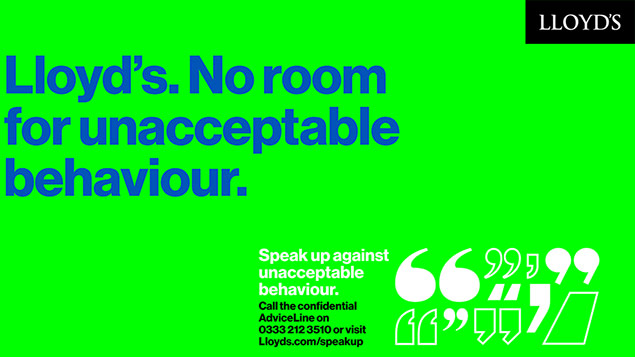 Lloyd’s of London has launched an advertising campaign to encourage workers to speak up against unacceptable behaviour, after a survey found that one in 12 workers at the insurance market had witnessed sexual harassment.

Sexual harassment and the City: change is in the air

The campaign highlights the importance of speaking up and provides guidance on how individuals can take action if they see or experience unacceptable behaviour.

High-impact advertisements, banners, and vinyl posters will feature prominently in the Lloyd’s building in London, together with online resources and a 24/7 advice line. Ads will also be displayed in City pubs and cafés popular with brokers and underwriters.

The SpeakUp web page reads: “At Lloyd’s, three standards of Business Conduct underpin everything we do: act with integrity, be respectful and inclusive and always speak up.

“We know that speaking up isn’t always easy, but if you see unacceptable behaviour, it is absolutely essential.”

SpeakUp seeks to directly address Lloyd’s research which found that 38% of respondents did not know who to raise concerns with in the Lloyd’s market and only 45% of people felt comfortable enough to raise a concern.

Lloyd’s chief executive John Neal said: “At Lloyd’s we expect all market participants to act with integrity, be respectful and always speak up. I hope this campaign encourages more people to do so. You will be heard, you will be supported and we will act, because no matter what form it takes, harassment is never acceptable.

“The ambition here is to make a positive difference in many people’s lives, by empowering individuals to act and intervene when they witness unacceptable behaviour. I think everyone has a role to play. Lloyd’s leadership is fully committed to transforming the culture at Lloyd’s with shared values that will shape the behaviours, choices and actions of everyone in the marketplace.”

You will be heard, you will be supported and we will act, because no matter what form it takes, harassment is never acceptable” – John Neal, Lloyd’s

Bloomsberg Businessweek began highlighting incidences of sexual harassment and bad behaviour at Lloyd’s in March, when an article claimed the 330-year-old insurance market was the “most archaic corner left in global finance”.

In one incident, as reported by Bloomberg, a senior broker sent an email to several colleagues referring to bringing in birthday doughnuts and making a sexual reference to a female employee mentioned by name.

She responded: “This is absolutely unacceptable… There are limits to ‘jokes’ you can send at work copying in all colleagues – this is extremely rude and offensive. Please note that this will be forwarded to HR – HAPPY BIRTHDAY.”