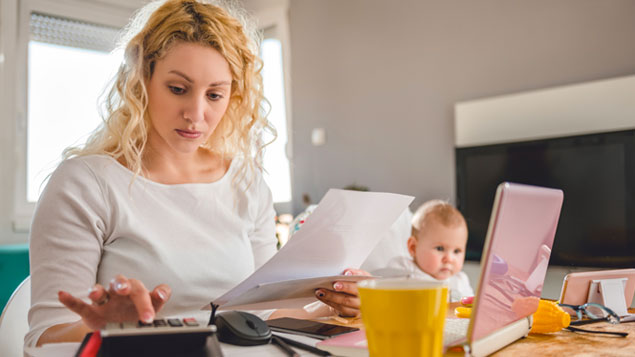 Families with two parents working full time at the national living wage are 11% (£49 per week) short of the income needed to afford an acceptable standard of living, it has been claimed.

The Child Poverty Action Group (CPAG) found that the wages of full-time low earners are still insufficient to meet their families’ needs, partly due to any “modest” wage increases being “clawed back” by the freezing of tax credits.

Single parents face a particular struggle to cover their living costs. CPAG found even those on median earnings were 15% (£56 per week) short, while a single parent working full time earning the national living wage will face a 20% (£74 per week) shortfall.

The minimum income standard is calculated by calculated by specifying baskets of goods and services – including food, clothes and shelter – required to meet a minimum “socially acceptable” standard of living in the UK. It differs depending on the size of the household.

Families with three or more children might struggle to make ends meet following the introduction of the two-child limit on claiming child tax credit and universal credit, CPAG said. Affected families will receive nearly £2,800 less a year for each third and subsequent child born after 1 April 2017.

Alison Garnham, chief executive of CPAG, said: “Today, the majority of children growing up in poverty have working parents.

“While the number of parents in work is increasing, income from work alone is not sufficient to enable some to meet their families’ needs or escape poverty and the cost of a child is substantial.

“There is strong public support for government topping up the wages of low-paid parents and investing in children is the best long-term investment we can make.”

For parents who work full time, childcare costs (estimated at £80,000 over the course of the childhood) represented around half the average cost of bringing up a child – £150,753 for a couple and £183,335 for a lone parent.

CPAG’s The Cost of a Child in 2018 research, which was carried out with Loughborough University, noted that the government’s attempt to relieve financial strain by offering 30 hours of free early years childcare for many families did not work.

According to the Family and Childcare Trust, there are not enough 30-hour places to cover all working families in half of local authorities.

Professor Donald Hirsch, the report’s author, said: “Some families who work full time, but on low pay, are relatively well-positioned to gain from a higher minimum wage and selective improvements in help with childcare. However, families with fewer working hours find it hard to access this help.

“This exceptionally harsh regime has been caused by the breaking of the relationship between family entitlements and family needs, under arbitrary cuts that leave some families close to destitution.”

Jatin Patel, social mobility manager at KPMG UK, said the report highlighted the importance of paying the “real” Living Wage, which is independently calculated by the Living Wage Foundation, to lift people out of poverty.

He said: “With the cost of living higher than it’s ever been, we as employers can take active steps to address this by paying the real Living Wage [£8.75 per hour and £10.20 in London].

“This also delivers tangible business benefits. In our own firm and supply chain it has improved staff morale, driven a rise in service standards, improved the retention of staff, and increased our productivity.

“It may not be possible or practical for everyone, but all organisations need to do what they can to address the problem of low pay.”