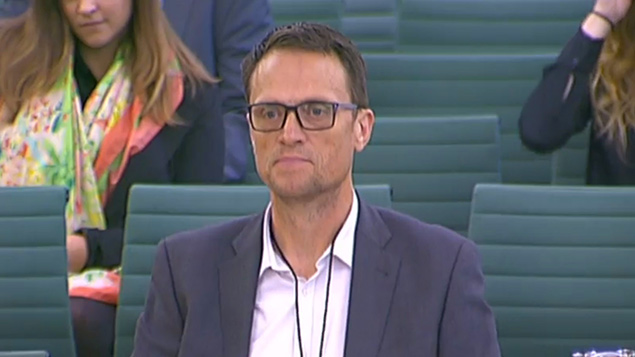 The Business, Energy and Industrial Strategy Committee and the Work and Pensions Committee had invited Taylor, who is chief executive of the RSA, to probe various recommendations he made in his review, published in July.

The MPs also examined his recommendations to apply minimum wage piece-rate legislation to on-demand working, to apply a premium minimum wage rate for non-contracted hours, and the issue of substitution in relation to employment status. Representatives from Uber, Deliveroo and Hermes gave evidence to the committees the previous day.

Taylor began by relaying an idea from Sir David Metcalf, director of labour market enforcement, which he had heard since the review. “We should think hard about the idea that liability for non-compliance within a labour supply chain should go up to the primary contractor, to the top of that supply chain,” he said.

Joint liability at the top of the labour supply chain would be an important way of addressing problems further down, said Taylor as he shared an example of a road haulage company, which was run by a couple of “cowboys”. It had encouraged all its drivers to be self-employed. When the company then went bust, the owners “ran off” with the money.

“These drivers, not only did they lose their job, but they then found themselves pursued by HMRC because they had clearly not been paying the tax they ought to pay,” he explained.

“The question I want to ask is, who were they delivering for? Whose goods were in those lorries? Arguably the idea of joint liability would have meant that the companies at the top of that tree, which might be major brands, would have wanted to make sure that that kind of practice wasn’t taking place at the bottom of the supply chain.”

Rachel Reeves, chair of the BEIS committee, explored Taylor’s recommendation of a higher minimum wage rate for hours not guaranteed in an employee’s terms and conditions.

Taylor said this recommendation was one of the most debated areas of the review among his co-authors and highlighted that the issue related not just to zero hours but to “low hour” contracts.

“There are some very large companies in the country now who put people on four or five hour contracts when they customarily expect them to work 30, 35 hours a week,” said Taylor. “There are problems associated with that practice in terms of people’s security, their ability to get a mortgage or a loan.

“If you’re on a zero or low hours contract, one of the other things is that you feel that if you ever complain about your conditions or raise a concern that you are a worker rather than employee then your hours can simply be withdrawn from you and you have no redress.”

Taylor explained that he has realised since the review that the idea of a higher minimum wage rate for non-contracted hours already exists in Australia and the US.

He felt the benefits would be twofold: “On the one hand it might lead to slightly more money in the pockets of people on the minimum wage, but secondly, more importantly, it is a nudge to encourage employers to think more imaginatively about whether or not they can restructure their work in order to guarantee people more hours.

“We’ve seen some employers like McDonald’s take initiatives to precisely make that offer to their staff, so it’s a nudge to say, could you do a little bit more to make sure the flexibility is genuinely two way?”

Taylor suggested a two or three-year pilot to examine the impact of such an intervention, but he also called on employers to make better use of technology to make the system fairer. “This moment is such an important moment for us because I believe that technology can be used to really improve the quality of people’s lives and provide genuine two-way flexibility.”

Reeves then examined Taylor’s proposals to use piece rate rules for people working for the likes of Uber, Deliveroo and Hermes. She explained that she, Frank Field – chair of the Work and Pensions Committee – and others on the panel, had cause for concern that it could mean more people being paid under the minimum wage.

“We didn’t argue for piece rate to be applied to people in general,” said Taylor. “We argued for a very specific solution to a very specific problem… [where what] people like Uber drivers and Deliveroo couriers value is the capacity to work on demand, to work whenever they want to work.”

He explained that such companies claim that you can work on demand. “This is very different from the situation that appertains to nearly every other form of employment. I can’t just rock up to a strawberry farm in February and say I want to pick strawberries.”

Given that the drivers like working on demand, what would happen in a world in which those people are classified as workers, as Taylor believes they ought to be?

“You have a real conundrum there,” he added explaining that people could log on in the middle of the night when there isn’t much work, but still expect the guaranteed minimum wage.

“So the companies argue that, were they to have to pay minimum wage, they would then have to move to a shift system. And as I say it’s clear that most Uber drivers and Deliveroo couriers don’t want to work shifts, they like the on-demand situation.”

Taylor recommended that if the following three conditions applied, those workers would not be able to make a minimum wage claim, even if they had been paid less than the minimum wage:

“In my view, if you are a student in Ipswich on a Monday afternoon, and you go on to the Deliveroo app and it says you’re probably only going to earn £4.50 an hour because not a lot of people want pizzas, [and you] do a crossword or whatever because actually £4.50 is better than nothing, [then] as long as Deliveroo is paying the average worker who works averagely hard well in excess of the minimum wage,  I don’t think you should be banned from doing that.”

Reeves, however, was unconvinced, describing the move as a slippery slope and comparing it to proposals for people with disability to be able to be paid a lower rate of the minimum wage. “I think there is a very real risk when you go down this route, even with the best of intentions, that it could result in more people being paid less than a wage that frankly they could afford to live on,” she said.

Field said the Government had been clear in its response to the Taylor review that the minimum building block is the national minimum wage and that they’re not prepared to consider exceptions to it.

But Taylor stressed that there were already exceptions to it in the realm of piece work. “That principle does exist. We explored the idea of applying that principle to the very specific circumstances of on-demand work and I would say to you, I completely agree, this would not work without complete transparency.”

it was pity that when you heard from the companies that you heard from that you didn’t also hear from companies who do very similar things, but are respecting workers’ rights and are paying employment taxes, because they will argue I am sure if you speak to them that their model is becoming increasingly tenuous.”

The previous day, Hugo Martin, director of external affairs at Hermes, said it pays couriers on a per-parcel basis which provides an incentive for good performance. If this is believed to fall below the minimum, drivers can ask for a rate review. When asked if Hermes could categorically say it paid everyone minimum wage, he said this was difficult because couriers don’t work to a set time (eg. four hours a morning) but an agreed number of parcels.

Referring to numerous court cases regarding employment status, Taylor said he felt that the courts were doing too much and legislation too little. “I think there are a couple of things that could potentially be done without having to redefine as a whole those categories,” he said.

“I believe that substitution is used inappropriately as the factor which enables some employers to say that people are self-employed rather than workers.

“I don’t think the fact that you can get someone else to do your round – often an entitlement that is notional – changes the fact that when you are doing your round you are being effectively ’employed’ by the company.”

Taylor added that it was important to recognise that a lot of what goes on in this area is to do with different business models competing against each other. “Sometimes we understand this issue as kind of workers’ rights vs business and employers. Actually what is often happening is that there are businesses that are treating their workers well and paying employment taxes who are finding it incredibly hard to compete with companies who have found ways to avoid respecting workers’ rights and paying business taxes.

“In a sense it was a pity that when you heard from these companies, that you didn’t also hear from companies who do very similar things, but are respecting workers’ rights and are paying employment taxes, because they will argue I am sure if you speak to them that their model is becoming increasingly tenuous.”

Taylor gave an example of somebody who runs a firm which enables people to provide call centre services from home. They have blue-chip clients. People can work when they have a few hours free at home, sit at their kitchen table and they can take calls on behalf of major organisations. Similar to platforms like Uber, the firm has surge pricing so you can choose to work at certain hours when you would earn slightly more.

This company treats its people as workers, he explained. It gives them workers’ rights and it pays employment taxes. But the person who set up this company told Taylor: “My business model is increasingly under threat because I am facing competitors who claim that people, who are doing exactly the same work, are not workers, are not entitled to employment protection, and are self-employed and are therefore will not subject to employment taxes.”

Taylor warned the committees that there had to be a level playing field. “Lots of technology can provide really good opportunities for new forms of flexibility, for new forms of work, to carry on a very good record we’ve got in this country of creating flexible work for people throughout the life’s course. If we get it wrong, there’s a genuine danger of a race to the bottom.”