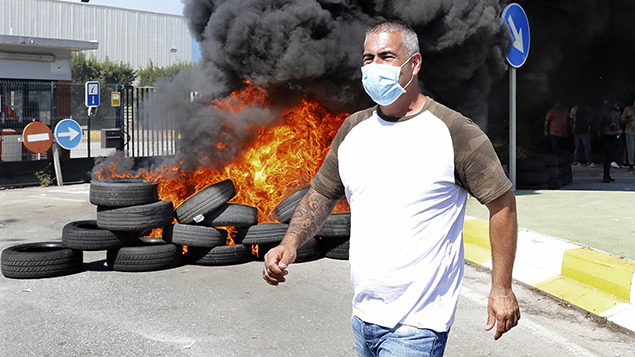 Protests erupt outside a plant which Nissan announced will close in Spain. Photo: Andreu Dalmau/EPA-EFE/Shutterstock

Hundreds of Spanish Nissan workers have burnt tyres outside a factory that the Japanese car maker has announced is to close, while the UK’s Sunderland plant will stay open.

Global restructuring in reaction to the coronavirus crisis has led Nissan to reduce global production capacity by 20% to 5.4 million vehicles per year. A facility in Indonesia will also cease manufacturing.

Nissan chief executive Makoto Uchida said the company would continue to run its Sunderland factory, which employs 7,000 people. Production will recommence next month after being suspended because of Covid-19.

He said: “Our transformation plan aims to ensure steady growth instead of excessive sales expansion. We will now concentrate on our core competencies and enhancing the quality of our business, while maintaining financial discipline and focusing on net revenue per unit to achieve profitability. This coincides with the restoration of a culture defined by ‘Nissan-ness’ for a new era.”

Uchida described the decision to close the 3,000-employee Barcelona plant as “very difficult”. More than 20,000 jobs are thought to be indirectly affected.

Angry workers blocked roads and burned tyres outside the plant on the Zona Franca industrial estate. “They’ve left us to die,” said Juan Carlos Vicente, the works council president, after a meeting with the company.

The Spanish government said it “laments” Nissan’s decision, and has proposed a working group to find alternatives

Nissan’s survival plan, includes reducing the number of models it manufactures worldwide from 69 to 55 and it follows a new strategy announced with its partners Renault and Mitsubishi to work more closely to share production, designs, and technologies.

Steve Bush, Unite’s national officer for automotive, said the union continues to push for sector-level assistance from government in these unprecedented times and said that the Spanish closure was a “regrettable reminder” of the challenges faced by the car industry.

He added: “We are seeking clear assurances from Nissan that the cost-cutting measures spoken about will not impact on our members’ jobs, terms and conditions or other benefits at Europe’s most efficient plant, Sunderland.

“We have made it clear to Nissan that any attempt to do this will be fought by the union and a loyal, world-class workforce. There needs to be a full consultation with Unite to ensure that any rationalisation or restructuring of the business is done in a way that protects jobs and the financial security of our members as well as the long-term future of the plant.”

Nissan’s alliance partner Renault has today announced 15,000 job cuts worldwide including 4,600 in France and, earlier this week, UK sports carmaker McLaren revealed plans to cut nearly a third of its workforce, around 1,200 people, mainly in the UK.