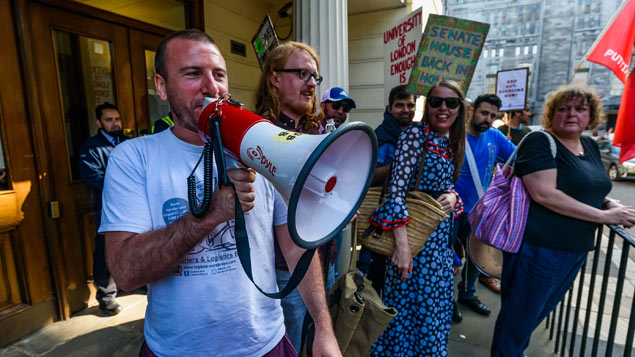 Last month the High Court dismissed a case which claimed outsourced workers should be able to negotiate pay and conditions for the organisations they work for. Tom Long looks at what impact the case could have had, had it been successful.

The High Court’s recent ruling against the Independent Workers Union of Great Britain (IWGB) in its bold push for outsourced workers to be allowed collective bargaining powers has been met with a mixed reaction. If the IWGB’s wishes had been granted, the world of outsourcing – and employment in general – could have been drastically altered. So, what is collective bargaining and why was the case potentially ground-breaking?

Can an employer refuse to disclose information to the union for the purposes of collective bargaining?

As a relatively new trade union, the IWGB has certainly made its mark through this case. Its aim was to gain the right to collectively bargain on behalf of its members who work at the University of London.

Although its members work at the university, they are actually employed by Cordant – an outsourcing company. Cordant did not wish to voluntarily recognise the IWGB, and its request for compulsory recognition was blocked due to Cordant already having an existing voluntary recognition agreement in place with Unison. According to legislation, it is possible for multiple unions to be recognised on a voluntary basis, but statutory recognition will only be granted where there is no existing recognition of a trade union for the relevant bargaining unit of workers.

The IWGB also sought recognition directly from the University of London. This is the critical part of the case, as it had not been attempted by a trade union before. The union argued that as the university indirectly controlled the terms and conditions of its members’ employment, it should allow the union to collectively bargain with it on behalf of its members.

Collective bargaining is when a union is recognised by an employer for the purposes of negotiation and consultation, meaning employers will sit down with a trade union to negotiate the terms of its members’ contracts and other agreed issues. Only employers are obliged to do this, which is where the IWGB ran into problems -the university is not the employer of the IWGB’s members, meaning they had no obligation to agree to collectively bargain with the union.

Statutory recognition schemes for unions only require bargaining on three things: pay, hours and annual leave. However, although the surface impact seems limited, workers are likely to be in a stronger position after collective negotiations. Acting together often gets better results than acting individually, the essential basis of trade unions, and this is why the IWGB wished to gain collective bargaining rights.

Some outsourcers of work believe using such workers means they have little responsibility for their welfare or treatment, but they are often still representing the outsourcer’s organisation and their morale is important to the wider business.”

The IWGB argued before the High Court that article 11 of the European Convention of Human Rights was being breached through being denied the ability to collectively bargain, specifically the right to freedom of association. However, the judge ruled that this right was not being infringed as there was nothing stopping the IWGB from applying for voluntary recognition.

Even if there was an infringement of article 11, this would have been justified by the need to protect the rights and freedoms of others, namely Cordant, Unison and those workers in the bargaining unit covered by the existing voluntary arrangements.

If the union had been successful, the concept of outsourcing labour could have been undermined significantly. Outsourcing agreements are usually used to save on costs and management time, but if outsourcers of work were required to recognise trade unions for their outsourced staff then the cost benefit would be dramatically reduced. This might result in little, if any, employment cost savings from outsourcing staff to a third party.

The IWGB may have lost its case, but that is not to say the fight was not worth it – awareness has been raised surrounding the treatment of outsourced workers. Some outsourcers of work believe using such workers means they have little responsibility for their welfare or treatment, but they are often still representing the outsourcer’s organisation and their morale is important to the wider business.

Companies are moving towards new ways of employment, with the traditional model of employee and employer gradually fracturing and evolving. People work side-by-side, no matter who they are employed by or what their role is. The most important thing is that all staff remain motivated and are treated in a fair and reasonable manner.

This case could have been revolutionary, and in a way it still is. It is the first time this type of action has occurred, and the IWGB may test the law further. However, the legislation surrounding collective bargaining is clear and the ruling is unlikely to change. Nevertheless, it shines a light on the limitations of outsourced workers’ conditions and may be an important first step in the move towards future changes.