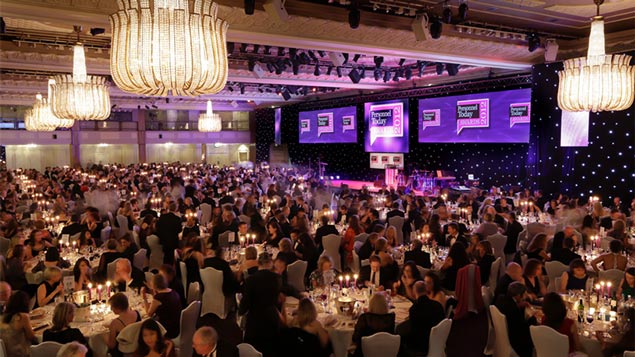 Guests take their seats at a previous PT Awards

The deadline for entries to the Personnel Today Awards 2014 has been extended by one week to 20 June 2014.

Rob Moss, editor of Personnel Today, said: “We’ve had a great response from the profession for the 2014 awards, with more entries than at the same time last year.

“As in previous years we’ve extended the deadline by one week, but thought we’d make this decision a little earlier to give entrants the chance to make the finishing touches.”

Two exciting new categories join the line-up this year as the longest-running awards for the HR profession are broadened to recognise HR consultancies.

If you and your HR colleagues have led an innovative project, driven down costs, been courageous in implementing change or achieved great results in the past 18 months, then you could be a winner of one of our coveted awards, which will be presented at a glittering ceremony at the Grosvenor House Hotel on London’s Park Lane on 18 November 2014.

New for 2014, the Consultancy of the Year Award will recognise the achievements of a team of consultants or an individual consultant. It can be a general HR consultancy or one that focuses on an HR specialism.

Our second new award is the HR Supplier Partnership Award, which aims to recognise a supplier to the HR profession that has gone the extra mile through the quality of their products and services. Suppliers must be nominated by other Personnel Today Awards entrants.

Full details of both the new awards are on the categories page.

Two long-standing and highly competitive categories are being separated into awards for larger and smaller organisations. The Learning & Development Award and Employee Engagement Award will now welcome entries to two sub-categories – one for organisations with more than 1,000 employees, and one for those with less than 1000.

Last year, Barclays walked away with the coveted gold trophy after being judged overall winner, following its triumph in the Youth Employment Initiative category.

See highlights of the 2013 Awards and a full list of winners.

Each category is independently judged by well-respected industry figures. Judging begins after the new entry deadline of 20 June 2014 and category shortlists are announced in August. Nominated suppliers will be invited to enter.

All shortlisted teams are invited to attend a pre-awards drinks party in September, as well as the dazzling awards ceremony on 18 November. Previous guest hosts have included Alexander Armstrong, Hugh Dennis, Jack Dee and Rob Brydon.