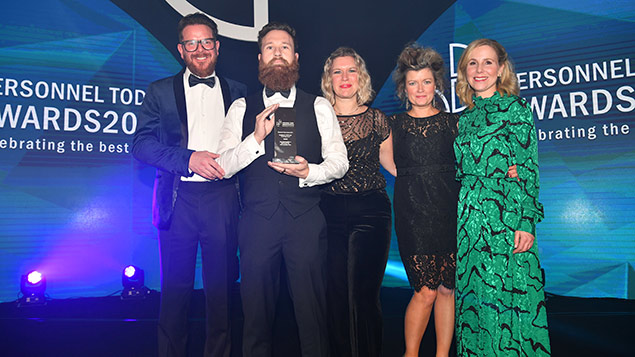 University Hospitals of Morecambe Bay NHS Foundation Trust collected the Excellence in HR through Technology Award for its centralised “Ask Sami” HR hub which has improved efficiency and freed-up more time for managers to dedicate to patient care. We look at its winning entry and celebrate the achievements of those also shortlisted in this category.

As a result of a review into the way care is delivered across South Cumbria and North Lancashire, the University Hospitals of Morecambe Bay NHS Foundation Trust has seen an increase to staff numbers, coupled with the need for a 35% cost reduction over three years. On top of these challenges, the Workforce team was managing poor performance, high staff turnover and saw a lack of collaborative working.

To help meet employees’ needs and relieve some of the pressure on the Workforce team, it introduced a centralised HR hub called Ask Sami – the Staff and Management Information Service – as the first point of contact for all HR queries. It offers online 24/7 support, guidance and training for staff and managers, personalised same-day resolution and specialist support through a triage centre.

Its Workforce intranet has been rebranded as the Ask Sami hub and e-learning resources and videos to accompany policies, procedures, guidance notes and templates have been added to the system to help support and upskill managers at a time that suits them and the demands of their roles.

Since Ask Sami was introduced in January 2017 more than 10,000 queries have been resolved. It receives an average of 600 queries per month, 97% of which resolved within one working day.

Managers report that they save around an hour per week through using Ask Sami, which is time put back into patient care or employee development.

After reducing its 54 retail HR managers to 14, food retailer Iceland needed a brand new HR system that would enable the smaller team to continue to support the business effectively. Its in-house time and attendance and personnel system, which provided only basic reporting, was no longer suitable.

The company set out to find a system that would build organisational capability, maintain its “feels like family” culture, offer value for money, aid modernisation and improve efficiency. This led it to HR consultancy AdviserPlus, which implemented a fully integrated HR suite.

It introduced a case management system configured specifically to Iceland’s policies and procedures, which has enabled simpler interaction with managers and a full audit trail. In addition there is a management information dashboard that has allowed the team to highlight HR trends and share insights with business leaders. A bespoke HR dashboard was also introduced, giving the team oversight of staff turnover, absence management, employee performance and “heat maps” of activity.

For staff, a self-service “MyHR” website was launched, which automatically detects whether the user is a line manager or not and tailors the content to them. The site also has a chatbot that can create new cases to be followed up by the HR team.

Finally an e-learning platform was rolled out, offering content ranging from GDPR to food safety.

Since the systems were introduced, Iceland has realised £210,500 in savings with a further £854,000 anticipated in the next financial year.

Medical devices, pharmaceuticals and consumer goods manufacturer Johnson & Johnson faced the challenge of assessing over 10,000 job applications in the UK and Ireland each year, without sacrificing the candidate experience.

It worked with Saville Assessment to design an assessment tool that could screen thousands of graduate and placement applications efficiently, while giving candidates insight into the organisation’s culture and its work. Occupational psychologists were used to understand roles and culture and a situational judgment test was introduced and trialled with employees to create a scoring system.

Saville Assessment’s Role Fit gamified job analysis app also allows the company to rank job-relevant competencies in order of importance through a series of card-sorting exercises. Assessments are selected based on the level of the role and the results are used to understand how suitable an applicant is.

Johnson & Johnson found that placement students who were successfully offered a graduate position tended to perform between 10%-25% better in their online assessments compared with those who weren’t, which shows the online assessment stage is able to predict future performance.

Increased automation has helped reduce costs and the assessment process has seen high levels of engagement and low drop-out rates; 99.4% of 7,000 applicants who started the Graduate and Placement Situational Judgement Test went on to complete the assessment.

After the tragic death of a diner who had fallen ill after eating at one of its restaurants in 2016, Mitchells & Butlers committed to ensuring that employees were well-equipped with the knowledge needed for their roles and apply it back in the workplace. Training was inconsistent across its 1,700 premises, so a digital learning platform was needed.

The company spent 18 months delivering its learning system, called Mable, which offers a mobile-first, personalised learning experience that employees can access at any time. Ninety per cent of content is developed in-house, allowing the L&D team to refresh content as they see fit.

The system also uses gamification to give staff an incentive to learn. Employees earn points, receive badges and rankings, when give them access to new levels.

On average 22,337 people log in every month and the firm’s Mable user feedback survey found 64% of respondents log into Mable via a mobile at least once a week and 74% said the learning system was engaging.

After finding it was spending 587 days a year on transactional HR activities, technology firm Open GI wanted to streamline HR processes by moving to a self-service HR system. Reducing the amount of manual admin tasks they had to do would allow the team to spend more time on continuous improvement activities and help meet the company’s wider goals.

In the past it would take the HR team nearly one day per month to input holidays and other types of leave, not including the time taken for staff to complete and submit the relevant paperwork. Reporting was also difficult and the HR team had to look at sickness absence data manually, working out how many sick days each employee had already taken.

It sought an HR system that would support the entire employee lifecycle, from recruitment to performance management, and would integrate with its third-party e-learning and payroll system. Cezanne HR’s International SaaS HR system was found to be the best fit.

All data was migrated across to the new system within a few weeks. Employees can now log holiday and other absences through the app and line managers now have complete visibility over their teams.

Open GI estimates it is seeing overall cost savings of around £2,700 per month because less time is now spent on data entry. Efficiency gains have enabled the firm to take on a further 200 people across three countries, with the addition of only one administrative team member.

In 2016, Rolls-Royce embarked on a project to transform its onboarding experience into a process that would both engage and inform new starters and set them up for a successful career at the company.

The experience was globally inconsistent, overly long and complex: staff were sent emails containing 16 separate attachments which created confusion, and staff and their managers reported that they did not have the tools or support needed.

This led the firm to develop a website that welcomes every starter personally and delivers them tailored content around the company’s values and ways of working. The site is integrated with its HR system, so that once candidates have accepted their offer their details are automatically added to the system. The recruitment team have regular check-in calls with managers to explain the benefits of the tool and ensure they have everything they need to welcome their new employee.

IT communications were also improved for both hiring managers and candidates. A tech bar was introduced so that staff could pick up their IT equipment and passwords instantly on their first day.

Banking group Santander found the content in its LMS was inflexible and was poorly laid out, which meant uptake was low for non-mandatory content. It wanted to develop a culture of continuous learning, but its system did not support this.

It partnered with Digital Balance to create a customisable suite of connected sites, called MIO, with a single sign-on access point and the ability for user feedback to be given in real time, available at any moment and on any device.

Video content and project-based learning activities are available, as well as various other bite-sized learning tools. A Facebook-style site that enables collaboration between and within teams was developed as part of the suite, which allows users to add posts and react to videos and view upcoming learning events.

Users can “pin” content to their MIO homepage and prevent content getting lost in their emails, while content is kept relevant and personal to different groups of colleagues. Personal development plans can also be created, while users can create projects to work on.

The company expects to see an increase in the number of MIO sites added to the suite, while more video “genres” will be added to its portfolio.

Although it has been on a journey to modernise its business and create a workforce of “proud colleagues”, the Co-op’s scheduling and timekeeping system for its retail business remained antiquated. Only 11% of its workforce were able to access the system, mainly store managers, so staff would rely on them printing out shift rotas or sharing them over WhatsApp to find out when they were due to work.

Rather than reinventing the wheel, the organisation decided to give the system a more user-friendly front end with a smartphone-first design that all retail staff could access. The new website, called Shifts, gives all 45,000 employees the ability to see the rota for their store from anywhere, at a time that suits them.

After finding that some stores were not following the policy of giving employees a rota for the next three weeks, it developed Shifts so that it always shows this time period regardless of whether the store manager has updated it or not, giving managers extra motivation to prioritise the allocation of shifts.

The organisation claims that Shifts has had a positive impact on wellbeing because staff now have a clearer view of their working weeks and what their break and holiday entitlements are. It also allows staff with flexible working hours to budget and anticipate what their pay will be and managers are now providing staff with better scheduling information.

It estimates that introducing Shifts has helped save £1.5 million per year and has freed-up time for managers to spend on other tasks and serving customers.