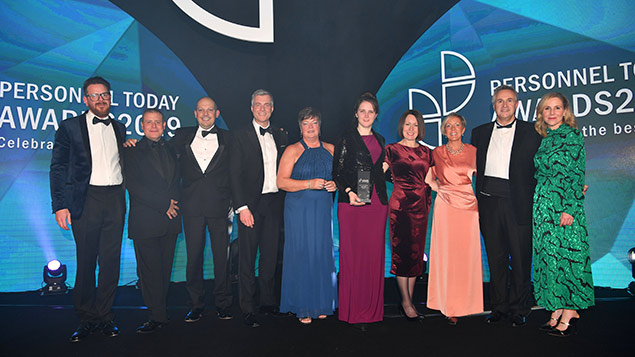 The Co-op has won the “best of the best” trophy at the 2019 Personnel Today Awards.

The group, which has 3,750 outlets and around 70,000 staff, was shortlisted for three awards and scooped the Apprenticeship Employer of the Year for what the judges described as an ambitious programme “to transform retail jobs into retail careers”.

Co-op then received the Overall Winner trophy in recognition for what it has achieved with its significant reduction in staff turnover, high engagement scores and an improved talent pipeline.

The audience was entertained by stand-up comedian Zoe Lyons, before Sally Phillips, star of I’m Alan Partridge, Miranda and Smack the Pony, hosted the Awards ceremony.

Rob Moss, Personnel Today’s editor, said: “Tonight’s winners demonstrate the diversity of ideas in HR and L&D – there really is loads of great ideas and good practice. Congratulations not just to the winners but to all of those shortlisted. It’s been a terrific night.”

Online retailer Studio was awarded HR Team of the Year, presented by our gold sponsor PeopleScout, for the huge impact that people management had on the organisation’s culture, bringing benefits to colleagues and customers.

Mitchells & Butlers won L&D Team of the Year for a second year running while Great Western Railway and its sister franchise South Western Railway both collected trophies, for health and wellbeing and managing change respectively.

HR Team of the Year, sponsored by PeopleScout
Studio.co.uk

Apprenticeship Employer of the Year
The Co-op

Award for Innovation in Recruitment
Dstl

Award for Excellence in HR through Technology

Graduate Scheme of the Year

Consultancy of the Year