By Laura Chamberlain on 15 Jul 2011 in Personnel Today, The HR profession 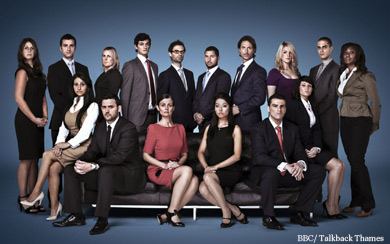 The Apprentice Analysed, written by occupational psychologist Professor Binna Kandola, has correctly predicted the final four candidates making their way to the final this Sunday.

Susan, Jim and Tom were picked out as the strongest candidates as early as week two and, as the series progressed, Helen gradually climbed her way up the table to join Tom in third place.

Professor Kandola, of business psychology consultancy Pearn Kandola, has given Susan top spot in the Apprentice league table since week two, the first week the candidates were ranked, although second-placed Jim did steal her number-one position a couple of times in the early stages.

The programme’s new format means that Lord Sugar is looking for something a little bit different from his candidates this year. Apprentice fans may have wondered what happened to the infamous interview stage in week 11, which was replaced with a food-related task; however, the interviews have been shifted to the final, where the candidates will be grilled on their business ideas by Lord Sugar’s crack team of business minds, including former Apprentice regular Margaret Mountford.

The change reflects the new format of the show, which rewards the winning candidate with a £250,000 investment in their business idea, along with a partnership with Lord Sugar, instead of the previous prize of a six-figure-salary job.

So which candidate has the key business skills vital to winning over Lord Sugar?

Professor Kandola said: “Susan has always been the most interesting candidate. She appeared to freeze with the pressure early on to the extent that on occasion she seemed incapable of talking. She has been constantly underestimated by the others and some have tried to intimidate and even bully her. Despite all of that she has bounced back, not borne grudges, and, more importantly, learned from the experience – a truly resilient character. Her breadth of vision, positive attitude and understanding of customers mean that she is very good at sniffing out opportunities.

“Jim has shown himself to be a very good team player but a not such a good team leader. This isn’t necessarily what you’d expect from someone who is rather arrogant. But he knows what he’s worth and wouldn’t be afraid of letting you know that if he didn’t feel valued as much as he values himself. He hasn’t really developed or grown as the process has gone on and so may be lacking in potential.

“Tom is the ideas man. Generous, agreeable and likeable. He doesn’t like to take the lead and consistently has been more than happy for others to project manage. This is more than just being tactical, I believe, but is more of a real reluctance to be in charge.

“Helen has gained more prominence as the series has progressed and has shown herself to be a highly capable leader and project manager. She is calm, decisive and has shown herself capable of keeping all of the strong personalities working together productively. These are great qualities to have and any budding entrepreneur doesn’t only need to have a good business proposition but also needs to bring it to market as well as building the skills and capabilities in the team. Helen can do all of that – but does she have a great idea to begin with?”

The final will take place at 9pm on Sunday on BBC2. Find further insight into the Apprentice finalists on Personnel Today’s blog The Apprentice Analysed.