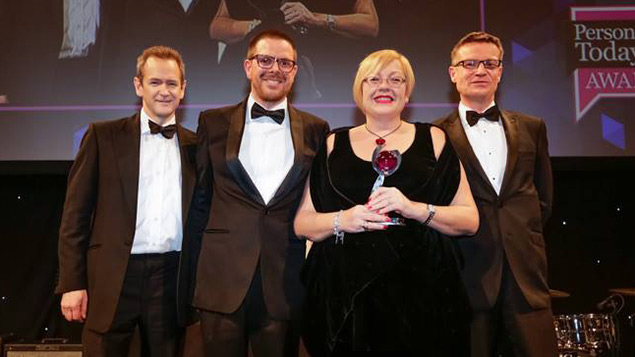 Like all gracious winners, Sarah Trota, executive director of people and business transformation at Circle Housing, says she must thank her team for helping her to be named Personnel Today HR director of the year.

Her trophy takes pride of place “above the confidential shredding” in the office, rather than her mantelpiece at home. “I’d never live it down if they caught me sneaking it away and polishing it,” she laughs.

“You’re only as successful as the people you work with. I’ve got some cracking leaders on my team, and I’ve been able to empower them so I can do my stuff while they crack on with service delivery,” she adds.

Trota believes her entry stood out from the competition because of its breadth. The judges remarked on the level of transformation she has overseen; Circle has grown rapidly since 2005 through acquisition, and the housing sector itself has been subject to change because of alterations to the welfare system.

Trota and her team have helped to deliver £1.5 million in efficiency improvements, undertaking a thorough review of HR processes. In recruitment, looking closely at how pre-employment checks were conducted has saved 50% in terms of time and money. Changes to the way the organisation approaches repairs and maintenance, meanwhile, will save £120 million over 10 years.

She admits that the scale of the changes that needed to be made was daunting, but has learnt from the experience: “We don’t sit on our laurels, and we’ll be embarking on another major transformation project soon. We’re in good shape for the next stage – what we’ve already done has enabled us to see where we delivered value and where we could do better.”

One of the things Trota is most proud of is her work in developing leaders at Circle. The company runs a series of events called the “Leadership Space”, where senior managers can get together and share ideas and improve their understanding of the business. Thanks to this and other internal initiatives, leadership engagement has improved from around 50% to 80%, according to Trota.

This investment in leaders is also reflected in an impressive talent pipeline through the business. Around half of the executive team worked their way up through Circle, while internal promotions in the leadership population as a whole are up 60%. Improving the longer-term career prospects for women is also high on the agenda – Circle currently has a 100% return rate for women on maternity leave.

Circle’s entry for the Personnel Today Awards was notable for its focus on evidence, and Trota says measurement is a crucial part of the transformation journey: “It’s a cliché, but what gets measured gets done; showing that you’ve done what you set out to do is important. It’s not arrogance, it’s taking stock.”

Keeping an eye on the figures also helps to keep Trota and her team grounded – a key benchmark they use is the £1,500 it costs to convert a shower so that one of their residents can wash independently. She adds: “We’re constantly asking the question: ‘Should I spend my time or money on this?’”

Receiving external validation for what Circle has achieved has been a highlight. “One of the things we’re most proud of is that we’ve been benchmarked against organisations from many sectors, not just housing,” says Trota, who is eagerly anticipating her role as judge in the HR director category this year.